On the 4th Sunday of Great Lent, dedicated to Saint John the Ladder, we heard the Gospel reading about the healing of the son of a man (Mark 9.17-32). The boy was insane, says St. Matthew, possessed by a dumb and deaf spirit, says St. Mark, who tormented the boy from childhood, throwing him into water, into fire, seeking to kill him. It was slamming the boy to the ground, causing him to have convulsions and to foam at the mouth. 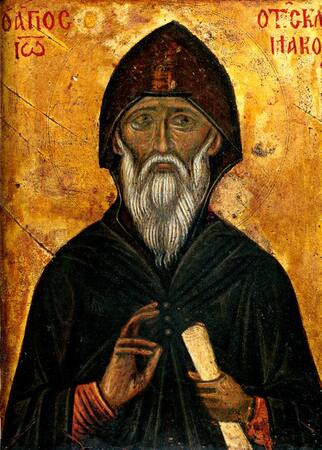 However, we are interested in how the miracle happens and especially what the father did, or what he had to do for it. The Savior had been on Mount Tabor with the three disciples, and when He was coming down, this man came to Him. And he tells the Savior that he came to His disciples with his son, but they could not help him. The Savior is saddened for the father’s unbelief, but also for His apostles’. Then the child’s seizures begin, and the Savior asks since when the boy had been like this. In a way, the Savior is taking His time, because the father was not engaged with the real problem. He was full of grief, but in fact, he was not in communion with the Savior in his heart.

Many times, we are also outside our heart and we do not speak from there, but only absentmindedly, so that we have something to say too. Most of the time, our word does not represent us really. It is not from our heart. And this is the tragedy of our world, says Father Zaharia Zaharou.

The Savior does not ask as if He did not know, but because the boy’s father was not ready. The father answers and concludes by saying: “But if You can do anything, have compassion on us and help us.” (Mark 9.22). It was clear that he was in great pain, seeing his child in the midst of seizures. But even if he was suffering, he wasn’t asking the right question. And the Savior brings him to his heart saying: “If you can believe, all things are possible to him who believes.” And then, the Gospel tells us, the father shouts immediately: “I believe, Lord, help my unbelief!”. Until then, he only saw that someone else was to blame: the apostles because they could not heal his child, the Savior because He could heal but, but was not doing it, etc. And the way he phrases the question, “If you can do anything,” shows that he was not in his heart. So the Savior shows him that healing depends on himself. This is the explanation: what is around us depends on what is within us.

If we do our job correctly and pose the right question, that is, to investigate what hinders the grace of God in us, then yes, the problem is solved. And this is what the Savior showed him: the problem is with you, in your heart. In this case, unbelief. In other cases, passions or other things.

God does not leave us without us crying out from the heart, without us becoming truth. This man became true. What was in his heart, his little faith, he said, “I believe, help my unbelief.” So he said what he had within, but it was truth and he cried from his heart. This is what the Savior needed. It is very interesting!

Let us reinforce this with a word from Father Aimilianos of Simonopetra: “Let us not deceive ourselves, God certainly exists, but for us He does not exist when we have not felt signs of His existence, when He does not leave an imprint on us.” So, make no mistake, God exists, but if we do not make Him alive in our heart, He does not exist. And so continues Fr. Aimilianos, “When we labor and have pain for God in our heart, we have the right to ask for the Holy Spirit. Otherwise, we will only talk about Him, but we will not be able to say that He rebaptized us, that He kneaded our life with spirit, salt and fire.” So, being true in God is not something comfortable, but it is an outcry. It is the same in our life, so let’s not run away from these, because they are what make us true and give birth to the true prayer in us.

What has been said so far is also being mentioned because I met people who deal a lot with the evil in the world, especially now. And we object against what is happening, not against the evil, because it pains and overwhelms us, especially the prospect of its increase, but against the fact that much fanfare surrounds this evil, and thus the attention of our hearts is drawn away from itself, where it should be. If I look at what’s going on in the world and I forget the evil in me, what have I done? Because that’s what I was talking about: the evil in me is the only tragedy in the world! The fact that God does not exist for me, that is the tragedy. He exists, but where is He?! Because in my heart I do not find Him.

The fact that I am called insistently to look at everything that is going on around me robs me from my heart. Moreover, as the desert fathers say, I begin to mourn the dead of others, and mine remains unmourned. I end up condemning the evil in others, and that prevents me from seeing the evil in myself. Without realizing it, I prevent God’s grace from coming into my life, healing me, and healing others. If I am truly healed and can truly sit at the Savior’s feet, then I can truly pray for the evil in the world and for others. But not the other way around. If I start with the outside, I am no longer true. I’m out of my heart and I end up doing something totally hurtful, judgmental, and that hardens my heart. Therefore, if it helps me to repent, yes, I can take an interest in the evil in the world. If, seeing all the evil in the world, I say and believe that it is the fault of my sins and cry for it, yes, it is useful to contemplate this evil. But if, on the other hand, the evil in the world gives rise to rebellion, condemnation, etc. in me, I must stop.

The difficult situation in which the world finds itself, and the evil in it, must urge us to work, not to remain insensitive. But the work is done starting from our heart, bringing repentance to God. May God help us, with the help of the prayers of Saint John the Ladder, to become true.

The Mechanism of the Fall

The Bread of Life