The Sunday before Great Lent, when we commemorate the expulsion of Adam from Paradise, is also the Sunday of Forgiveness; a tradition that is holy, beautiful, and Christian. Our faithful, following what the Gospel says: “If you want God to forgive you, you must forgive others” (Matthew 6.14), forgive one another this Sunday, and in this way begin the fast.

And, because we are on the Sunday of Adam’s expulsion, let us contemplate the way of the fall, because in general we often follow the same path. We recall Chapter 3 of Genesis: “And the serpent said to the woman, ‘Has God indeed said, ‘You shall not eat of every tree of the garden’?” (Genesis 3.1). We see that from here the fall begins. From the beginning, a sliver of doubt slips into the conversation with this thought, “Really?”. But the fall is not yet complete. And the woman said to the snake , “we can eat from the trees of Paradise, only of the fruit from the tree in the middle God said to us, ‘do not eat from it nor touch it, so that you may not die.’ Then the serpent said to the woman, ‘You will not surely die’” (Genesis 3.3-4). From this moment, the rest are minor details. 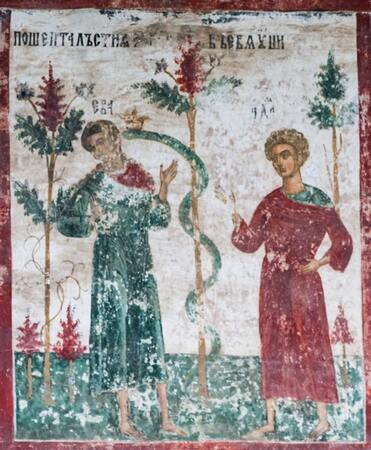 The snake overstepped. And the woman, choosing to continue the conversation, is fully in the fall. Here is the problem. The fall is taking part in the conversation that denies and relativizes God. Well, we do this every day too. In the news, in television or radio broadcasts, in other media productions which we watch, we receive this spirit of denial, of rejection of God. Then we become situated in a state of distance from God, and our fall is near. If we take our eyes off of God, we are very vulnerable. And this is what the Holy Fathers say, that the strategy of the devil is to drag man down to earth, to bring him down from Heaven, because on earth it will be very easy for the devil to kill him.

So, the enemy’s strategy is this: to attract our attention, to lure us into “discussion” with him. And he presents this discussion in thousands of forms. The same way an arbitrary show in mass media is made of anything, of any suffering, of any joy: it’s a show. The suffering one sees on TV does not prompt one to repentance, nor the joy to gratitude. Through these, the evil one keeps you in his world, far from God. It is important for him to keep you captivated, no matter which way. Let us understand these things and take our eyes off his display! It has a very strong, hypnotic effect on us. It tricks us easily and captures our attention. And not only through sinful things, like pornography and others, but many other things that keep us busy, and by following them, we are in the state in which the woman Eve was when she talked to the snake.

But let us look at another style of speaking that he uses towards us constantly. For example, we fall, we commit sins. Then he makes a whole case out of it: “Hey, what did you do? How could you do that? You’ve let yourself and the others down!” and so on. We must understand this. This is not repentance. He causes our fall, then wants to keep us there. It’s not like that with God. To understand this, let’s go back to the Egyptian Pateric. Someone asks Abba Pimen, “How long will sin have power over man?” And Abba Pimen answers: “Until he says ‘forgive me’”. The man said “forgive me”, that’s it. Without making so much nonsense. We write it on the confession list, we go to confess it and that’s it, it burns. But the enemy makes a whole drama out of our downfall. Why? Because he wants us to be attentive to him. And in many other ways he captures our attention and thus turns our gaze away from God.

That’s why fasting, suffering, reading the words of the saints, participating in Church services and whatever else we do like this, means to take our eyes off the enemy, from material things, and to turn to God. But as soon as we take our eyes off God, and as soon as we step into the world of the evil one and partake of his spirit, we leave God. And this is felt with the heart, not with the mind. The human mind is rather stupid. Especially when facing the snake, who is a professional. As Saint Paisios of the Holy Mountain used to say, the smallest of the demons beats 1000 lawyers without a problem. And our mind is like a chicken (much less a lawyer) fighting a snake. That is why the Fathers say, do not converse with temptation. If you committed a sin, you do not speak to the evil one, you do not give an account to him. The Savior has already come and you have someone to talk to, Him. He became filthy to talk to you. Talk to Him. You can’t say that He doesn’t hear you, because He came for you! But, again and again, the enemy wants to make us pay attention to him.

I repeat, the mind does not realize that it has taken its eyes off God, because it is like a chicken fighting a snake, but the heart feels this. The heart gets upset and loses its peace. The heart is the first to detect when something is wrong. Then we stop and start a prayer, a chant, a troparion, whatever. It doesn’t matter why or how we got there, away from God. It is important to return home immediately, through prayer, singing, etc. That’s what Saint Porphyrios also says, “Don’t take care of the weeds; water the flowers!” And when you are tempted, don’t fight the temptation, because it will entrap you stronger, but rather, raise your hands to the Lord, to the Mother of God, to the Saints, and that’s how we will be saved. Just as the baby, who has no strength, is freed because it cries out to its mother, who has a lot of strength, so we too must learn to run to our Lord.

Let’s take our eyes off the enemy’s parade and fix them on God! By singing, by reading the Gospel or psalms, by repentance, by meditation, by any beautiful thought. This must be part of our fasting, the detachment from evil and the attachment of our soul to God. Of course, that’s why we also help ourselves with the food fast. To reinforce what was said, we can also use psalm 63: “Hear my voice, O God, in my meditation; Preserve my life from fear of the enemy. Hide me from the secret plots of the wicked, From the rebellion of the workers of iniquity, Who sharpen their tongue like a sword, And bend their bows to shoot their arrows—bitter words, That they may shoot in secret at the blameless.” Here, the work of the enemy that I was talking about is described. He aims at us with all kinds of arrows to divert us from our purpose. It says, “in secret”. He works in hiding. And further, “Suddenly they shoot at him and do not fear. They encourage themselves in an evil matter; They talk of laying snares secretly; They say, ‘Who will see them?’ They devise iniquities: ‘We have perfected a shrewd scheme.’” and thus: “Both the inward thought and the heart of man are deep.” This is his purpose. To penetrate deep within us and grab our attention at any cost. And to penetrate into “his depths,” because man has great depth. “But God shall shoot at them with an arrow; Suddenly they shall be wounded. So He will make them stumble over their own tongue.” So, they will easily show themselves, if we wake up and realize it.

So, let us start the fast knowing that we are doing it for God and our souls. Let us ask Him to strengthen us not to stay in the enemy’s parade, to take our eyes off of it, and to go to God and there only. Amen!

The tragedy is being far from our hearts