Today, on the 4th Sunday after Pascha, we heard the Gospel of the healing of the paralytic at Bethesda (John 5:1-15), who had lay there sick for 38 years on his stretcher and who tried to obtain healing from that miracle that occasionally occurred when an angel descended and stirred the water. The Holy Fathers arranged for this Gospel to be read today because it accurately depicts our souls. As the troparion says: “Raise my paralyzed soul, O Lord.” Paralyzed by evil deeds and by other factors. Especially in our times, I think many of us feel like our souls are paralyzed. We wake up in the morning and maybe we don’t have zeal or motivation, especially in a society like ours in which we work so much, we give so much of ourselves. So, many times, we are like the paralytic we just heard about. Today’s Gospel is not something that doesn’t affect us. Yet our Lord, again and again, every day, comes even to us and He heals and strengthens us. He resurrects us every time. And we are grateful for this. Then we hear His word to the former paralytic: “See, you have been made well. Sin no more, lest a worse thing come upon you.” 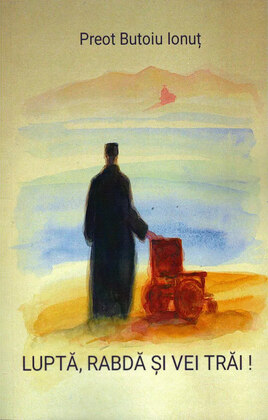 But before delving deeper, let us consider the example of Father Ionuț Butoiu, a priest from Câmpina in Romania, who several years ago went for the first time to the sea, where he slipped and fell headfirst, severing his spinal column. Simply the fact that he survived and now can walk is impressive. But personally, I am even more impressed by how he was healed. When he was still submerged under water, being paralyzed and not having anyone to rescue him, he heard the voice of the Mother of God saying: “Take him out of here!”; and he awoke on the shore. From here, his odyssey and his fight against death began. He told his story in a book entitled: “Fight, be patient, and you will live!” This was the word which the Mother of God told him later, in the hospital. From the beach, they took him to a hospital in Constanța and from there directly to Bucharest. He was at risk of dying; the possibility of walking wasn’t even on the table. When the doctor, Eduard Exergian, told him that he has only a few hours to live, he replied: “Come on, doctor, the Mother of God didn’t take me out of the water for me to die now.” This is impressive, his great faith in such a situation. And this faith stayed with him throughout the entire healing process. The doctor then told him he has an idea: to put a metal frame in his head without anesthesia, and if he endures for 7 days like that, to perform surgery on him. He endured those days, after which he heard a voice saying: “You will live, you will walk, and you will build the church.” It was like a whisper. That’s how God speaks to us. But it’s not evident that He is speaking and later we might even think that we imagined it or that we were hallucinating, as Father Ionuț testifies in the book. He says now that he’s convinced it was the voice of the Mother of God. And in 2016 he finished that church. Very well, the doctors performed surgery on him, but they told him that even though he survived, he would never walk again. But eventually he began to walk. Miracle upon miracle. But the most impressive thing was his faith the whole time. The steps of his healing, which lasted a year or two, were not at all clear. If you want, today’s episode with the paralytic, whose healing took just a few seconds, was played out in this priest over two years. That’s why our Lord asks: “Do you believe?” Let’s ask ourselves this question. Do we believe or not? This priest’s faith was exceptional, as can be seen by how much he struggled, week after week, to recover completely. Another beautiful episode followed: Holy Unction was served for him with many priests and believers present, and he was still in a wheelchair. Before the meal that followed, one of the other priests said: “I think Father Ionuț should give the blessing now.” And to everyone’s surprise, he stood up and blessed the food. Afterwards he remained in his wheelchair for some time until he could walk. The example of this priest is impressive and we see how important his faith was.

We are not paralyzed physically, but spiritually. At least in things pertaining to God, such as prayer, prostrations, going to church, and other good works, we are often paralyzed. God has helped us throughout our life, He worked miracles in us and I think each one of us knows in his heart just how many times God resurrected us, supporting and encouraging us with His grace. Yet we continue to fall.

But today, I would have liked to pinpoint a major paralysis, maybe the greatest one we face: from the Fall until now we succumb easily to the whispering of the devil. This is our greatest weakness ever since the question entered Eve’s soul: “Has God indeed said…?” (Genesis 3:1). From then on, we believe him outright, without doubting or even questioning from where or from whom this whispered thought comes. We need to be very attentive, because the devil provokes us to doubt and overturn everything that God has worked in me up until that moment. For example, we go to Liturgy and we return home renewed, resurrected, strengthened, trustful. But then, in the afternoon, the devil approaches us with some thoughts: “Do you really think you’ll succeed? Do you really…?” Let us be attentive to this paralysis.

We see God (with our heart), we feel how good and strong He is, that there is no death from which He cannot resurrect us. But we need to be faithful to His word, to His grace, to the trust He gave us! This is why our Lord says: “O faithless and perverse generation, how long shall I be with you?!” (Matthew 17:17). Or elsewhere: “Unless you see signs and wonders, you will by no means believe” (John 4:48). From here we understand that it was sufficient to see Him – what a special man, what goodness, what love, what gentleness, what consolation – and that miracles were not needed. So, let us take note and be faithful to our Lord, to His presence in our life. As our saints are; they are the model. Father Arsenie Papacioc said: “The strongest prayer I ever prayed in my life was when I was blowing into my hands in the freezer in prison, trying to stay alive.” Why? Because the circumstance in which he found himself testified that he was faithful to God. God was not visible anywhere in prison; on the contrary, the devil appeared to be all-powerful. But by enduring, Father Arsenie showed that he is faithful to God. Therefore, we need this level of faithfulness in God. May we despair no longer! We should be attentive because we are very weak when it comes to thoughts from the devil. He comes with questions like this: “Do I really need to stay with this man (my husband) or this woman (my wife)?” But God says: “If I told you once (at the Marriage Service, and until then), why do you keep asking Me over and over again?!” There are so many questions full of doubts that assault us, depending in what context we each live. Very often, we are tempted to doubt God’s presence in our lives. But when He told us once, that’s how it will always be! We, however, shake like a leaf.

I gave several examples so that we can learn how we should be in our relationship with God. Much more faithful!

May you be filled with all the fullness of God (Ephesians 3.19)