It is said that in the Egyptian desert, during the time of the great Elders, all these Elders gathered, seeking the answer to a question: Which is the greatest virtue? The responses were diverse, with all the Fathers trying to bring forth arguments: whether for love, or for humility… In the end, they all reached a consensus: The greatest virtue is discernment, the discerning of spirits! It was difficult for those Elders illumined by God – how much more difficult it is for us to find answers to so many other questions! Yet all things considered, it should be much easier for us, because they, our Fathers, did everything for us. They granted us nourishment in abundance to help us along the path to salvation. But, even more so, they granted us spiritual logic! If we appeal to this spiritual logic with humility, we will find our way with much less effort. We agonize, the world around us agonizes, for behold: we haven’t fully escaped the pandemic and the war is already knocking on our door. And we… we agonize, we become troubled, and we strive to trouble even those around us, because, obviously, now there is no time to sleep; we must do something! 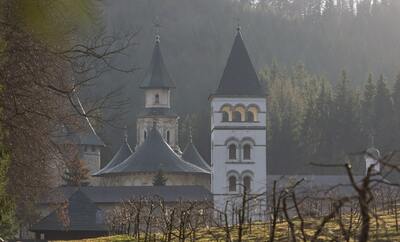 Let us consider more attentively this “We must do something!” First of all, the Fathers never insisted, they never forced anything. Elder Aimilianos of Simonopetra said that “must” is not an Orthodox word, for “it doesn’t excite!” Next, doesn’t the phrase “do something” actually reveal that until now, we haven’t done anything? Shouldn’t we, who are yelling at others to do something, ask ourselves if possibly by this, we – as the Romanian saying goes – are seeking to busy ourselves? Yet this is not the true problem, but rather the fact that we don’t pay any attention to the words of our Savior — and why is it that during the first days of Lent, we didn’t realize that we heard precisely these words in the Gospel readings at Great Compline, yet we realized during these same days that the war was in full swing?

“For nation will rise against nation, and kingdom against kingdom. And there will be earthquakes in various places, and there will be famines and troubles. These are the beginnings of sorrows” (Mark 13.8).

“But when you hear of wars and commotions, do not be terrified; for these things must come to pass first, but the end will not come immediately. Then He said to them, ‘Nation will rise against nation, and kingdom against kingdom. And there will be great earthquakes in various places, and famines and pestilences; and there will be fearful sights and great signs from heaven’” (Luke 21.9-11).

“… Now when these things begin to happen, look up and lift up your heads, because your redemption draws near” (Luke 21.28).

“… But when you hear of wars and rumors of wars, do not be troubled; for such things must happen, but the end is not yet” (Mark 13.7).

Our fathers taught us one thing, namely that he who worries himself in his obedience is no longer under obedience! This phrase – “for such things must happen” – reveals divine Providence. These are the things that God takes care of Himself! If we would be obedient, we would not become agitated or frightened, because the Father is at the helm; it is His work to take care of these things. Again, if we would be obedient, we would very quickly attain to this virtue of discerning the spirits. Father Dionisie of Colciu (Mount Athos) said that to whomever practices obedience, God gives humble-mindedness as a gift and, he added, without humble-mindedness, we cannot pray!

Indeed, in these Gospel readings we also heard Christ imploring us to watch and to pray. We cannot, however, as Father Dionisie said, pray without humble-mindedness. Again, an Elder from among the Desert Fathers said that for whomever bears a grudge against someone else, that grudge will become a stumbling block at the time of prayer. Can we possibly rise up in someone’s defense, without beginning along the way to denigrate the person with whom he is in conflict? How do we prove that we have discernment, if we confuse everything in such an unforgivable and unforgiving way? How do we prove that we are following the Son of God in His obedience unto death, if we, instead of discerning between people and demons, create distinctions between persons – without caring whether, by doing this, we are actually dividing them into brothers and enemies?

We are truly humbled by a child, just five years old, who said that “for the one who has God, all people are his relatives”! Likewise, Elder Aimilianos said that the Church is in crisis because, unfortunately, it has sought inspiration from the State, and instead of organizing herself as a family, she organizes herself as an institution.

The time has come to assume serious responsibility for our salvation and eternal life, and to ascend like an eagle that gazes far and wide, and to not become worried like roosters that, after climbing a mountain of garbage, consider themselves superior and more informed! “Earnestly desire the best gifts,” as Saint Paul said (1 Corinthians 12.31). The time has come to seek the greatest virtue, discernment, and attaining this is not hard for the humble man, the obedient man. Scarcely the humble man lays a foundation for prayer and yes, he will feel that he is “doing something,” for God looks upon him: “But on this one will I look: on him who is poor and of a contrite spirit, and who trembles at My word!” (Isaiah 66.2). In such people, the Spirit Himself prays with groanings which cannot be uttered (Romans 8.26), for in them beats a heart belonging to a son of God and to a brother of all mankind!

Pastoral Letter for the Feast of the Lord’s Resurrection 2022