We add to the testimonies about the holiness of Archbishop Victorin’s life the following two, which are related to his funeral at Holy Putna Monastery, on July 22, 2001. As a reminder, he passed away on July 16, in Detroit.

At the gate were His Eminence Iosif [Pop], His Eminence Bartolomeu Anania, His Grace Gherasim [Cucoșel], His Eminence Pimen [Zainea], Father Abbot Melchisedec [Velnic], and many local priests. Everything took place between 12pm and 3pm. Before the coffin arrived, the sky darkened. In the middle of the day, it darkened. And I told my companions: “A saint is coming.” I had heard that someone was coming to be buried at Putna.

When they started ringing the bells, I ran to the gate and saw what I have recounted thus far. Afterwards, until each of the hierarchs said a short word, a few priests hoisted the coffin on their shoulders. And from the gate to the church, there was such a heavy downpour that everyone was soaked to the bone. We entered in after them.

Later in the evening, I wanted to stay to keep an all-night vigil because if I felt that a saint had arrived, it meant that I had to stay. The coffin lid was closed shut. When I saw that it was 10pm and they still hadn’t opened the lid, I said, “I won’t stay. If I can’t even see him, what’s the point?” And I returned home.

In the morning, when I came, upon entering through the gate, I saw His Grace Gherasim and Father Abbot speaking outside the north wall of the church. I stood at a respectful distance to not eavesdrop. And then they entered the church. I followed them in and stopped on the doorsill. From there, in wonder, I saw the coffin was open. His Grace Gherasim venerated the body and suddenly a pleasant fragrance came all the way from the coffin to the door of the church, where I was. I was in awe. And I said to myself, “Two saints have met.” Father Abbot also venerated. A second wave. For me, these were absolute wonders. I had never smelled such an aroma before. After they venerated, the church being empty, I said, “I will go venerate too.” I venerated, I kissed the holy relics, and just like before, a wave came over me… it was the same fragrance that I smelled on the doorsill. And I thanked God in my mind for this.

I looked in awe… he was so white! His hands were placed one over the other. His veins were very blue. Underneath his skin, there was so much light! White, white, white. A translucent white. And his veins were so blue. It was as if there was neon under his skin. What a beautiful sight! I don’t think he decayed.

Every time I go to the cemetery, I venerate his grave. I say the Our Father and …

A luminous, living, and fruitful memory

Regarding His Eminence Victorin and his arrival at Putna to enter into his eternal rest, my memories begin thus: with the emotion of awaiting the car that was bringing the coffin, in the evening. The atmosphere was unique, the fathers had gathered by the gate, together with His Eminence Bartolomeu Anania. Storm clouds were approaching. When His Eminence Victorin’s arrival drew near, the clouds seemed to approach us even more. 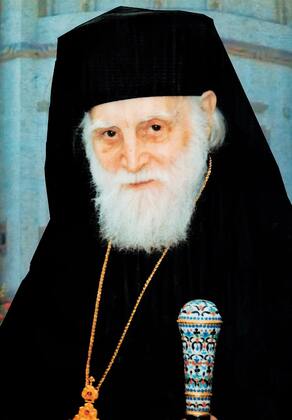 The car arrived, everything was put in good order, the Trisaghion was served, we entered the church, being flooded by an extraordinarily torrential downpour. The power went out. Those of us busy with our obediences, especially in the kitchen, did not have time to venerate His Eminence’s coffin that evening. On the other hand, the next morning, on my way to the kitchen, I passed by the church, in the narthex, where lay the coffin with… this is really the word that comes to me, the relics of His Eminence. Why do I say relics? Because this is how I felt there, as I stood near and venerated and lifted up a thought, a prayer, near the coffin. Everything seemed as if you were next to a great saint. You could feel a unique power, a particular warmth, something indescribable. And thus, at a loss for words, I went to my obedience. But from then my soul retained a luminous, living, and fruitful memory. It is something you live, a feeling that you live very rarely and in exceptional circumstances, in exceptional places, in the presence of select people… Yet here we are effectively dealing with a special grace that His Eminence obtained throughout his pious life, which he offered as sacrifice to Christ.

These are my memories tied strictly to that moment. The joy, peace, and calm that I felt there would have made me stay there continually.

“Sealed Vessel of the Holy Spirit”

Open the door of your heart unto all