The third spiritual evening within the educational program Exploring Your Faith! took place on January 21, 2021, online, on the YouTube channel of the monastery.

The theme of the evening was entitled Isaiah: The Old Testament Evangelist. “There shall come forth a rod from the root of Jesse” (Isaiah 11.1). This coincided beautifully with the end of the winter feast days, as many of the prophecies of Prophet Isaiah are related to the Birth and Appearance of the Savior. 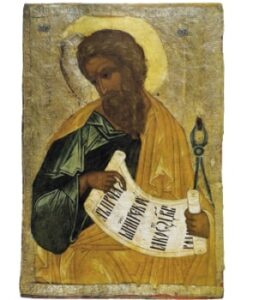 The Holy Prophet Isaiah (yüša`yähû, Yahweh is salvation) was an aristocrat of royal descent from the eighth century BC. He prophesied during the reign of four kings (Uzziah, Jotham, Ahaz and Hezekiah) approximately 736–687. He recommends his book as a revelation/vision (Isaiah 1.1: “The Vision of Isaiah, the son of Amos, about Judah and Jerusalem”) for distant days. This perspective is also supported by other texts contained in the book: “Now go, write this on a tablet before them, and write it in a book, that it may be for a future day, as an everlasting testimony” (30.8).

The existence of the Holy Prophet Isaiah is also attested historically. Thus, in 2018, a seal was discovered that contains the inscription: [belonging] to Isaiah the prophet, right next to the place of the discovery in 2015 of another seal that belonged to King Hezekiah.

Also, the discovery of the Qumran manuscripts (1947) had an overwhelming role in the study of the book of the prophet, because a manuscript (1QIsa) containing the full text of the book was discovered in cave 1 at Qumran. The text of the manuscript is almost identical to what the Jewish tradition set in writing, thus eliminating any doubt that up to the earliest Masoretic manuscript (ninth century AD) anyone could have intervened on the text. This is indisputable proof that the text of the book of Isaiah was always in this form, 1QIsa having been written between 350 and 100 BC.

The Birth of Christ

“For unto us a Child is born, unto us a Son is given, and the government will be upon His shoulders. And He will be called Wonderful Counselor, Mighty God, Everlasting Father, Prince of Peace. Of the increase of His government and peace there will be no end. He will reign on the throne of David and over his kingdom, to establish and sustain it with justice and righteousness from that time and forevermore. The zeal of the Lord of Hosts will accomplish this” (Isaiah 9.5–6).

This is a remarkable text of the prophet, which speaks of Messiah’s birth. In fact, Chapters 7–11 are a messianic section, and many other messianic verses can be found in them. The fact that this text was interpreted by the ancient rabbis as referring to the Messiah is clear from numerous testimonies. Thus, the Targum Jonathan—which is the explanation in Aramaic of the writings of the prophets, originally written in Hebrew—mentions in this verse that “The prophet announces to the house of David: A child was born unto us, a Son was given to us who took the Law upon himself to guard it. And his name was called The Great Counselor, Mighty God, The Eternal One: The Messiah, in whose days we shall be filled with peace.” And Rabbi Yose the Galilean (1st-2nd century AD) said, “Also, the name of the Messiah is Peace, as it was said, Eternal Father, Prince of Peace” (Babylonian Talmud, Derech Eretz Zutta). And in the great Midrash in Deuteronomy, it is said, “The rabbis put the following words in the mouth of Patriarch Jacob: I have yet to depict the Messianic King, as it is written: A child has been born unto us” (Midrash Debarim Rabbah).

In the New Testament, the angel’s tidings to the Virgin Mary refer to this very passage from Isaiah: “He will be great and will be called the Son of the Highest; and the Lord God will give Him the throne of His father David. And He will reign over the house of Jacob forever, and of His kingdom there will be no end” (Luke 1.32–33).

The Spirit of God Rests upon the Messiah.

This is a strong idea of the Prophet Isaiah, which appears in several passages: “A branch will come out of the stem of Jesse and a shoot from its roots will give. And the Spirit of God, the spirit of wisdom and understanding, the spirit of counsel and might, the spirit of knowledge and of good faith, shall rest upon him…” (11.1–3); “I have put My Spirit upon Him, He will judge the peoples” (42.1); “The Spirit of the Lord is upon Me, because the Lord hath anointed Me to preach good tidings unto the poor; He hath sent me to heal the brokenhearted…” (61.1) These are the words with which the Savior begins His preaching in the synagogue at Capernaum: “And He was given the book the Prophet Isaiah. And when He had opened the book, He found the place where it was written: ‘The Spirit of the Lord is upon Me, because He hath anointed Me to preach the gospel to the poor; He sent me to heal the brokenhearted’ […] And He began to say unto them: ‘Today this scripture is fulfilled in your hearing’” (Luke 4.17–21).

Concerning the prophecies related to the Lord’s Appearance, or Theophany, suffice it to say that all the Old Testament readings from the service of sanctifying the Theophany Water are from the Prophet Isaiah (12.3–6; 35.1–10; 55.1–13).

It is no coincidence that the Prophet Isaiah was called the Old Testament Evangelist.

Archbishop Victorin Ursache: A Saint among Us (III)

Where are You, Lord?