The second spiritual evening within the program Exploring Your Faith! took place on December 17, 2020, online, on the YouTube channel of the monastery. The theme of the evening, “These are the words which were written in the Law of Moses and the Prophets and the Psalms concerning Me” (Luke 24.44) had as its central subject the testimony on the Savior Christ, contained in the psalms.

Messiah: The Anointed One

Messiah, Heb. חישׁמ, mashiah, derived from the verb חשַמָ, mashah, to anoint, means “the anointed.” In Greek the Messiah (the Anointed One) translates as Christ. Thus, the translation of the name Jesus Christ is the Anointed Savior.

In the Old Testament, anointing was the act by which priests, kings, and prophets were consecrated. Thus, they became God’s representatives, sent by Him. The Messiah becomes an established term in the prophetic biblical literature (Daniel 9.25–26) and post-biblical as a title for a future Person, a person in whom were concentrated all the expectations of a world reminiscent of Paradise (cf. Isaiah 11.1–10). The Messiah becomes the focal point of rabbinic exegesis and the explanation of the Law in the Synagogue. Texts that have not been exploited as messianic in Christian exegesis are often interpreted as such in Judaism. One such example is Ruth 2.14: “Come here and eat of the bread, and dip your piece of bread in the vinegar.” The Midrash—an old rabbinic commentary on the Old Testament—by exposing a tradition based on the personality of Rabbi Jonathan (135–170 AD), considers the text a powerfully messianic one, the bread being the bread of Messiah’s kingdom, which will rain manna from heaven on his people and the vinegar refers to the sufferings of the Messiah, for it is written: “He was wounded because of our lawlessness” (Isaiah 53.5).

The Messiah is the son of David because God swears to David that He will always put a descendant of his on the throne (Psalm 131.11: “The Lord swore to David this truth, and He shall not reject it: ‘I shall set upon your throne one from the fruit of your loins.’”). The connection between the figure of the Messiah and that of David lies in the fact that David, through the Psalms, is the one who outlines for the first time, more clearly, the image of the Messiah.

Verses 7–8 of Psalm 2, “The Lord said to Me, ‘You are My Son, today I have begotten You. Ask of Me, and I will give You the nations for Your inheritance and the ends of the earth for your possession” were interpreted by rabbis to be about the Messiah, the son of David, who will soon arrive in our time (Babylonian Talmud, Sukkah 52a).

“The Lord [הוָהיְ ‘Yahweh’] said to my Lord [ינדֹ אלַ ‘la´dönî’; ‘adön’-Lord]: ‘Sit at My right hand, until I make Your enemies the footstool of Your feet.’ The Lord shall send forth the rod of Your power from Zion, and rule in the midst of Your enemies. With You is the beginning in the day of Your power, in the brightness of Your saints; ‘I have begotten You from the womb before the morning star.’ The Lord swore and will not repent, ‘You are a priest forever according to the order of Melchizedek’” (1–4). 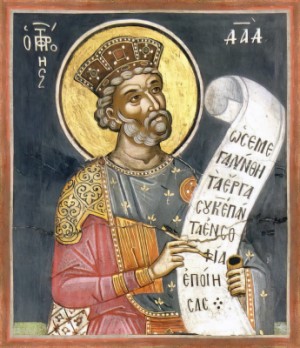 This is the classic case of a psalm interpreted messianically in ancient Judaism and is no longer interpreted as such beginning with Rashi (Rabbi Solomon ben Isaac, 1041–1105 AD). But when the Talmud speaks of Zechariah 4.14 (“These are the two sons of richness who stand beside the Lord of all the earth”), it refers to this Psalm saying, These are Aaron and the Messiah, and I do not know which one to prefer. When it is written: “The Lord swore and will not repent, ‘You are a priest forever according to the order of Melchizedek’” (Psalm 109, 3–4), we know that this refers to King Messiah rather than to the priest of justice (Babylonian Talmud, Avoth, 34, Rabbi Nathan, 2nd century AD).

It is a psalm that tells us a lot about the Messiah: “Sit at My right hand,” “I have begotten You from the womb before the morning star,” “You are a priest forever according to the order of Melchizedek.” It is clear that the Messiah was not to be a mere man. This is also reflected by the Savior when He asks the Pharisees:

What do you think about Christ [the Messiah]? Whose Son is He? They said to him, “The Son of David.” And He said to them, “How then does David in the spirit call him ‘Lord,’ saying, ‘The LORD said to my Lord; Sit at My right hand, till I make Your enemies your footstool?’ If David then calls him ‘Lord,’ how is He his son?” And no one was able to answer Him a word, nor from that day on did anyone dare question Him anymore (Matthew 22, 41–46).

Among the psalms of the passions, Psalm 21 is the one that testifies to these, par excellence. The first verse “God, my God, hear me; why have You forsaken me?” represents the very words spoken by the Savior on the cross before He gave His Spirit. Or: “All who see me mock me; they speak with their lips and shake their head, saying, ‘He hoped in the Lord, let Him rescue him; let Him save him since He delights in him” (8–9), also accentuated by the Gospel of Matthew (27.39–43): “And those who passed by blasphemed Him, wagging their heads. (…) He trusted in God; let Him deliver Him now if He will have Him; for He said, ‘I am the Son of God.’” We see how from these psalms a portrait of the Messiah is drawn, both of glory (superhuman) and of self-emptying, of suffering. These two, glory and passion, appear together in almost all the prophetic writings concerning the Messiah who was to come and were fulfilled in the person of the Savior Christ.

Thoughts on the Dignity of Being Romanian

Archbishop Victorin Ursache: A Saint among Us (II)