The debts he owed to the monastery because of the publication of Holy Places forced him in the position of agreeing to serve “temporarily” at St. Peter and Paul Church in Moundsville, West Virginia, beginning in December 1960. This period lasted until September 1962, when he returned to the monastery of St. Tikhon.

Throughout this period, he continued to aid financially Metropolitan Visarion Puiu and the Romanian monastics from the Holy Places, being a vital help for them.

As for illness, he generally kept quiet so as not to worry Metropolitan Visarion. He was constantly suffering from rheumatism and could not travel by plane because his health did not allow it. In the summer of 1963, he was hospitalized and was released against medical advice for “it seemed wrong to me that the medical treatment to which I was subjected weakened me as I could barely get up,” he wrote to the metropolitan. 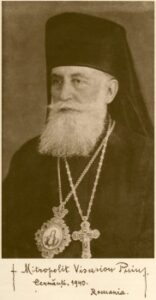 As for poverty and deprivation, these were also a consequence of the fact that he did not agree to compromise his conscience in exchange for material help. But he suffered that he could not help as much as he wanted. On August 29, 1961, he wrote to Metropolitan Visarion Puiu: “Well, wherever I may have been during this life truly lived according to the monastic vow of poverty, I have never felt any material wants, and I have not expected or expect any salary or help from the Romanian Church authorities in the country or abroad. […] Personally, if I had five dollars, or fifty, or five hundred, […] I would direct that sum to the needs and wants of others. Even the small donations that I sometimes receive from some Romanians here together with prayer lists, I send for our projected church hearth for the Romanian monks in Jerusalem.” In fact, Archbishop Victorin is one of the founders of the Romanian Settlement in Jericho.

Loneliness was his companion from the first months in America. In this regard, he was not far from the loneliness of the Jordan, but at one point he confessed that “life is much easier in the loneliness of a desert than in the loneliness amid the world.” He felt the apogee of alienation in Moundsville: “In Jerusalem we were fewer Romanians, but we spoke more Romanian. Yet here I check myself from time to time to make sure I don’t forget my tongue. I am entirely among foreigners with a different language and customs. I have never felt as alienated as I do now” (May 25, 1961).

All these difficulties, troubles, obstacles, and shortcomings were occasions for reflection and strengthening in hope and faith: “In this world God gave us life not to ask that our will be done but to fulfill and to submit to God’s will” (1959); “The Passion Week of our Lord is sometimes given to us, and we spend it in pain and suffering. But the Resurrection of the Lord always fills our souls with the most undisputable hope” (1960); “These words [‘Christ is risen!’] can also strengthen our belief that even the great week of passions, for which there is no calendar, will end with the resurrection to the joy of all fulfilled hopes” (April 2, 1961).

He returned to the monastery of St. Tikhon in September 1962, and due to lack of staff he was co-opted as a teacher at the monastery’s seminary, teaching dogmatics, morals, and Greek. The resumption of teaching after almost 20 years of interruption was not at all easy for him, especially since he had to teach in a foreign language. Suddenly he found himself unable to find “even a few minutes for a letter.” The remuneration was not great either. But despite all, the fact that he could stay in a monastery was the most important thing.

We find a fragment of his life at the monastery in a letter sent to his uncle, Calistru Bighescu, on March 22, 1966: “Here also, no matter how industrialized life is, I am the same as I was at home. I live in a monastery and from early in the morning, sometimes around 5 o’clock, and until late in the evening, 11 o’clock at night, always busy with our monastic duties, time passes very quickly […]. All we have around the monastery are fields, lakes, and forests. In winter, we are covered with snowbanks, and in summer isolated by the flooding of lakes.”

It is worth mentioning the relationship he had with Jerome L. Newville. Beginning with 1963, they were part of the Seminary faculty together. Deeply impressed by Archimandrite Victorin’s personality and erudition, Jerome asked him to be his spiritual adviser. On his counsel, Jerome visited Romania in 1965, with a special stop at Neamţ Monastery, precisely to get in touch with the spirituality that shaped Archimandrite Victorin. The spiritual bond between the two lasted for the rest of their lives. To (Archimandrite) Jerome, Father Victorin was “a modern ascetic akin to the Desert Fathers of ancient Egypt,” with an extraordinary influence on his life.

His program at St. Tikhon’s Monastery was as follows: from Tuesday to Friday, he taught at the Seminary, and from Friday afternoon to Monday (and on all feast days), he went as a missionary priest to various Orthodox communities to serve the Liturgy (on Sundays) and do catechesis.

After the death of Bishop Andrei (March 14, 1963), the leadership of the Romanian Orthodox Missionary Episcopate in the USA and Canada (Romanian acronym EMORA) changed their attitude toward him, seen in the fact that Archimandrite Victorin began to substitute in the vacant Romanian parishes. Thus, in 1963–1964, he served at St. Nicholas Parish in Worcester, Massachusetts, and in 1965 at the Annunciation Parish in Cleveland, Ohio. At the latter he met Archdeacon Bartolomeu Anania in late 1965, an encounter that proved to be providential for EMORA. After living for such a long time among foreigners, any opportunity to serve the Romanian believers was a blessing to him, and he was willing now to accept any kind of appointment within EMORA.

Archimandrite Victorin ministered the Romanian community body and soul, with a sacrificial spirit and energy that did not take into account his many “infirmities” as they emerge from the correspondence with Metropolitan Visarion. From thereon it can be said that we had another man—namely, one of the greatest missionaries of the Romanian Orthodox Church: “Father Victorin Ursache is a very gentle and spiritual man who fasts and has a sacrificial disposition. Regrettably, he was not sufficiently supported but used only as a fill-in, a substitute in vacant parishes. The Reverend Father went everywhere, traveling tremendous distances every week, paid or unpaid, serving, preaching, catechizing. He never asks for anything and is ever ready to respond to any solicitation, proving that he is in the service of our communities,” wrote Archdeacon Bartolomeu to Patriarch Justinian Marina in January 1966.

After difficult years, Archimandrite Victorin learned to do Orthodox mission in America: “The priestly life here is indescribably difficult—a true missionary sacrifice in the fullest sense of the word. With a strong will and the help of Divine Grace, spiritual contentment and joy in Christ can also be obtained here,” he would later write to Father Ștefan Slevoacă.

Signs of Mourning in the Jordan Valley