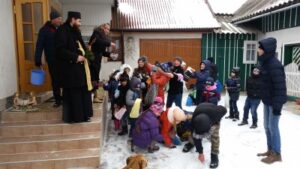 The northern border of Romania divides families and people belonging to the same Romanian nation. It is the same type of border that separates the Romanians on both sides of the Prut River. The historical context was not always favorable to them, but in the heart of every Romanian in these lands there was and still is a power that kept and keeps them united: love springing from faith.

In northern Bukovina, in the Cernăuți region, live about 200,000 Romanians. Many of them come regularly to Romania to learn their history, values, ancestry. In turn, they are visited by their brothers on various occasions. One of these is the Feast of the Lord’s Baptism, which they celebrate according to the Old Calendar, on January 19th. Starting in the mid-1990s, at the invitations of parish priests and believers from the villages of Crasna, Ciudei, Pătrăuți located near the border, fathers of Putna Monastery have been blessing homes there with Theophany Water. 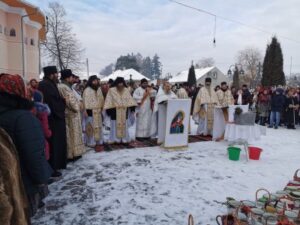 Thus, two days before the Feast of Theophany, the fathers travel to the little town of Crasna, which is perhaps the hearth of the strongest and most united community of Romanians in the Cernăuți region. Once arrived at the main church, they are greeted by the parish priest, Vasile Paulenco and his co-ministering priest Nicolae Ursachi, together with several faithful. They read the Akathist Hymn of the Wonderworking Icon of the Mother of God from Crasna. After that, each father is taken to the Christian family that will host him, where they converse about present and bygone times, about life in God and in the Church. The next day, before dawn on the eve of the Epiphany, they all meet at the assigned churches to perform the Great Blessing of Waters together with the parish priests. Soon thereafter, around 7 a.m., each father starts to bless the Christian houses and families from a certain section of the village. They are accompanied by a guide who knows well all the streets, alleys, and shortcuts. Along the way, they are joined by groups of children of all ages, from preschoolers to high school students. Such crowds of children reach up to 40 members. They go ahead and announce the arrival of the priest, shouting choruses of “Kiralesa,” an adaptation of the Greek formula “Kirie, eleison” (Lord, have mercy). People await them with open doors, the sign of eager expectancy; lit candles, the symbol of inner joy and faith burning in the heart; and a table full of food, as thanks for the past year and for the newly begun one, that it may also be blessed and fruitful. In each house, the fathers sing the troparion of the Feast and sprinkle the people present, the table of food, the house, and the whole household. At the end, the host offers the children wrapped sweets, most of the time throwing them up in the air to the joy of the children, who try to catch as many as possible. There is also a short repast as the roaming day is long and difficult. Often, to shorten the trip, it is necessary to walk straight through gardens or pastures, whether on dry land or through snow and mud. But all efforts are amply compensated by the joy flooding the people’s faces and words. At the end of the day, each father returns to his host, continuing the discussions of the previous evening and preparing for the next day’s liturgy. 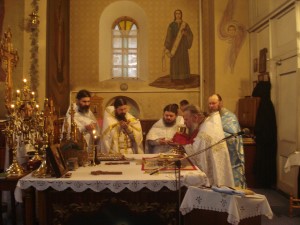 The Great Feast of Theophany gathers many Christians in their parish churches. The priests and deacons of Putna Monastery celebrate together with the Romanian priests from the villages in northern Bukovina—another sign that the unity of a nation has been and is maintained by faith, the most important link between people. At the end of the Holy Liturgy, according to the rite, the Great Blessing of Waters is performed outside, as on the previous day. The faithful put forth their traditional earthen pots or other vessels, in which they may also place a sprig of basil. Theophany Water is taken home by everyone, and all people drink from it for the next eight days, until the Leavetaking of the Feast, and then whenever they receive the blessing from their spiritual father to do so or are in a state of serious illness.

Before parting, the ministering priests thank one another and the faithful for making possible such a meeting that unites them, strengthens them, and fills their hearts with joy, love, and hope for a reunion in the following year. For “what is so good or so pleasant as for brothers to dwell in unity!” (Psalm 132.1).

Until the Bell Rings

The Baptism of the Lord