St. Sophronius of Jerusalem was born around the year 560 A.D in Damascus, from God-loving parents named Plintos and Mira. From his youth, St. Sophronius was inclined towards the spiritual life, making himself worthy through good deeds of his name, which translates to “the wise one”. 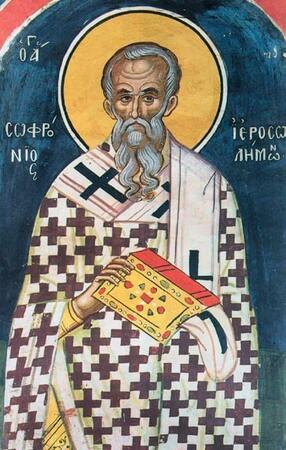 Later, he busied himself with learning philosophy. Wishing, however, to get even closer to the Source of Life, he would seek out the spiritually advanced fathers of monasteries and deserts. Arriving in the city of Jerusalem, he entered the brotherhood of St. Theodosius and became a dear friend of St. John Moschus. Together with his friend, he traveled to Palestine, and then later, to the regions near Antioch and Alexandria, where he wrote accounts about people whose lives exuded a beautiful fragrance, which he added to the “Spiritual Meadow.”

In Alexandria, he was tonsured a monk and became acquainted with St. John the Merciful, the patriarch of Alexandria. Both St. Sophronius and St. John Moschus became very close to the patriarch, helping him in his responsibilities of comforting the people and fighting against heresies. St. Sophronius also wrote about the lives of Saints Cyrus and John, who had helped him when he had fallen gravely ill. Around the year 616, he was forced to leave Alexandria due to the barbarian takeover, so together with St. John Moschus, he directed steps towards Rome. After the latter’s death, he returned to St. Theodosius’s monastery, where, respecting St. John’s final wishes, St. Sophronius arranged for his friend’s body to be buried according to the monastic ordinances.

He remained in Jerusalem where, in the year 634, he was chosen patriarch. He strongly opposed the heresy of the Monothelites, joining forces with St. Maximus the Confessor. St. Sophronius assembled a synod, he anathematized the Monothelite heresy, and sent epistles confirming the true faith everywhere. Later, these epistles were read at the 6th ecumenical synod and were considered normative orthodox writings. Being a lover of the Lives of the Saints, he continued to record them. Among them is the life of St. Mary of Egypt and St. John the Merciful. In addition to these works, St. Sophronius also wrote other works useful for the life of the Church. Afterwards, the city of Jerusalem was attacked by Caliph Omar for two years, during which the holy patriarch remained in the city, guiding and encouraging the people. After these two years, St. Sophronius decided to open the gates to the city, but only after he made settled an agreement with Omar that the true faith and the Holy Church should not suffer any consequences. The understanding was not respected by the caliph. Profoundly saddened by the suffering of the people, St. Sophronius fell asleep in the Lord on March 11, 638.

In conclusion, we would like to include a description that St. Maximus the Confessor writes about St. Sophronius in a letter to an Eastern official: “Over there, you have my blessed master, father and most especially teacher, kir avva Sophronius, truly ‘of sound mind’ (Gr. σώφρων) and wise (Gr. σοφόν), protector of the truth, undefeated defender of the divine dogmas, and steadfast in his fight with actions and words against any heresy.”

The Mechanism of the Fall