Saint Basil the Great, commemorated on the first day of the year, was born around the year 330 AD in Pontus, Cappadocia, to pious parents. His parents were named Basil and Emilia, who besides Saint Basil, also had four other children who were eventually canonized as saints. One of these was Saint Gregory of Nyssa. 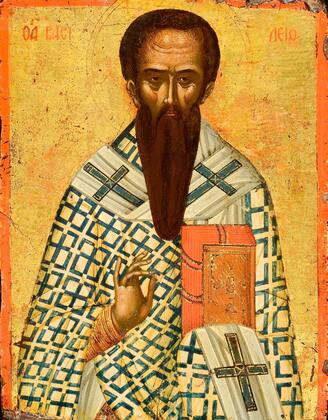 Being gifted by God with an enlightened mind, he studied in the best schools of his time, surpassing all those in his generation. He practiced rhetoric for some time, but at the insistence of his sister Macrina, he was baptized a Christian, divided his wealth among the poor, and dedicated his life to God. He traveled through Egypt, Palestine, Syria, and Mesopotamia, seeking out the hermits in these lands, and then he returned to Pontus, where he lived an ascetic life for five years along the banks of the Iris River. During this period, the Saint concerned himself with the organization of monastic life and composed important works on this topic.

Later, he was named bishop of Caesarea in Cappadocia. He served in a very difficult period for the Church, which was persecuted for many decades by the Arians; the battle for maintaining the true faith was one of Saint Basil’s main concerns. He suffered greatly, both directly – especially due to the Arian leadership of the Empire – and indirectly, upon seeing how the Arians were sowing disorder and heresy throughout the Church. He fought endlessly, through letters and treatises, to reestablish the true faith and to strengthen the bishops and faithful who were persecuted by the Arians. Likewise, being a good administrator, he maintained a vast philanthropic activity, which has remained as a model in human history.

He composed countless writings, among which are included his Epistles, which he wrote between the years 357-378 and of which over 300 have been preserved. These letters reveal as clearly as possible the soul of Saint Basil the Great. Although the general perception about Saint Basil is that he was a great ascetic (as indeed he was), harsh on himself and demanding with those who wanted to follow Christ, in his Epistles we discover that he was also as human as can possibly be. Here, we have access to the complexity and depth of his soul, to his humility, to his wisdom, to his diplomacy, to his care for the life of the Church, to his weakness in the wake of illness, etc.

We have chosen three epistles that exhibit these characteristics mentioned above.

There is a well-known episode in his life in which he responds with dignity to the high authorities sent to force him to embrace the Arian faith. Behold how Saint Basil relates the events, in Epistle 79 from the year 371, to Eustatius of Sevaste: “I have hitherto sustained some attacks from high magistrates, and these no light ones; while both the prefect [Modestus] and the high chamberlain [Demosthenes] pleaded with sympathy for my opponents. But, so far, I have sustained every assault unmoved, by that mercy of God which supplies to me the aid of the Spirit, and strengthens my weakness through Him.”

In Epistle 140, to the faithful of Antioch who were being persecuted by the Arians and who had been separated from their pastor, Saint Meletius, for many years, he wrote:

“‘Oh that I had wings like a dove for then would I fly away’ (cf. Psalms 54, 76) to you, and satisfy my longing to meet you. But now it is not only wings that I want, but a whole body, for mine has suffered from long sickness, and now is quite worn away with continuous affliction. For no one can be so hard of heart, so wholly destitute of sympathy and kindness, as to hear the sigh that strikes my ear from every quarter, as though from some sad choir chanting a symphony of lamentation, without being grieved at heart, being bent to the ground, and wasting away with these irremediable troubles. But the holy God is able to provide a remedy for the irremediable, and to grant you respite from your long toils. I should like you to feel this comfort and, rejoicing in the hope of consolation, to submit to the present pain of your afflictions. Are we paying the penalty of our sins? Then our plagues are such as to save us for the future from the wrath of God. Are we called upon through these temptations to fight for the truth? Then the righteous Giver of the prizes will not suffer us to be tried above that which we are able to bear, but, in return for our previous struggles, will give us the crown of patience and of hope in Him. Let us, therefore, not flinch from fighting a good fight on behalf of the truth, nor, in despair, fling away the labours we have already achieved. For the strength of the soul is not shown by one brave deed, nor yet by effort only for a short time; but He Who tests our hearts wishes us to win crowns of righteousness after long and protracted trial.

“Only let our spirit be kept unbroken, the firmness of our faith in Christ be maintained unshaken, and ere long our Champion will appear. As the Apostle says, ‘He will come and will not tarry’ (Hebrews 10.37). Or as it says in the Old Testament, ‘Expect tribulation after tribulation, hope upon hope; yet a little while; yet a little while’ (Isaiah 28.10). Thus the Holy Spirit knows how to comfort His nurslings by a promise of the future.”

Finally, behold what the Saint wrote to Urbicius the monk in Epistle 123, from the year 373:

“You were to have come to see me (and the blessing was drawing near) to ‘cool me, aflame in my temptations, with the tip of your finger’ (cf. Luke 16.24). What then? My sins stood in the way and hindered your start, so that I am sick without a remedy. Just as when the waves are round us, one sinks and another rises, and another looms black and dreadful, so of my troubles: some have ceased, some are with me, some are before me…

“Yet come to me, to console, to advise, or even to travel with me; in any case you will make me better for the mere sight of you. Above all, pray, and pray again, that my reason be not whelmed by the waves of my troubles; pray that all through I may keep a heart pleasing to God, that I be not numbered with the wicked servants, who thank a master when he gives them good, and refuse to submit when he chastises them by adversity; but let me reap benefit from my very trials, trusting most in God when I need Him most.”

I Have Nothing against You, Death

“Sealed Vessel of the Holy Spirit”