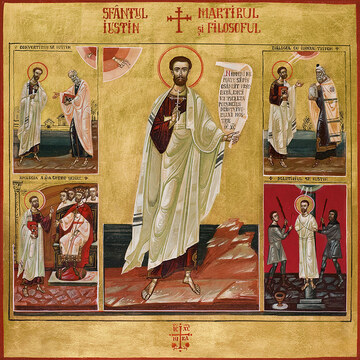 “Justin the Philosopher, holy man and friend of God,” as Epiphanius of Salamis describes him in the fourth century, was born in Syria in Palestine at the end of the first century. He inherited the pagan faith from his parents. From a young age, he showed himself to be intelligent and with a deep love for learning. Seeking to find out who God is, he searched for famous philosophers to help him. He went to the disciples of Pythagoras and of Plato, but there was no one who could explain God to him. But walking one day close to the sea, he encountered an old man, with whom he started talking about philosophy, and after, about God. The old man told him about the Holy Prophets, encouraged him to read their writings and to pray to God from his heart for his path to be revealed. The old man left, and Saint Justin never saw him again. Saint Justin followed the recommendations of the old man, he became closer and closer to the Christian faith and to the life of the early Christians, who were dying while confessing Christ, and ultimately he got baptized.

Afterwards, Saint Justin went to Rome. There, after three righteous men were killed for Christ, the Saint wrote two Apologies, in which he describes the Christian teaching and the life of Christians, and he proves the lack of basis for the accusations against them. This writing is shared through the whole castle, and gets in the hands of the Roman king, who demands a stop to the killing of Christians and to the stealing of their wealth.

The Saint died as a martyr in Rome around the year 165. He is commemorated by the Church on June 1. He enriched the life of the Church through his prayers and writings.

He partook in a martyr’s death, which he so admired in the Christian martyrs before him. He described in his second Apology the way Christians were dying, trying to challenge all the slander against them: “For I myself, too, when I was delighting in the doctrines of Plato, and heard the Christians slandered, and saw them fearless of death, and of all other things which are counted fearful, perceived that it was impossible that they could be living in wickedness and pleasure. For what sensual or intemperate man, or who that counts it good to feast on human flesh, could welcome death that he might be deprived of his enjoyments, and would not rather continue always the present life, and attempt to escape the observation of the rulers; and much less would he renounce himself when the consequence would be death?”

Below we will share some of the writings from his first Apology, which describes Christian practices.

“I will also relate the manner in which we dedicated ourselves to God when we had been made new through Christ; lest, if we omit this, we seem to be unfair in the explanation we are making. As many as are persuaded and believe that what we teach and say is true, and undertake to be able to live accordingly, are instructed to pray and to entreat God with fasting, for the remission of their sins that are past, we praying and fasting with them. Then they are brought by us where there is water, and are regenerated in the same manner in which we were ourselves regenerated. For, in the name of God, the Father and Lord of the universe, and of our Savior Jesus Christ, and of the Holy Spirit, they then receive the washing with water… And this washing is called illumination, because they who learn these things are illuminated in their understandings.”

“But we, after we have thus washed him who has been convinced and has assented to our teaching, bring him to the place where those who are called brethren are assembled, in order that we may offer hearty prayers in common for ourselves and for the baptized [illuminated] person, and for all others in every place, that we may be counted worthy, now that we have learned the truth, by our works also to be found good citizens and keepers of the commandments, so that we may be saved with an everlasting salvation. Having ended the prayers, we salute one another with a kiss.”

“There is then brought to the president of the brethren bread and a cup of wine mixed with water; and he taking them, gives praise and glory to the Father of the universe, through the name of the Son and of the Holy Ghost, and offers thanks at considerable length for our being counted worthy to receive these things at His hands. And when he has concluded the prayers and thanksgivings, all the people present express their assent by saying Amen. This word “Amen” answers in the Hebrew language to ‘so be it’. And when the president has given thanks, and all the people have expressed their assent, those who are called by us deacons give to each of those present to partake of the bread and wine mixed with water over which the thanksgiving was pronounced, and to those who are absent they carry away a portion.”

“And this food is called among us the Eucharist, of which no one is allowed to partake but the man who believes that the things which we teach are true, and who has been washed with the washing that is for the remission of sins, and unto regeneration, and who is so living as Christ has enjoined. For not as common bread and common drink do we receive these; but in like manner as Jesus Christ our Savior, having been made flesh by the Word of God, had both flesh and blood for our salvation, so likewise have we been taught that the food which is blessed by the prayer of His word, and from which our blood and flesh by transmutation are nourished, is the flesh and blood of that Jesus who was made flesh. For the apostles, in the memoirs composed by them, which are called Gospels, have thus delivered unto us what was enjoined upon them; that Jesus took bread, and when He had given thanks, said, ‘This do ye in remembrance of Me, this is My body;’ and that, after the same manner, having taken the cup and given thanks, He said, ‘This is My blood;’ and gave it to them alone.”

“And on the day called Sunday, all who live in cities or in the country gather together to one place, and the memoirs of the apostles or the writings of the prophets are read, as long as time permits; then, when the reader has ceased, the president verbally instructs, and exhorts to the imitation of these good things. Then we all rise together and pray, and, as we before said, when our prayer is ended, bread and wine and water are brought, and the president in like manner offers prayers and thanksgivings, according to his ability, and the people assent, saying Amen; and there is a distribution to each, and a participation of that over which thanks have been given, and to those who are absent a portion is sent by the deacons.”

True joy is shared with others

The Descent of the Holy Spirit