We reached the bright Feast of the Nativity of our Lord. Thanks be to God that we are together, for this is how joy and grace multiply. In fact, it is better that we are with God, or that God is with us. This is the word we must have before our eyes these days: Immanuel, God with us. A Hebrew word, with which the Prophet Isaiah announced the Messiah 700 years before: “Behold, the virgin shall conceive and bear a Son, and you shall call his name Immanuel” (which means “God with us”) (Isaiah 7.14). 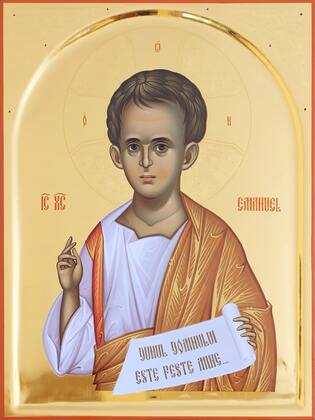 I think we should meditate more on this truth these days. Let us stick to this truth. There are many realities around seeking to impose themselves onto us. And many times, we are overwhelmed. Beginning with our sins, our infirmities, all our shortcomings, we often feel fed up with ourselves. Then [there are] the relationships with the people around, which may be difficult and lead us to the end of our patience. Then there are the surrounding realities, which are not easy. So many realities come in contact with us and try to encroach upon our hearts and minds to capture our attention.

Well, we must keep in mind the reality that God is with us. This is stronger than anything if we know how to hold on to it. It depends on us. Because today is the Sunday after Christmas, we read the gospel about the flight to Egypt. Right after the magi’s worship, the angel appeared to Joseph in a dream and told him to take the Baby and His mother, flee to Egypt, and stay there until he told them. Where was God?! How is it that God incarnate had to flee to Egypt?! And yet it was so. The Son of the Father, the incarnate Word, had to flee to Egypt.

It is the same with us. It is good to get used to this language of God, of the gospel. For the Savior says, “The kingdom of heaven is like a mustard seed, which is the least of all the seeds, but when it is grown, it is greater than the herbs and becomes a tree” (Matthew 13.31–32). When we talk about God, we start with small realities. He is present, but He is like a seed of mustard in us. As He was when He was born. The world did not know the Messiah had been born. He was ignored. Well, apart from the shepherds, the magi … The reality of the world went on fine and dandy, thank you very much. And God had incarnated!

So it is in our lives. God is with us, only the old man is still strong in us, the enemy is still very strong, or other realities are strong in/for us. We are all overwhelmed by something. Let us also remember the episode of walking on water. God was with the apostles, the Messiah had appeared to them, and yet there were waves on the sea. And He let them row all night on the raging sea. So do we need to get used to the fact that God’s presence with us does not necessarily mean tranquil waters. It can mean waves and storms. But if we know not to take our eyes off Him and stick to this reality—God with us!—as the most important one of our lives, then we will overcome as St Peter did.

I remember the words of a confessor, Fr Mihai Lungeanu, who became a priest later in his life, after the Revolution [of 1989]. He suffered in the communist prisons. A young priest interviewed him, and he kept marveling at what Fr Mihai was saying to him. Father Mihai spoke in natural terms about spiritual realities, almost unthinkable to us. Among other things, he talked about how he had acquired the prayer of the heart. Fr Mihai was imprisoned twice. After the first release, he acquired the gift of grace at once, upon communing of the Eucharist. He said he felt a pain in his heart—an unnatural, pleasant pain of grace. And what is the gift of the prayer of the heart?! The heart that prays constantly. “I sleep, but my heart keep watch,” says Solomon (Song of Songs 5.2). It is a special grace. It is a constant presence of God, or of the human heart at His feet. At such words, the young father asked him if all temptations went away. Father Michael replied, “No, the temptations were not gone.” And the other asked, “Well, what good was it if the temptations didn’t go away?” The answer, “The temptations do not go away, but you go through them differently, you are strengthened.” He also said that when he was imprisoned the second time and already had the prayer of the heart, he felt… heavy-duty. Through the gift of prayer and especially the presence of God, one is able to spit at the enemy.

Let us do this; let us stick to this reality: Immanuel. Live thus our lives. My unbelief, my helplessness, my sins, my abominations; those of the people around me; and those of the world at large, I must live them through this reality: God with us.

This reality, that God is with us, relates us differently to the world. The enemy can do whatever he wants, but the man who lives in God is different. God is everywhere. And He works. We don’t know how, but this is the reality, even if we don’t understand it. God’s ways are hard to understand. But if we know He is with us, we relate differently to everything that happens. And we know that with Him we will overcome. As Fr Arsenie Papacioc used to say. It was the 2004 election, and I asked him, “Father, what is going to happen?” And he answered me, “We do not know what is going to be, but we know that in the end Christ will overcome. But this victory depends on you and on me!” Therefore, let us believe that God is with us, that He works, and that He will overcome. And let’s stick to that! But let us also get involved. As for the rest… we ought to rest assured for He is with us.

May God help us and give us this joy of the holiday in our hearts all year long.

Pastoral Letter for the Feast of the Lord’s Nativity 2021