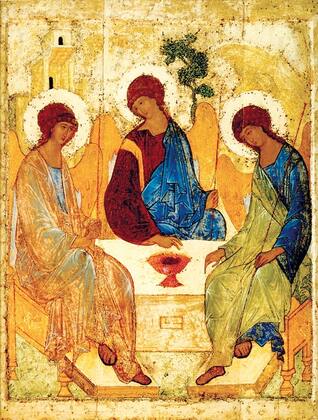 The third spiritual evening of the series entitled “Jesus Christ: God-Man in the Orthodox Teaching” took place on Thursday, November 18, as usual, on the YouTube channel of the monastery. The theme of the evening was the Holy Trinity.

The Savior is the One who revealed the Holy Trinity to us: “No one has seen God at any time. The only begotten Son, who is in the bosom of the Father, He has declared Him” (John 1.18).

In the parting speech, the Savior prays to God the Father: “That they all may be one, as You, Father, are in Me, and I in You; that they also may be one in Us, that the world may believe that You sent Me. …  I in them and You in Me; that they may be made perfect in one, and that the world may know that You have sent Me, and have loved them as you have loved Me” (John 17, 21–23). This text shows the perfect interpenetration (perichoresis) of the Persons of the Holy Trinity. But at the same time, it shows that we also are called to it.

Father Dumitru Stăniloae says: “Each Person is intentionally open to the Others and is directed toward Them in a total and infinite love, and does not hold anything for Himself but is handed over entirely to the Others. It is a total and infinite spiritual interpenetration of conscious love. Divine hypostases embrace and show one another, bearing inseparably the same infinite whole being.” “With God it is not possible for one Self to be asserted over the other Self, but to continually consider the Other as His substitute. Each sees Himself only in relation to the Other, or looks to the Other, or sees Himself in the Other.”

This intra-Trinitarian dynamic of emphasizing the Other, and not the Self, is evident from the very way the Persons of the Holy Trinity revealed Themselves in the Holy Gospel. At the Baptism of the Lord, the Father bore witness to the Son (cf. Matthew 3.17). When He came into the world, the Son did not speak from Himself, but only what the Father gave Him to speak (cf. John 12.49, John 7.16, etc.). Likewise, the Holy Spirit says nothing about Himself, but constantly testifies of Christ, rejoicing to remind us of all the Lord has said (cf. John 14.26, John 15.26).

All humanity bears the image of the Holy Trinity, whose nature is communion, according to St Basil the Great. Says Father Stăniloae: “Every human hypostasis is ontologically related to the others, and this is manifested in their need to be in a relationship; the human one-beingness consists of a single being borne by all the hypostases in solidarity; only in interpersonal communion can man be discovered as the image of the triune communion and as participation in it.” We are also asked to manifest ourselves in relation to others according to the model of the dynamics of the Holy Trinity: of affirmation of the other, of devotion to the other, of sacrifice for the other, of respect for the mystery of the other as a person created in the image of God. This is another way of life—it is the evangelical way. This was brought to us by Christ.

Saint Porphyry the Kapsokalivite says: “We are all one because God is our Father, and He is everywhere. When we live this, we are within the Church. This is what the Lord asks in His hierarchical prayer, that all the members of the Church may be one. Well, this can only be understood by grace. We live the joy of unity, of love. And we become one with everyone else. There is nothing more beautiful! The key thing is to enter the Church. Let us unite with our fellow men, with the joys and sorrows of all. Let us feel what the others feel, let us pray for all, let us grieve for their salvation, let us forget ourselves. Let us do everything for them, as Christ does for us. Within the Church we become one with each wretched and afflicted and sinner. No one should want to save himself alone. It is a mistake for one to pray only for oneself. We must love the others and pray that no one is lost, that all may enter the Church. This is so valuable. It is with this desire that someone from the world ought to leave the world to go to the monastery or the desert. When we separate ourselves, we are not Christians. We are true Christians when we feel deeply that we are members of the mysterious body of Christ, of the Church, in a constant bond of love; when we live united in Christ—that is, when we live in unity within His Church, with the feeling that we are one. It is the greatest depth, the highest meaning held by the Church. Herein lies the mystery: that all unite as one in God. There is no other religion such as this one. No other religion says such things.  They say something, but not in this mystery, this finesse of the mystery asked by Christ, telling us that this is what we should become, that He wants us to be His.”