On the 24th Sunday after Pentecost, we read the gospel about the raising of Jairus’ daughter: “There came a man named Jairus, and he was a ruler of the synagogue. And he fell down at Jesus’ feet and begged Him to come to his house, for he had an only daughter about twelve years of age, and she was dying” (Luke 8.41–42). And so the Savior entered his house. Let us first notice how docile the Savior was. He was asked; He went. He showed His willingness to serve. 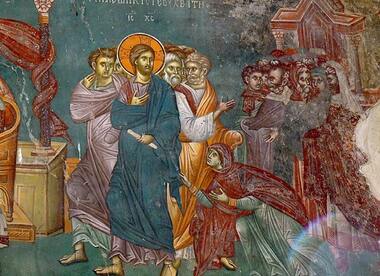 We would like to highlight the right, proper spirit of drawing closer to God. Let us learn it from the woman who was healed. As the Savior headed for Jairus’ house, “a woman, having a flow of blood for twelve years, who had spent all her livelihood on physicians and could not be healed by any, came from behind and touched the border of His garment. And immediately her flow of bold stopped. And Jesus said, ‘Who touched Me?’ When all denied it, Peter and those with him said, ‘Master, the multitudes throng and press You, and You say, ‘Who touched Me?’” (Luke 8.43–45)

It is an interesting image—the crowd pressed the Savior on all sides, yet He asked who had touched Him. No one admitted to doing it, so then, Peter and the apostles answered that in that multitude, all must have touched Him. But He explained, “Somebody touched Me, for I perceived power going out from Me” (Luke 8.46). That was no mere touch. They all touched Him, but only one person touched Him properly because a power went out from Him. The woman was discovered, and she fell trembling at the Savior’s feet. She confessed to all present why she had touched Him and how she was healed immediately.

Well then, how are we to touch God, our Savior, in our prayer or whatever else in order to extract that power out of Him? Apparently, that power emerged without His will. That is how He explained it. Of course, it was His will, but the way the woman drew close touched His heart, and the healing power immediately went out of Him. How do we manage to touch Him as the woman did? How do we get this power out of the Savior?

And to better understand, we must say that this has to do with the language of the heart. The heart cannot love through imposition. One cannot command a heart to love, to help, or to bless. A person must provoke a blessing response in the heart. And I saw this in St Nectarius’ letters to the nuns who were his disciples. He wrote to them to behave in a way that would beget the blessing of his heart. And his was the heart of a saint, a pure heart, not one that would give in to any sort of whims. But the heart of a saint does not love or bless without receiving something from the other.

So let us learn from the woman in today’s gospel some things that provoked this answer in the Savior’s heart. First, we see that she had courage. Now, it can be said that they all had courage, because everyone was pushing Him, so that may not be a big deal. Yet, it meant a lot to her because she was delicate, so her daring was significant. So she mustered up her courage and overcame her diffidence, just as the harlot overcame the shame of sin and drew near the Lord. She had holy audacity. But she also had shyness, and this is where I think we are touching on the most important element: shyness, delicacy. She implicitly felt unworthy. How do we observe her shyness? From the fact that once she was exposed, she was trembling. Of course, she also had faith, for which the Savior praised her. Shyness, faith, and the thought “I’m not worthy.” How do we know it? From her touching the fringe of the Savior’s garment—she did not touch Him directly. So we notice her courage, shyness, faith, and thought of lowliness. All these were in her heart.

How great would it be if we could replicate all these in our hearts and keep them in our prayer? For example, in today’s world, we often have an attitude of entitlement. And perhaps, we often come to church with this attitude and present ourselves before God. A brother from Putna confessed to me that whenever he went to church services early in the morning, at 4.30 a.m., he was tempted to pass judgement on the low attendance of the other monks. But God had mercy on him and gave him a different thought, not to judge others but to thank God for bringing him early to service. “Who am I to stand here before God?” We believe we are somehow entitled to go to church, but in fact we are unworthy to be there before God. Who are we, really?! The tax collector did not enter but stood afar off, by the door and did not dare to look at the altar but beat his breast. This type of shyness, or diffidence, is much more natural and normal when it comes to our relationship with God.

So let us have this shyness in everything related to God. No soul can stand before Him; no one can say he is entitled or has done something to deserve anything from God. There is no such thing. His mercy, or His goodness, which He bestows upon us and with which He kindly caresses us, gives us the audacity to do so. But we need to know our place. As did St Silouan the Athonite, who said, “Lord, if you take me to heaven”—and He took him there—“I will ask You, ‘Let me weep for my sins.’” This is the holy conscience of unworthiness, and it is very important. God loves and heals us. But let us not forget who we are, let us not think we are entitled to anything.

These are perhaps some of the ingredients we need to have in our hearts as we draw closer to God, to provoke His heart’s blessing us and snatch this power from it, as the woman did today.

Pastoral Letter for the Feast of the Lord’s Nativity 2021

The Peace of Christ