At the request and with the blessing of His Eminence Metropolitan Nicolae, we resumed a new series of online spiritual evenings entitled: “Jesus Christ: God-Man in Orthodox Teaching” as part of the Exploring Your Faith educational project. The first meeting took place on YouTube, on September 16, and had the title of “Preamble. About dogma.” It also coincided beautifully with the celebration of Saint Euphemia, by whose miracle the dogma about the two natures (divine and human) in the person of the Savior was established at the Fourth Ecumenical Council in Chalcedon.

Because the new series of spiritual evenings aims to capture the mystery of the Savior Jesus Christ as much as possible, tackling the subject of “dogma” seems natural. Drawing near to God and holy things presupposes a baring of the feet, an undressing, a renunciation of the created covering of our intelligence. We need a proper, respectful approach to the mystery. So the discussion of dogma becomes preparatory to the talk about the mystery. Dogma is also the Church’s formula for containing the uncontained.

For believers, dogma is a truth of faith revealed by God (which cannot be reached through human intellectual constructions), contained in the Holy Scriptures essentially, formulated by the Holy Fathers, unchanging, preached and freely received by its members for salvation. So it is an absolute truth and it has an unchanging character.

The essence of dogma is paradoxical, and it goes beyond logic precisely because it expresses the mysterious. The greatest dogmas of our faith are the following: the dogma of the Holy Trinity, in which we have three Persons, the Father, the Son, and the Holy Spirit in one divine nature; and the dogma of the incarnate Son of God, of God-Man, in whom we have one Person, the Logos, and two natures, one divine and one human taken from the Virgin Mary. Something uncontainable, incomprehensible. But to arrive at these synthetic formulations that refer to the indescribable mystery and which we receive by faith, the Holy Fathers contributed extraordinarily through an intellectual and spiritual struggle.

If in secular culture the term “dogma” has acquired, especially nowadays, a pejorative, limiting meaning, we wanted to highlight the nobility of the dogmatic language. And for this, we used the work “The Dogmatic Aeon” by a great Romanian philosopher, Lucian Blaga, which emphasizes the intellectual and philosophical superiority of dogma. 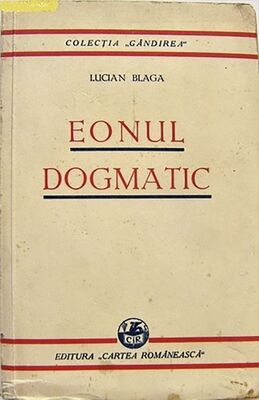 For Blaga, dogma is a way of knowing, which does not narrow, but on the contrary, opens to mystery. After analyzing dogma from a philosophical point of view, Blaga comes up with some extraordinary definitions: “Dogma is the intellectual expression of mystery” or “[Dogma is an] intellectual formula that postulates—in radical disagreement with understanding—a transcendence of logic.” Or, “dogmas are transfigured antinomies, which postulate solutions in transcendence; that is, not mere contradictions, but formulations that refer to a solution beyond reason, and further still.” For Blaga, the dogma takes the form of an invitation to ascension, to openness to the mystery, because any approach to God presupposes a dogmatic preparation for the mind: “Every dogma is an antinomy for the logical possibilities of the human intellect, but every dogma also includes in the very terms it uses a precise indication that logic must be overcome and that the antinomy is supposed to be resolved against our abilities of understanding.”

Speaking of the genius of the Holy Fathers, the creators of dogmatic formulations, Blaga states that only “the Holy Fathers were accorded a metaphysical meaning of a singular depth, which deserves to be more intensely emphasized.” “The Fathers’ way of formulating, the gift by which they knew to highlight the mystery, without rationalizing it, the remorseless renunciation of logic after exhausting all its subtleties, snatching the concepts from their logical chaining and endowing them with other virtues, are just as many facts of patristic spirituality, able to impress even today.”

So, far from being narrowing, dogma is a type of knowledge that invites mystery, transcendence, knowledge of God, and a living relationship with Him.

Messiah: The Son of God