The second evening of the new spiritual series evenings took place on Thursday, October 21, on the monastery’s YouTube channel. The title of the evening was “Messiah: The Son of God.”

If the previous series of spiritual evenings focused on the annunciation of the Messiah’s coming, this series focuses on what the Messiah, Who is come, brought us. And perhaps one of the greatest revelations is that He, the Messiah, is the Son of God.

It was normal for this great, long-awaited Messiah to bring us more than we knew, more than we could imagine. That is why Moses said He was to be obeyed (“The Lord your God will raise you up for you a Prophet like me from your brethren. Him you shall hear”) because He would bring something that would amaze and stumble everyone. That was what happened with the Jews. We see this in the Gospel: “Therefore the Jews sought all the more to kill Him, because He not only broke the Sabbath, but also said that God was His Father, making Himself equal (ἴσος) with God” (John 5.18). 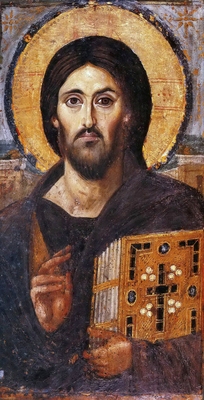 We notice the Jews understood what it was about but could not receive it. An example of this is a report by the Finnish university professor Risto Santala. While by his dying son’s bedside in a hospital in Jerusalem, a close Jewish linguist came to him and suggested that he convert to Judaism, among other things. Risto replied there was no reason to do so since Jesus Christ fulfilled the law and is the Son of God. But the Jewish professor, opening the Bible, told him it did not say anywhere God had a son. At this, Risto Santala asked he read Read Proverbs 30.4. And he read, “Who ascends into heaven and descends? Who gathers the winds in His bosom? Who wraps up the waters in a garment? Who rules over all the ends of the earth? What is His name, and what is the name of His children? That you might acknowledge it!” The Jewish linguist reacted by saying that the text could not be taken ad litteram but had to be interpreted. Risto asked him to read on, “All the words of God are tried in fire, and He defends those who fear Him. Do not add to His words, that He might not reprove you, and you become a liar” (Proverbs 30.5–6). In a way, it seemed the goal was achieved by these words.

We chose to speak of the Messiah as the Son of God as the main revelation because it involves us. Father Dumitru Stăniloae says, “The Second Person of the Holy Trinity became incarnate to put us, men, in a sonship with God the Father.” The Son of God’s becoming incarnate involves us because it puts us in the same position or teaches us to be in a relationship of sons of God. St John the Evangelist’s words echo this as well: “In the beginning was the Word, and the Word was with God, and the Word was God. … And the Word became flesh and dwelt among us. … But as many as received Him, to them He gave the right to become children of God, to those who believe in His name” (John 1.1–14). This is the most important idea He brought us. All who believe in the Messiah are empowered to become children of God by following Him.

The incarnation of His Son is proof God is close to man and man is precious to God. “For God so loved the world that he gave His only begotten Son, that whoever believes in Him should not perish but have everlasting life. For God did not send His Son into the world to condemn the world, but that the world through Him might be saved” (John 3.16–17).

The Messiah also brought us familiarity with God. God is with us, He is on the way; one can be with Him in pain, but also in joy. In a remarkable text of St John Chrysostom, this idea of ​​God close to man is masterfully exemplified: “I am Father, I am brother, I am bridegroom, I am dwelling place, I am food, I am raiment, I am root, I am foundation, all whatsoever you will, I am. Be in need of nothing, I will be even a servant, for I came to minister, not to be ministered to; I am friend, and member, and head, and brother, and sister, and mother; I am all; only cling closely to me. I was poor for you, and a wanderer for you, on the cross for you, in the tomb for you, above I intercede for you to the Father; on earth I have come for your sake as an ambassador from my Father. You are all things to me, brother, and joint heir, and friend, and member.”

He Who Bears His Cross Does Not Need Miracles

The Cross: The Path to Salvation