The last spiritual evening in the series The Fulfillment of the Law and the Prophets: About Christ, From the Prophets took place on Thursday, June 9, as usual, on the YouTube channel of the monastery. The title of the evening was “The Messiah Was to Come before the Fall of the Second Temple in 70 AD (Daniel 9.24–27)” and centered on prophecies about the date before which the Messiah was supposed to come. We underscored various Jewish or Old Testament writings that emphasized this temporal factor in connection with the Savior’s coming.

One of the writings that highlights a clear date by which the Messiah was to come is “Jacob’s Prophecy”: “The scepter shall not depart from Judah, nor lawgiver from his loins, until Shiloh comes; and to Him shall be the expectation of the nations” (Genesis 49.10). So the Messiah had to come before the end of the Jewish royalty line. And we know that ended because the Jews were dispersed all over the world. 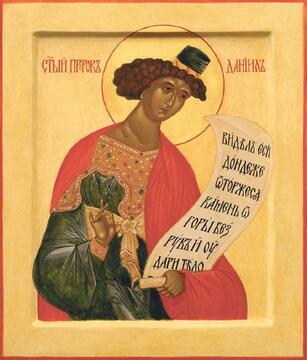 But the central text comes from the Prophet Daniel: “Seventy weeks are determined for your people and for your holy city to finish sin, to set an end to sin, to wipe out lawlessness, to atone for wrongdoings, to bring in everlasting righteousness, to seal up vision and prophecy, and to anoint the Holy of Holies. You shall know therefore and understand that from the going forth of the word to be answered and to build Jerusalem, until Christ the Prince, there shall be seven weeks and sixty-two weeks. Then the time shall return, and the streets and the wall shall be built; the times shall be left desolate. After the sixty-two weeks, the Anointed One shall be put to death, yet there shall be no upright judgment for Him; and he shall destroy the city and the sanctuary with the prince who is coming, and they shall be cut off with a flood, and to the end of the war, which will be cut short, he shall appoint the city to desolations” (9.24–26).

This text is extraordinary because it speaks of the Anointed One’s coming— the Messiah—and His ensuing blameless death. And an even more concrete fact is the mentioning of the coming of a foreign ruler’s people who will tear down the city of Jerusalem and the Sanctuary. The Prophet Daniel makes a direct connection between the death of the Messiah and the demolition of the Temple.

There are many arguments in support of this interpretation. First, the Jews have always referred to this prophecy as suggesting the Messiah. Maimonides (c. 1135–1204 AD) says this in his letter to the Jews of Yemen: “But Daniel clarified for us the depths of the knowledge of the end times. However, because they are secret, the sages, may their memory be a blessing, forbade the calculation of the days of the Messiah’s coming, so that the uneducated people would not be lost when they saw that the end had come and there was no sign of the Messiah. For this reason, the sages, may their memory be a blessing, decreed: Cursed be he who calculates the end of times! But we cannot say that Daniel was wrong in his calculation.”

Also, the historian Josephus, who was contemporary with these events, wrote in his book, The Antiquities of the Jews: “In the same way, Daniel wrote about the Roman rule and that the land would be destroyed by them” (X, 11, 7). He explains the reference to the Romans in the prophecy of Daniel.

Another argument is found in the Talmud, Yoma 39b: “The Sages taught: During the tenure of Shimon the Righteous (hierarch in the third century BC), the lot for God always arose in the high priest’s right hand; after his death, it occurred only occasionally; but during the forty years prior to the destruction of the Second Temple, the lot for God did not arise in the high priest’s right hand at all. So too, the strip of crimson wool that was tied to the head of the goat that was sent to Azazel did not turn white, and the westernmost lamp of the candelabrum did not burn continually. And the doors of the Sanctuary opened by themselves as a sign that they would soon be opened by enemies, until Rabbi Joḥanan ben Zakkai scolded them. He said to the Sanctuary: Sanctuary, Sanctuary, why do you frighten yourself with these signs? I know about you that you will ultimately be destroyed, and Zechariah, son of Ido, has already prophesied concerning you: ‘Open your doors, O Lebanon, that the fire may devour your cedars’” (Zechariah 11.1).

The Finnish professor Risto Santala draws the conclusion from all these references, saying: “Since we know that Titus took Jerusalem and destroyed the Temple in 70 AD, we can understand that when the Talmud speaks of the events of 40 years before this it is referring to the year 30, which is most commonly recognized as being the year of Jesus’ death. […] By the time the city of Jerusalem and the second Temple have been destroyed, the Messiah ought to have already come.”

This conclusion regarding prophecy also applies to all our spiritual evenings so far. The concordance between the Christian and Jewish traditions on prophecy is noteworthy and surprising as well.

The Messianism of the Ancient Rabbis