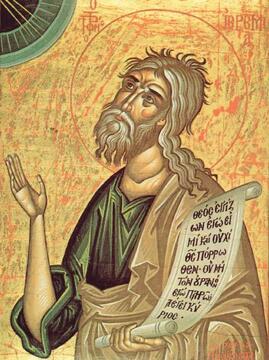 At the beginning of May, we celebrated the holy Prophet Jeremiah. He lived during the destruction of Solomon’s Temple in 587 BC. Although he prophesied the imminent conquest of Jerusalem and the demolition of the Temple, the Prophet Jeremiah was not believed by the king and the priests, who listened to the voice of false prophets instead. After the unthinkable disaster, the prophet wept over the ruins of Jerusalem and the Temple:

“How does the city now sit alone
She who was full of people?
She has become like a widow,
She who was ruling among the countries!
She weeps bitterly in the night;
She sheds tears on her cheeks.
Yet among all her lovers there is no one who comforts her.
All who love her have dealt treacherously with her.
They have become her enemies.

“The roads of Zion mourn.
Because no one comes to the feast.
All her gates are destroyed,
Her priests groan,
Her virgins are led away,
And she is embittered in herself.

“Her oppressors have become the master.
And her enemies prosper;
For the Lord humbled her
Because of the greatness of her ungodliness.
Her infants have gone into captivity in the presence of the oppressor.

“From the daughter of Zion
All her beauty has departed.
Her princes have become like rams
That find no pasture,
And the journey in weakness
Before the face of the pursuer.

“Jerusalem remembers her days of humiliation and rejection.
She remembers all her objects of desire,
What she had in days of old,
When her people fell into the hand of the oppressor,
When there was no one to help her.
When her enemies saw this, they laughed at her deportation.

“Jerusalem sinned grievously;
Therefore, she became a storm-tossed sea.
All who glorified her have humiliated her,
For they saw her shameful acts,
And indeed, she groans and turns away.

“The oppressor has spread his hand
Over all the objects of her desire,
For she sees the Gentiles entering her sanctuary,
Those whom You commanded not to enter Your church.

‘All you who pass by, do not turn away,
And see if there is any pain like my pain
Which has happened to me.
The Lord who spoke by me
Humiliated me in the day of His fierce anger.

‘From His lofty place He sent fire
And brought it into my bones.
He spread a net for my feet
And turned me back.
He caused me to perish
And to be in great pain all the day.

‘He kept watch on my profane acts;
They are entangled together with my hands;
They come up about my neck.
My strength weakens.
For the Lord has caused my hands to be in pain.
I shall be unable to stand.

‘The Lord drove off all my mighty ones from my midst.
He summoned an appointed time against me
To crush my chosen men.
The Lord trod a winepress for the virgin daughter of Judah,
And for these I weep.

“Her king and her princes are among the Gentiles,
And the Law is no more;
And indeed, her prophets see no vision from the Lord.

“The elders of the daughter of Zion
Sit on the ground and keep silence.
They throw dust on their heads
And gird themselves with sackcloth.
They have brought down to the ground
The leading virgins in Jersualem.

“My eyes fail with tears,
And my heart is troubled.
My glory is poured out upon the ground.

“What shall I testify to you,
Or what shall I compare to you,
O daughter of Jerusalem?
Who will save and comfort you,
O virgin daughter of Zion?
For the cup of your destruction is great;
Who shall heal you?

“Your prophets have seen foolishness
And worthless things for you,
But they did not reveal your wrongdoing
So as to turn back your captivity.
Instead, they saw worthless burdens
And banishment for you” (2.9–14).

“The kings of the earth
And all inhabitants in the world
Would not believe
That the enemy and oppressor
Could enter through the gates of Jerusalem” (4.12). 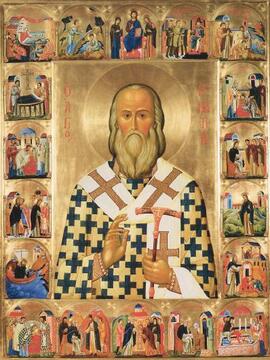 In an extraordinary modern text, St. Ignatius Brianchaninov (1807–1867) uses the Lamentations of the Prophet Jeremiah to mourn the human soul:

“When Jerusalem was spoilt and destroyed, and her inhabitants taken captive into a far-off country, then Jeremiah the prophet—who had prophesied in vain about Jerusalem’s woes because of the iniquity of her inhabitants and had called the wicked with hardened hearts and blind eyes to repentance to no avail—remained on the ruins of Jerusalem to weep for his fulfilled prophecy. With sighs, with perturbed groans, upon the ashes of the burnt temple; the temple that passed as a miracle of architecture and was the only one on earth raised to the glory of the true God. The prophet uttered inconsolable laments on the rubble of the city; it was the only city on earth where the worshipers of the true God could worship Him just as He had ordained, the only prayer well received by God.

My tears do not fall upon the rubble or heaps of ashes; I do not weep for a manmade temple of marble, porphyry, and incorruptible wood. I do not sigh on the ruins of the city that was built throughout centuries with the strong arms of kings, of peoples, of gold; my lamentations do not accompany the multitudes of Jews in their flight, carried into secular bondage by numberless armies—the cause of my laments is moral, and their realm is that of the soul. I mourn the burning of an invisible temple, not built by human hand, which God created for an unseen, lofty divine service. I mourn the collapse of a mysterious city meant to be the home and shelter of blessed thoughts and feelings. I mourn the fall into captivity of the soul, the mind, and the heart subjugated by sin. They are held hostage, bound in chains of passions, taken into slavery to the kingdom and the city of Babylon, under the rule of the condemned archangel, both angels and men…”

Pastoral Letter for the Feast of the Lord’s Resurrection 2021