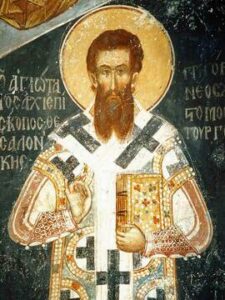 Saint Gregory Palamas was born in 1296, in Constantinople, to a family of very pious Christians with ties to the court of Emperor Andronicus II, his father being an imperial dignitary. A lover of books, he engaged in the study of various sciences, acquiring extensive knowledge. But at the age of twenty, he retired to Mount Athos, where he learned all the monastic spiritual struggles and, above all, the whole tradition of hesychastic prayer, later becoming one of its greatest defenders.

In 1347 he was appointed archbishop of Thessaloniki. He died on November 14, 1359, and was canonized in 1368. One of the Church’s greatest theologians, he is commemorated on the second Sunday of the Great Lent. He had great devotion to the Mother of God. In fact, he spent the first three years of his monastic life praying: “Mother of God, enlighten my darkness!” He dedicated words of unparalleled beauty to the Mother of God, from which we chose a few small excerpts.

“[…] She, from the beginning of time, was chosen from among the chosen. She Who is manifest as the Holy of Holies, Who has a body even purer than the spirits purified by virtue, is capable of receiving … the Hypostatic Word of the Unoriginate Father. Today the Ever-Virgin Mary, like a Treasure of God, is stored in the Holy of Holies, so that in due time, (as it later came to pass) She would serve for the enrichment of, and an ornament for, all the world. Therefore, Christ God also glorifies His Mother, both before birth, and also after birth. We who understand the salvation begun for our sake through the Most Holy Virgin, give Her thanks and praise according to our ability.” (Sermon on the Entry of the Mother of God into the Temple)

“The Virgin Mother, and she alone, is the frontier between created and uncreated nature. All who know God will recognize her as the one who contained Him Who cannot be contained. All who sing hymns to God will praise her next after Him. She is the cause of the benefits which preceded her, the protectress of those which came after, and through her those good things which are eternal shall be received. She is the theme of the prophets, the first of the Apostles, the support of the martyrs, the dais of the teachers. She is the glory of those on earth, the delight of those in heaven, the adornment of the whole creation. She is the beginning, fount and root of the hope stored up for us in heaven.” (Sermon on the Annunciation)

“Who can describe in words thy divinely resplendent beauty, O Virgin Mother of God? Thoughts and words are inadequate to define thine attributes, since they surpass mind and speech. Yet it is meet to chant hymns of praise to thee, for thou art a vessel containing every grace, the fulness of all things good and beautiful, the tablet and living icon of every good and all uprightness, since thou alone hast been deemed worthy to receive the fulness of every gift of the Spirit. Thou alone didst bear in thy womb Him in Whom are found the treasuries of all these gifts and didst become a wondrous tabernacle for Him; hence thou didst depart by way of death to immortality and art translated from earth to Heaven, as is proper, so that thou mightest dwell with Him eternally in a super-celestial abode. From thence thou ever carest diligently for thine inheritance and by thine unsleeping intercessions with Him, thou showest mercy to all.” (Homily on the Dormition)

What Does It Mean for Me to Become a Christian?