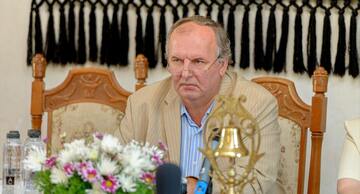 Some time ago, a symposium on “The Ethics of Memory” was held at Putna Monastery, in an exclusive setting. The topic seemed handy to me at first. I knew and still know people who are on the side of integral, upstanding, non-perverted memory. With some I had a direct relationship; others I read admiringly—I knew their stories. For most mature individuals in our society there exists a symptom of “outraged memory.” Recent history has undoubtedly been a test of memory manipulation and falsification; it has been the environ of continuous abuse. But I wonder if any random young man, born after the fall of the communist camp, still has the same understanding of the approximation of the two terms: ethics and memory. In a more general sense, ethics is the science of moral reality; it deals with the research of moral issues, trying to deliver answers to questions such as: What is good/evil? How should we behave? Entering a congeries of countries in the greater Europe depends on the naturalness of the evolution of history. Only there seems to be a price for this alignment: giving up one’s own memory, assuming a collective memory, annihilating small cultures that become details in a concept acting like a crucible. In the end, wins the one who imposes his own memory, his own truth. Because memory, in a broader sense, is also a matter of truth. But does the young man mentioned above, born in a period of agglutination of civilizations, still distinguish his historical gene in the gaggle of “collective memory voices”? Does he still have any motivation to make this distinction?

A great thinker of our times, Tzvetan Todorov, in an excellent essay, “The Abuses of Memory,” states a few undeniable things: “Memory necessarily means selection. Retaining without selecting is not yet a matter of memory. What we blame on the Hitlerite and Stalinist executioners is not the fact that they retain some and not all elements of the past—we ourselves would not do otherwise—but that they claim the right to control that which is to be retained. No higher court in the state should be able to say: You have no right to seek the truth of things yourself, and those who do not accept the official version of the past will be punished. At stake is the very definition of life in democracy: Individuals, and groups, have the right to know, and therefore to learn and make known their own history; it is not the central power that must forbid or allow it. It is not the role of the law to write history; condemning slander or incitement to racial hatred is enough.”

On his first visit to Bucharest in 1991, at the end of a book launch, Virgil Ierunca said something that seemed meaningless to us then: “What is the most urgent thing today? What is the most urgent thing here and now? That we do not forget. That we do not forget collectively…!” Here we can also discuss something of the Paterikon wisdom, which says, “There is a great sin, that of not forgetting; but there is an even greater sin, that of forgetting.”

An acultural being is one who has never mastered the culture of his ancestors or who has forgotten or lost it. What will happen to the aforesaid young man, who opened his eyes during an eclectic culture in which the present is the average between the past and the future? Is he still responsible for the culture of the nation from which he comes? Has the social, human, moral paradigm not changed by merely changing contexts? But it is known that memory is ruthless with those who do not consider the force of evil to return throughout history.

But as a nation, as a society, we have at hand an extraordinary landmark that can give meaning to the immediate memory, which can ethically value recent history. It is the Memorial of the Victims of Communism and of the Resistance from Sighetul Marmației founded and administered by the Civic Academy Foundation, at the initiative of writers Ana Blandiana and Romulus Rusan. In 1998, the Council of Europe placed the Sighet Memorial among the main sites for preserving the continent’s memory, alongside the Auschwitz Memorial and the Normandy Peace Memorial. The documents and texts that contributed to the creation of the Memorial’s framework of ideas and principles specify: “The greatest victory of communism—a victory dramatically revealed only after 1989—was the creation of the memoryless man, the new brainwashed man, who must remember neither what he was, nor what he had, nor what he did before communism. The realization of the Memorial to the Victims of Communism and Resistance is a means of counteracting this victory, a means of resuscitating the collective memory. Made up of the Sighet Museum and the International Center for Studies of Communism and based in Bucharest, as well as being the organizer of the Summer School, the Memorial is an institution of Memory, unique in that it is simultaneously an institute of research, museography, and education. To the question, ‘Can memory be relearned?’ the Memorial to the Victims of Communism and of the Resistance in Romania is a resounding affirmative answer. Because without memory and, implicitly, without history, any ‘country project’ is a political sketch penciled sloppily, hypocritical and worthless.”

What Does “Mother” Mean to Me Now, in Canada?

“Mother of God, Enlighten My Darkness!”