During the Great Lent, the Romanian Orthodox Metropolia of the Americas organized the series Spiritual Evenings of Lent on every Thursday of the month on Zoom. These spiritual evenings were held by guests from Romania.

The first such evening addressed a beautiful theme, entitled “The Mother of God, Champion Leader of Christians in Times of Trials” and was presented by Father Archimandrite Melchisedec Velnic, abbot of Putna Monastery. Here are some excerpts from the richness of his words: 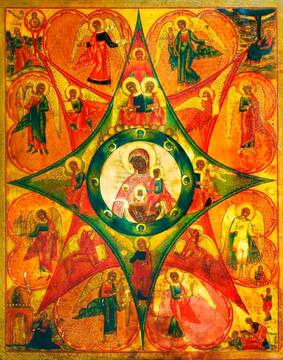 The chosen theme is one of great beauty, profound, spiritual, and within the reach of all Christians. Because the Mother of God is by our side, she has always been and remains the one who protects us and guides us, like a mother. Just as a mother teaches her little ones how to worship icons—and we fondly remember our mothers who raised us in the fear of God—so does the Mother of God, who watches over all Christian people and not only them.

I would say that the Mother of God looks upon the entire creature with mercy. She is a mother, so her heart cannot be in any other way but motherly. The heart of a mother who gives herself over, a mother who sacrifices herself. A writer of our Orthodox Church writes very nicely on the source of the Mother of God’s power: “Let us praise her, not as to add to her glory, but to beget drops of grace for us, the faithful, who dedicate ourselves to her with warmth, love, and tenderness. Let us always remember her infinite graces by which she adorned the whole world. It is a ridiculous assertion to be called Mary’s children and not to imitate her virtues. It is ridiculously presumptuous to believe that the Most Holy Mother of God will allow among her children those who do not conform to this beautiful and admirable paradigm. And what should we imitate especially in our Mistress if not this love so strong, so delicate that she had for our Lord Jesus Christ, who is Mary’s living source of virtue and perfection.” So our Lord Jesus Christ, upon whose name we are compelled to call, is the most powerful source of virtue for her, for the Virgin Mary, but also for us, as sons of the Church of Christ.

Father Dumitru Stăniloae of blessed memory, in the book The Gospel Image of Jesus Christ, shows the close connection between the Virgin Mary and our Lord Jesus Christ. Here is what Father Dumitru Stăniloae says: “The union between mother and son is ever present, but especially during the carrying of the son in the womb; it is so great that the mother lives in everything of the son without being confused with him. It is a mystery related to the presence of the soul in the baby, from his conception. It is the mystery of maximum love between mother and child, which unites them without confusing them.” Through the mystery of the union between the Son of God incarnate of the Virgin Mary and the Most Holy Mother of God, the divine Infant felt all that pertained to His Mother. The abovementioned church writer rightly said that the source of holiness and all virtues in the Mother of God was the Son of God, the One incarnate of her. But we also know her efforts too well, from the songs of the Nativity. Through her humility, the Virgin Mary determined—if I may so bold—the Godhead to abide in her. She was the chosen vessel, the fragrant lily, humble, ever so humble. And thus, the Godhead indwelt her because she attracted the fire of the Godhead.

We know how the song of the Blessed Virgin Mary goes further: “My soul magnifies the Lord. And my spirit has rejoiced in God my Savior. For He has regarded the lowly state of His maidservant; for, behold, henceforth all generations will call me blessed. For He who is Mighty has done great things for me, and holy is His name” (Luke 1.46–49).

I would like to insist a little more, to focus on this word of the Virgin Mary— “He has regarded the lowly state of His maidservant”—and to reinforce what I said before, that the Godhead was overwhelmed by the humility of the Virgin Mary, or that her humility attracted the Godhead, and consequently the Son of God became incarnate of her. And the word “henceforth all generations will call me blessed” shows that she is honored by the whole world, by all who honor and adore her Son. Because you cannot honor the Son without honoring the Mother. Without the Mother of God, one cannot receive the fruit of the redemption of the Son of God.

These are but a few words about the Virgin Mary, as the Apostolic Fathers saw her.

All monks and Christians run to the Mother of God in times of hardship, for she, as our Mother, told us to do so. We do not have many words left from the Virgin Mary, but we do have a beautiful, special one, uttered at the wedding in Cana of Galilee: “Whatever He says to you, do it” (John 2.5). What does Christ tell us? The Gospel’s testimony is that if we keep His word, we can never go astray from the Virgin Mary or forget about her. Therefore, our thought and contemplation recommend, with love and joy, that in every home the Mother of God be honored because she is quick to hear and quick to help.

Here are some verses from the Akathist Hymn to the Mother of God written by Father Daniil Sandu Tudor, who died in the communist prisons. In the first kontakion he speaks of her as the Mother of Prayer:

“Who might this be, bright as dawn and most fair?
She is the Prayer Queen, incarnation of prayer.
Porphyrogenita, our Lady of Light
The Comforter’s bride, who changes our life!
Consumed by longing, our love unbound
Make us partakers of the Holy Tabor Mount.
And be for us
Both shade and dew,
Beclouded by grace,
Embrace us anew.
Restore our nature,
We beseech You.
We cry unto you with all of creation,
In full and profound veneration,
Of your wealth of grace ever increasing:
Rejoice, O bride, weaver of prayer unceasing!”

Father Daniel fully knew the mystery of the Burning Bush: The one who supports us to have the name of our Lord Jesus Christ constantly in our hearts, permanently hymned and praised therein, is none other than the Virgin Mary. That is why he says, “Make us also partakers of the Holy Mount Tabor”— that is, let us become partakers of that mysterious light which springs from the Prayer of Jesus. And he concludes with the words: “Rejoice, O bride, weaver of prayer unceasing!” because she weaves uninterrupted prayer in our hearts.

Just as a mother is capable of any effort for her son, the Mother of God gives herself even more to us as her sons and does whatever it takes to make us truly feel that we are her children through her grace. She takes us by the hand and teaches us to go to her Son. Just as a mother teaches her son to go to church, to venerate icons, to pray, to read— teaching him the first steps—so does the Virgin Mary teach us the first steps on the path of the Lord Jesus’ name.

What Does “Mother” Mean to Me Now, in Canada?