On the Sunday before the Nativity of the Lord, the Holy Apostle Paul puts before us the city with strong foundations built by God through his righteous people, culminating in the Incarnation of His Son. 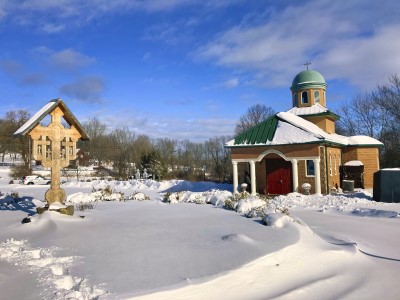 Thus we have the Epistle of St. Paul to the Hebrews wherein Saint Paul praises all the righteous of the Old Testament. And he begins with Abraham: “By faith Abraham obeyed when he was called to go out to the place which he would receive as an inheritance. And he went out, not knowing where he was going” (11.8). God merely called him. This call of His is rather interesting for God could not speak to him, and Abraham could not respond to God’s call properly if he were to remain amid his people. And God did not tell him where to go and what to do, but by faith he obeyed, not knowing where he was going. It was also by faith that Abraham lived temporarily in the land of promise, Canaan, “as in a foreign country, dwelling in tents with Isaac and Jacob, the heirs with him of the same promise” (11.9). They did not own that land. Although a great work was about to be wrought through them, God left them for a while hanging—so to speak—in uncertainty, without ownership of even a small parcel of land. That is why St. Paul says: “For he waited for the city which has foundations, whose builder and maker is God” (11.10).

St. Paul uses this contrast between the tents in which Abraham lived and the city that God was building precisely through them. They were at the foundation of that city, yet they dwelled in tents. But the image of God as the city builder stands out. And this is exactly what the genealogy in today’s Gospel shows: what God built as the master maker, how He succeeded in bringing man from the abyss up to the Incarnation of His Son.

Men, in their madness, built the Tower of Babel whose top they wished “to reach heaven” (Genesis 11.4), and then God confounded their languages so that they would not understand one another and finish it. But in parallel, He built this city with strong foundations that leads to heaven. And that is exactly what happened. God made the people who reached the heights, the Mother of God being the very top, and through her heaven was united with earth, the Creator with the creature, and thus the Savior came.

And to partake even more of this miracle, let us quote a few words from the Holy Prophet Isaiah, in which God speaks unequivocally about who He is. It also allows us to see the unfathomableness of the miracle effected through this entire genealogy and through God’s work as the builder of the city:

And now, thus says the Lord God who made you, O Jacob, and who formed you, O Israel: “Fear not, for I redeemed you. (…) at you may know and believe and understand that I am He. Before Me there was no other God, nor shall there be after Me. I am God and besides Me there is no one who saves. Even from the beginning, there is no one who can deliver out of My hands: I will work, and who will reverse it? I am the Lord God, your Holy One, who made known your king O Israel” (43.1, 10–15, 15). “I am the first and the last; besides Me there is no god” (44.6). “I am the Lord God. There is no God besides Me, and you have not known Me. I will call you by name and accept you, so those who come from the east and the west may know there is none besides Me. I am the Lord God, and there is no other.” For thus says the Lord, who made heaven—this is the God who formed the earth and made it. He established it, and did not make it in vain, but formed it to be inhabited—“I Am, there is no other” (45.5–6, 18).

Truly great is this Feast of the Incarnation, and wondrous is the city built by the One God: the union of the Creator with the creature.

Christ in the Psalms

Why Didn’t the Rabbis Recognize and Receive Christ?