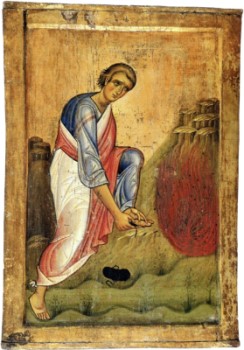 The first spiritual evening in the series held on every third Thursday of the month within the educational project Exploring your faith!—held with the blessing of His Eminence Nicolae, Metropolitan of the Romanian Orthodox Metropolia of the Americas—took place on November 19, 2020, online, on St. Dumitru Monastery’s YouTube channel.

The first six spiritual evenings are entitled “The fulfillment of the Law and the prophets: About Christ, From the Prophets.” Especially because they start at the beginning of the Nativity Lent, they aim to show how the coming of Christ the Savior was announced by the prophets, and how they delineated His portrait many hundreds of years before. This is to foster a deeper, more plenary knowledge of the mystery of the Savior’s Person and to strengthen our zeal to follow Him, seeing the thoroughness and long-suffering with which God wrought mankind’s salvation.

It is scientifically proven, through the discovery of the Qumran manuscripts in the period 1946–1957, that the writings of the prophets and, in general, the entire Old Testament, predate the Savior’s Birth.

The title of the first evening was “If you believed Moses, you would believe me; for he wrote about me” (John 5.46), and it set out to analyze the testimony about Christ given by the great Moses, the central figure of Judaism, the lawgiver on Mount Sinai. It is evident that in the Jewish tradition no other prophet or righteous man rose to the level of Moses, “who learned the law from the mouth of the Almighty” (the Great Midrash on the Book of Exodus).

Well, Moses gives the following testimony: “The Lord thy God will raise up unto thee a Prophet like unto me from your brethren; unto him you shall hearken. (…) I [God] will raise up for them a Prophet like you from among their brethren, and I will put My words in His mouth, and He shall speak to them all I command Him. Therefore, whatever man will not listen to whatever the Prophet speaks in My name, I will require it of him” (Deut 18.15–19).

Archbishop Victorin Ursache: A Saint among Us