I can’t remember what year, month, or day it was, but I was attending the services at St. Nicholas Church in Queens, NY. The priest who served the parish was Father Vasile Vasilache, who was my spiritual father for many years.

One Sunday, after the Divine Liturgy, he announced that for a short period he would be traveling in Romania, and that his substitute would be His Eminence Victorin Ursache, the Archbishop of North America at that time. I felt the need to ask Father Vasilache for a blessing to confess to His Eminence, and Father gave me that blessing, along with the special smile he often had when he blessed me. 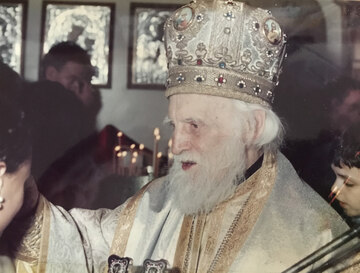 I was filled with an extraordinary feeling when I saw His Eminence Victorin for the first time, serving the Divine Liturgy in our church! At the appropriate time, I asked His Eminence to hear my confession, mentioning also that Father Vasilache had given me a blessing. My request was granted, and a few days later I found myself in Confession with His Eminence.

I was very nervous, because whenever I saw him during the services, I felt like a living saint was serving in the Holy Altar. Nonetheless, my nervousness dissipated quickly because his presence enveloped me with a feeling of humility and divine love!!!

At the end of Confession, I asked for a penance, but His Eminence Victorin responded with this anecdote: “Many years ago, I was the superior of the Romanian Skete at Jerusalem, and would serve in the Holy Altar with Father John Jacob the Chozebite. As the superior, I would often reproach him for certain mistakes he would make, and Father John would make many mistakes. And, you see, I would judge him for those mistakes and would ask myself why he wasn’t learning from them, even though I was reproaching him often!? Yet now, Father John is a saint and I am still full of sins.”

A deep silence followed. I was asking myself what exactly His Eminence was trying to tell me through this personal story!? Various thoughts and answers crossed my mind. In that silence, I was expecting to hear my penance after Confession. The silence drew on, until I finally ventured to ask, sincerely, what he wanted to convey through that story, because I didn’t know if I was interpreting it correctly.

Then he said: “I don’t want to bind you with a hierarchical penance, but here’s some advice… Never judge anyone, ever! You see, I would judge Father John, and sometimes would even reproach him harshly, but he was already a saint. And I am still full of sins.”

I was stunned. But His Eminence blessed me on the head and it was as if my soul returned back to normal. Then I said, “Your Eminence, it would have been better for you to give me a penance, because you shared with me one of the highest steps in the spiritual life! And I want to say that I’m stunned, because Saint John Jacob the Chozebite is very dear to me. And now, standing here before Your Eminence, after your story, I feel like Saint John Jacob is also here present!”

He smiled and touched my hand with his. O Lord, what I felt when his hand touched mine for a fraction of a second! Divine love, deep humility, deep peace from another world! It’s hard to find words to capture that feeling!

His Eminence’s hands were translucent, as if they were already from the Kingdom of Heaven; likewise, his entire frail body seemed the same way. And I told myself, “O Lord, this man’s hands and body already exhibit the dryness of sainthood!” In my soul, the conviction remained that His Eminence Victorin Ursache was and is a holy man!

Glory to God that I had the blessing to meet such a hierarch. Through his prayers, O Lord Jesus Christ, have mercy on me, a sinner!