The eighth spiritual evening had as its central theme a gift sweet to our souls: the Mother of God. 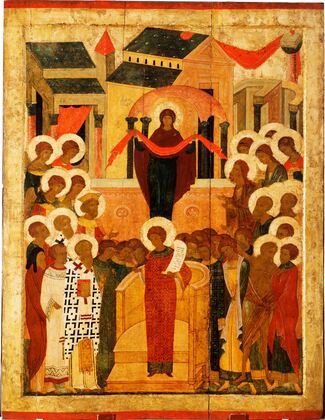 The Mother of God fulfills par excellence the dialogue of gifts that Father Dumitru Stăniloae beautifully describes: “The dialogue of gifts between God and man is that each one devotes himself to the other. But man has nothing to give to God from himself. God is glad when man gives up some of the gifts he has received, and gives them back to Him. This is man’s sacrifice. Through this, he shows that he recognizes that everything he has is a gift from God and ultimately belongs to Him.”

The Mother of God is in many ways a gift of the Messiah. First, because she made herself a gift. She is also a gift through the very beauty of her soul, and, last but not least, she is a gift as a role model and as love (service, intercession, consolation).

She devoted herself as a gift, following the things Saint Anna, her mother, told her when she took her to the Temple at the age of three, fulfilling the promise she made to God: “Go forth, my child! Be thou an offering and incense of sweet savor unto Him Who gave thee to us! Enter into the place that cannot be entered and learn the mysteries! And prepare thyself to be the gladsome and beauteous dwelling-place of Jesus, Who bestoweth upon the world great mercy!” (Aposticha from Great Vespers for the Entrance of the Mother of God in the Temple). Highlighting the dialogue of gifts, and especially the gift that God placed in His Mother, Saint Gregory Palamas says, “Of all the virtues that were needed by all who throughout the ages partook of the best things in order to become better, and of all the gifts granted by God, both men and angels enjoyed them only in part. But the Mother of God perfectly received everything; she alone fulfilled all, and she alone overflowed with all these gifts in ways that cannot be described.”

The Mother of God is a gift herself, and we see this best in the Axion of the Liturgy of St. Basil the Great. “All of creation rejoices in you, O full of grace: the assembly of angels and the human race. You are a sanctified temple and a spiritual paradise…” We feel her presence in her icons, through which she grants us a bit of her grace. She is joy and grace to all, both to angels and to men.

For us, the Mother of God is a gift, both in that she is our role model and in what she does specifically for us. As a role model, she made herself a humble handmaiden of the Lord, and then she became a mother. From this we learn about her incomparable love toward her Son, which can inspire us too. Then, she was a disciple, a servant and a follower of the Word. Saint John, whose Gospel is full of symbols, presents the Mother of God in only two passages: at Cana of Galilee and at the Crucifixion, the beginning and end of His ministry. This may show that she was with Him from the beginning to the end; that is, always.

Archimandrite Zaharia Zaharou describes her as a servant, totally dedicated to God. “Her ‘hesychastic’ retreat into prayer, into the Holy of Holies, shows her complete death to the world and her cherubic appearance before the Living God, the God of her parents. She left her people and her father’s house (cf. Psalm 44:12) and, instead, exalted her prayers to God asking for the salvation of the whole world. Her second virtue is humility. She herself says, the Lord ‘has regarded the lowly estate of his handmaiden’ (Luke 1:48). The ‘nothingness’ of her deep and perfect humility became the ‘matter’ from which the Most-High God recreated the human race.” She received everything without grumbling, without defense, even when her life could have been put in danger.

Father Dumitru Stăniloae describes her maternal qualities beautifully and deeply. “There is always union between mother and son, but this is especially true while she bears her son in the womb; so great is the union, that the mother experiences everything her son feels without confusing herself with him.  It is a mystery that depends on the presence of the soul within the unborn child from the moment of conception. It is the mystery of maximum love between mother and child, which unites them without confusing them. […] Thus, when Elizabeth heard Mary’s voice, Elizabeth’s unborn child felt the power of the divine Child in Mary’s womb through the Holy Spirit radiating in her voice.”

The love between the Mother of God and her Son cannot be put into words. Saint Silouan the Athonite says, “We do not reach the fullness of the love of the Mother of God and therefore, we cannot fully understand her sorrow. Her love was perfect. She loved God and her Son immeasurably, but she also loved people greatly. What did she not live through when the people she loved so much, and whose salvation she wanted until the end, crucified her beloved Son? We cannot understand this because we have little love for God and men.” The saint prayed to her on our behalf: “O, Most Pure Virgin, Mother of God, tell us, your children, how you loved your Son and God when you lived on earth? How did your spirit rejoice in God, your Savior? How did you gaze at His precious face with the thought that He is the One whom all powers serve with fear and love?”

The oldest preserved prayer to the Mother of God dates back to the 3rd or 4th century: “Beneath your compassion, we take refuge, O Virgin Theotokos. Despise not our prayers in our necessity, but deliver us from harm, O only pure and only blessed one.” This is the greatest proof that followers of Christ, Christians, have always placed their hope in the Mother of God, and that they always understood that the Mother of God is the gift of the Messiah for us.

“Book People” at the Aiud Prison

True joy is shared with others