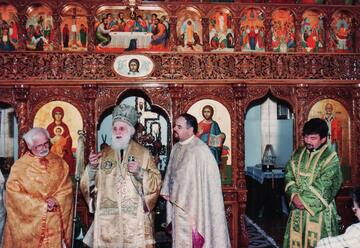 Among the great and profitable pieces of Biblical wisdom, one such appeal is the following: “Remember your leaders, those who spoke to you the word of God; consider the outcome of their life, and imitate their faith.” (Hebrews 13.7). One of “my leaders” was vladika Victorin Ursache of blessed memory, under whose omophorion and fatherly care I spent over 19 years, from when I stepped foot in America (1982) until the day when he reposed in the Lord, July 16, 2001. I would like to add here that Archbishop Victorin was not only my “leader”, in the sense of his administrative power or hierarchical responsibility, but I would highlight that he fulfilled another piece of Biblical wisdom, which says: “for though you might have ten thousand instructors in Christ, yet you do not have many fathers” (1 Corinthians 4.15).

How would I depict the fatherly countenance of Archbishop Victorin, even now, 21 years after his repose? I still see his gentle gaze and smiling face with which he greeted me at our first meeting, when I had just arrived in America. What could be more calming that an encouraging smile for a man who was dying from homesickness, being far from his wife, children, and everyone back home.

Someone once said that “a man’s face is the mirror of his soul” (according to Archim. Justinian Dalea). How pure was his soul and how full of kindness was his heart! To illustrate what I’d like to say through this, let me bring forth several testimonies from my experience with our father and Archbishop Victorin. I was a student, 1982-1984, and on Christmas and Pascha I would receive a check from him for $100. That was a huge sum in those years in America! My gratitude was even warmer when I later learned that he often wasn’t able to deposit his regular salary because of the weak contributions from the parishes in his jurisdiction. I also remember that on my birthday, he greeted me over the phone with a gentle voice, bringing a congratulatory message. And he did this for all his priests.

The Christians in his diocese came to appreciate his fatherly care and we all became convinced that he is a true preacher of the Gospel of Christ, both in word and in deed. Listening to his teachings, we all thought that we had gained a holy father, who taught with power.

Vladika Victorin can be remembered in many ways. Throughout the 35 years of his apostolate on the North American continent, he met many people. Even the Grayhound bus drivers knew him well, as he traveled by bus to all corners of America with Psalter in hand. That is why each one of his priests and each believer who met him saw for themselves this servant of Christ, who was Bukovinian from head to toe, peaceful, and with a pastoral style deeply rooted in Romanian Orthodox soil. He would embark on his pastoral missions full of the grace of the bishopric and he poured forth spiritual fruit through the Divine Liturgy and other religious services. He also presented the authentic image of a monk formed in Moldavian monastic spirituality. He also bore with him the spiritual fragrance of the Holy Land, where he spent a good number of years near Bethlehem, Jordan, Golgotha, and especially near his dear friend John Jacob of Neamț, who today is Saint John Jacob the Chozebite, canonized by the Patriarchate of Jerusalem. Whenever he arrived at a parish, the pockets of his cassock were full of sweets for the children who rushed up to him.

This is how our father Victorin shone even in our American land, like an Apostle, illumining the hearts of the faithful with the flame of his holy teachings and with the radiance of his humble life, serving here during a time of sad division within the Romanian Orthodox Episcopate founded by the first bishop, Policarp Morușca.

Our great hierarch strove to become all things to all men!

The Light of the Transfiguration is Uncreated