The spiritual evening, part of the “Exploring Your Faith” program, in the month of January took place on the YouTube channel of the monastery, the theme being: the Holy Cross. 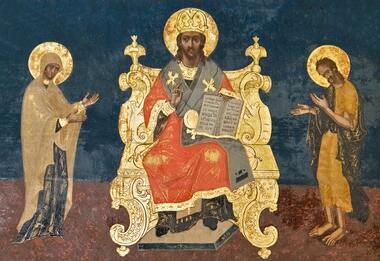 The cross as a gift, brought to us by the Messiah, is found in the words of Saint Basil the Great: “And descending through the Cross into hell, that He might fill all things with Himself, He loosed the pangs of death. rising on the third day, having made for all flesh a path to the resurrection of the dead.” This is clarified by Archimandrite Zacharias Zacharou: “He filled the whole universe with His divine energy, so that we, human beings, are able to meet Christ in all conditions; in all circumstances of this life. Be it during our joy, or during the hell of our torment, He is there.” He descended so deep, into hell, so that any man, from the most holy, to the greatest sinner, can be equally close to Him. There is no suffering that He does not understand.

Christ gives us the Cross out of love and with love for us. He says to His disciples, “Now I have told you before it comes, that when it does come to pass, you may believe… But that the world may know that I love the Father, and as the Father gave me commandment, so I do” (John 14.29-31). Paradoxically, this is the Cross, par excellence: the Savior’s love for the Father and for us. The grace of Golgotha ​​was greater than that of Tabor, for on the Cross we have the ultimate expression of God’s love for man.

From the Holy Apostle Paul, we learn a way to carry our cross: “Let us persevere in the struggle that lies ahead. With eyes fixed on Jesus, the starter and fulfiller of the faith, who, for the joy that was set before him, suffered the cross, ignored its reproach, and sat down at the right hand of the throne of God…” (Hebrews 12.1-4). He speaks of the joy that is set before Him. But what was His joy? That we, the lost sheep, were together with Him, the Good Shepherd. We, convinced that He loves us, returning in repentance to the stable and wanting to be with Him. And having this joy before Him, He went to the Cross, thinking that we would humble ourselves, and that we would desire to be with Him in His Father’s Kingdom.

The Holy Fathers also viewed the Cross as a path. St. Isaac the Syrian says: “Throw yourself day and night before the Cross of Christ and then the sun will rise in you and you will become like a paradise in flourish.” When it hurts, let me think of Christ on the Cross. We take the Cross of the Savior in our arms and ask from Him the strength to carry it. Therefore, the Cross is a path to God, but also to our own heart and to that of our neighbor. The poet Ioan Alexandru depicts this very beautifully in a poem about Saint Stefan the Great: “To enter the heart of a people / The narrowest gate of all / If you are not sacrificed in their tears / You have no way to enter eternity” (Testament of Stefan the Great).

The Cross also leads us to humility. Father Zacharias says, “How can the Lord be glorified if His faithful servants do not suffer? One way in which man humbles himself is to surrender completely to God’s providence.” To understand this, it is enough to consider what happened during the communist prisons. Wasn’t God’s power there? How else could one have resisted? God was glorified through those people. Therefore, it is a paradoxical language, but a Christian language. More specifically, Father Zacharias shows how we can bear our cross: “Man can bear the Lord’s death through the ascetic practices of the Church, such as fasting and enduring shame in Confession. Likewise, when a man humbles himself before his brother without claiming his own righteousness, instead claiming responsibility even for his neighbor’s mistakes without murmuring, he puts his own ‘dignity’ to death. But at the same time, he knows that ‘he has passed from death into life’ (John 5.24). He who cuts off his own will before his brother overcomes death. All who follow the Lamb are tireless bearers of the ‘death of the Lord Jesus,’ and this not only from time to time, but ‘like the lambs that are led to the slaughter,’ they are ‘slain all day long’ (Ps. 43:24), always and everywhere.” Behold several ways to carry the Cross. And just as many ways to be alive in God. Because this is the fruit of the Cross: our resurrection.

God makes Himself known in everything we do