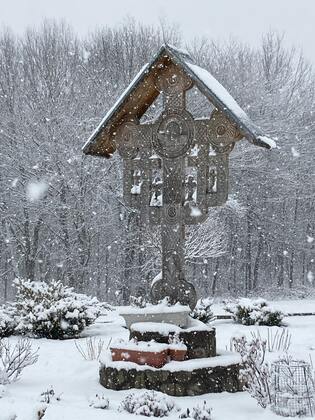 On the Sunday after the Baptism of the Lord, the Theophany that sanctified the waters, the Gospel recounted for us the beginning of the Savior’s preaching: “From that time Jesus began to preach and to say, ‘Repent, for the kingdom of heaven is at hand’” (Matthew 4.17). Similarly, the Epistle, from Ephesians 4.7-13, says: “But to each one of us grace was given according to the measure of Christ’s gift. Therefore He says: ‘When He ascended on high, He led captivity captive, and gave gifts to men.’ Now this, ‘He ascended’—what does it mean but that He also first descended into the lower parts of the earth? He who descended is also the One who ascended far above all the heavens, that He might fill all things. And He Himself gave some to be apostles, some prophets, some evangelists, and some pastors and teachers, for the equipping of the saints for the work of ministry, for the edifying of the body of Christ, till we all come to the unity of the faith and of the knowledge of the Son of God, to a perfect man, to the measure of the stature of the fullness of Christ.”

In the first few verses of the Epistle reading, the Savior’s economy is presented concisely. Through everything that He did – the Cross, death, and then ascension – He ascended on high. He ascended on high and gave us grace. Through the Savior, through all His work, the Holy Spirit was given to us and each has his own grace, his own gift. The idea that we wish to emphasize is this: “Now this, ‘He ascended’—what does it mean but that He also first descended into the lower parts of the earth?” The Holy Fathers say that the Savior, being God, did not remain in heaven and simply say to us, “figure it out.” Rather, He descended into the depths of hell. And the Savior, the Messiah, the Son of God incarnate, filled all things with His presence, such that each person is just as close to Him as anyone else. Not because we raised ourselves to Him, but because He descended to us. Thus, all of us, regardless of how holy or how sinful we might be, are equally close to Him in this sense, for there is no place that He did not fill with His presence. He lived the fullness of hell, of suffering, of hatred, of mockery, and of rejection. There is no human suffering that He did not live Himself. There is no one on earth who is not close to the Savior.

If you like, we find ourselves in the same period as when the Savior came and news spread that a prophet had appeared and was walking about the Holy Land. Alas, now He walks about in the Church and we can encounter Him. Those who lived in that specific place could meet Him because He descended. Those of us alive today also have this great opportunity. God descended to us and even further down, so that we might meet Him. Just as the harlot at His feet, the publican, the good thief, the blind man, and others not recorded in the Gospel found out that the Messiah had come and desired to meet Him, likewise we find ourselves in the same situation now. He is equally close to each person, as long as that person cares enough to want to meet Him. The Savior rejects no one. He does not set standards, there is no bar, no demand, no requirement for us to be able to meet Him.

In the present moment, we can all meet Him if we examine ourselves. How exactly? How do we begin? Exactly what today’s Gospel says – “Repent!” What does this “Repent!” mean? It means, “come to your senses and recognize that you are not on the right path.” In the Old Testament, there was the word בוש (“shuv”), which means “return,” because they had received the Law from Moses, but fell from the height of performing its works. For this reason, repentance was a return to that which they knew that had to do. For us, repentance has broadened in scope to include compunction for our sins.

In any case, repentance is truth, a coming to our senses. It is to realize that I am a sinner and it is pointless to say that I am good and holy when the reality is that I am filthy and unclean. Yet healing without truth is impossible. Thus, the Savior says, “I did not come for the righteous, but for the sinners” (cf. Mark 2.17). We know from Scripture that we are all sinners (cf. 1 John 1.8). The Savior effectively says this: “I did not come for those who deem themselves righteous, but for those who deem themselves sinful, as they indeed are.” So, God cannot heal us if we don’t recognize that we have a problem. If we say we are doing well, then God leaves us as we are, just as He did the Pharisees. What could he do for them? They were full of themselves, no more room to spare.

So, God is equally close to every person, whether he be the greatest saint or the greatest sinner. Not due to man, but to God Who descended to such depths and filled everything with His presence. There is no place that a person may find himself that is inaccessible to God. Our conversation starter with Him is this: “Repent!”. “Lord, I have a problem, I don’t have peace,” or, “I have too much fear,” etc. Each of us has some symptom that surely reveals the illness of sin that afflicts us. “Lord, I don’t want this. Help me, enlighten me!” We can begin a dialogue with God and He hears us. The Holy Fathers say that there is no prayer that God does not hear, even if we feel like it went unheard.

Therefore, it is essential for us that God descended to the depths of the earth, all the way to hell, and filled everything with His presence. He is as accessible now as when He was on earth. And it is our responsibility to enter into communion with Him and to partake of His grace. Repentance achieves this. And the end goal is for everyone to be encompassed in the unity of the faith, to the degree of perfection, which is to consider one another as members of the same body. For example, the Holy Fathers say that before the Fall, Adam treated his wife as “Bone of my bones and flesh of my flesh” (cf. Genesis 2.23). After the Fall, however, he treats his wife as something foreign, “The woman whom You gave to be with me” (Genesis 3.12). Thus, sin brings about discord. I no longer consider my neighbor as someone who belongs to me, but as a stranger who is to blame for the various troubles that afflict me.

We begin with repentance and, as Saint Paul says at the end of today’s Epistle, we attain unto the unity of faith, as a member of Christ’s Body. And we begin to treat the other as someone who is ours, not as a stranger. The fondness with which a mother looks upon her child is the fondness we are called to feel for all the other members of the Church, without judging them any longer. This is the measure of spiritual health; this is our calling. Grant this, O Lord!

The Freedom to be Anonymous