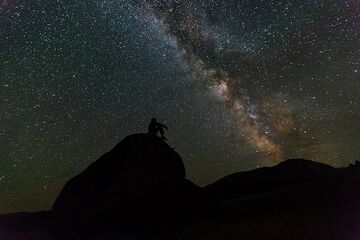 Globalization means, from a certain perspective, the disappearance of small cultures in favor of a grandiose one meant to honor humanity in the future confrontation with, possibly, galactic civilizations. Because man, in his dynamism, cannot stop only on his own self and his world, he “smartly” dreams of space transcendence and, eventually, the transcendence of time. Is this about an identity crisis? Is it perhaps a super-identity crisis? Or is it just confusion in finding the motivations that generate art and define the condition of the artist?

But practice shows that within universality, small cultures grow ever smaller, and large cultures tyrannically impose their value and values. The history of the world replaces that of a nation. The citizen is in the center of the world yet nowhere. A kind of paranoia dominates the public act, and public discourse is addressed to the citizen of the world and less to the individual with first and last names, everyday problems, feelings consumed in the greatest of anonymity.

The master puppeteer no longer uses dolls but people because he has a choice—he is offered a multitude. In the battle with the angel man was victorious; the vulgarization of life is the final gain, a gain with which the individual no longer knows what to do. The mystery which has enlivened man’s imagination for thousands of years has so many answers that the questions of the individual lose their meaning. Even the mystery of the “eternal feminine,” birth, life, conception of the universe, combination of a flower’s color and perfume—absolutely all these have their answers. They are proffered anywhere and by anyone: the media, specialists, politicians, friends, enemies. The world is an enormous concert of answers. In manifold voices, one more seductive than the next.

And if you have no more questions to all those answers already offered to you, you are lost. Because everyone—at all levels, on all channels, by all means—gives you answers. The only one still asking questions in this world is the artist. He asks them of heaven, earth, time, history, himself; he asks them directly, indirectly. But who cares about questions when the answers are ready and given with so much breadth, so much solicitude? What is the artist to do with his questions in this extremely seductive, attractive concert of answers? He retreats in the narrow, confined space of the place wherein the barely whispered question echoes yet again.

In the beginning was the culture of the tribe with its wonders, its astonishments, its fears, its limits. We have reached, it seems, the same point. We return to the local culture aspiring slowly, timidly to the national one and—why not?—after a while, strugglingly, to universality once more.

The Nativity of the Mother of God