I don’t think I exaggerate by confessing that the moment I first read—at the age of 14–15—about the Putna celebration from 150 years ago was a defining moment in my formation. Because it was not only about the emotion of the teenager in front of the moving resuscitation of the national feeling around the anniversary of Putna Monastery and the name of Stephen the Great, but also—and especially—that everything had happened then on Eminescu’s initiative. 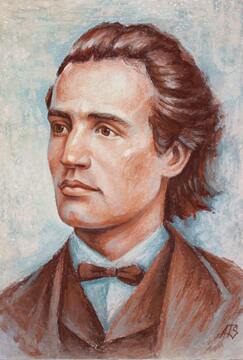 I was composing lyrics before I learned to write—no one asked me what I wanted to do when I grew up because everyone knew—and I was starting to know that myself. Yet while I knew that I would write, I did not how I would have to be as I wrote, what was to be the connection between my life—fixed in a time and a place among those of others before, after, and around me—and my own page, born of loneliness, detached from circumstances.

The discovery of the wonderful celebration organized by Eminescu and Slavici 150 years ago was for me the revelation—among so many other possible definitions—of the definition for the notion of writer toward which I was to strive, which I was to assume. A definition whose prototype Eminescu was.

It was then I understood he is our national poet not only because he is the greatest, but because he is the one who assumed, more than any other poet, the sufferings, hopes, and even the guilt of all; the one who agreed to hang on his wings struggling in flight, like a millstone, our collective destiny. Eminescu thus bound himself to us—as in a life sentence—and in so doing he bound us to him in his endless posterity. That was the moment I understood that being a Romanian poet—no matter how far in the world and in the future—meant not forgetting that this is the prototype. That he is the prototype.

Had Eminescu been less immaculate, I think it would have been easier for his posterity. Had there been in his life from beyond his pages the mysterious suspicion of a crime, as in Villon; or at least a guilty love, as in Shakespeare; or, even less, the defiance and uneasiness of artificial paradises, as in Baudelaire; or, the least of all, drowning in waves of alcohol, as with Poe; if there had been only one guilt in his life on earth, one thing that could be blamed on him and that could be generously forgiven, his posterity would have been easier to bear. If he, the greatest one, had lied, how simple would it have been to say, “Well, he lied as well”; if he, the greatest one, had stolen, how simple would it have been to say, “Well, he stole too”; if he, the greatest one, slung mud at others, how simple would it be to say, “He also slung mud.” But of all that a man can allow himself, he allowed himself only disease and dignity, thus forbidding, with his own collapsed body and dark mind, the entry of a shadow into the realm of Romanian poetry. With him and for an entire people the notion of poet remained linked definitively to that of the blamelessness. This unyielding law, perhaps gentler in other nations, mercilessly dictates our admirations and relentlessly establishes our idols, never allowing us the unworthiness of looking at his unparalleled stature and his large, open, sleepless eye on eternity. In front of him, it is easier for a blemished poet to stop calling himself a poet than for a villain to try to penetrate beyond the sanctified threshold of poetry.

I think—as I often did in essential circumstances when facts and sometimes even the meanings of my life depended on the answer I gave myself—how the Romanian people would have been without Eminescu. Not so much without his work, genetically brilliant and infinitely influential, but without his life, without his legend that set for us the coordinates of the ideal. How would we have been if Eminescu had had Arghezi’s life or Byron’s death? Lamartine’s career or Hugo’s longevity? Different—without a doubt—different. I am convinced that I am not exaggerating in claiming that the way of being of each of us depends miraculously, almost magically, on Eminescu’s biography. I do not claim that his spotlessness renders us cleaner, nor that his flawless dignity prevents us from humbling ourselves; I claim that the platinum standard of his morality established once and for all the supreme values ​​by which we know we will be judged. And this consciousness of continuous rapport to him sets for us the immutable laws of becoming, more severe than in other peoples.

When, in the early 1990s, a group of postmodern writers dedicated a special issue of a magazine to our parting with Eminescu, my astonishment was so great that I did not allow myself to revolt before seeking and discovering explanations for their collective reaction. I could not accept it was nothing else but a dandyism of change which—by rejecting the wooden language of the kitsch cult for “What shall I desire for thee, sweet Romania?”—rejected, foolishly and irresponsibly, the great victim of this cult. 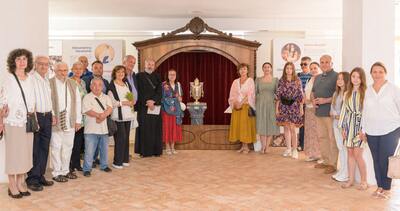 My explanation was that, in the beginning of all liberties—with which I did not suspect at the time we would not know what to do—the liberation from Eminescu was the refusal to carry on the burden of his intransigence and involvement; it was the fear of having to answer in everyone’s name for everything it was, and the cowardice of not daring to take on the construction of what it was supposed to be. Breaking away from Eminescu, they believed that they could break away from the definition of the Romanian poet he embodied, without realizing that this was the very definition of the Poet. Because, just as globalization does not mean erasing the characteristics of different peoples but harmonizing them in the world concert, universal literature is only the sum of the works of writers who succeed in truly belonging to their peoples. Eminescu is not only a great poet of the world, he is our national poet. From literature pages, he moves to the pages of prayer books and from the prayer lists with saints and martyrs to the dictionaries of universal history.

The question is not how the Romanian people would have been without Eminescu, because they simply would not have been. The question is how they could ever be without him.

And the answer is the same.

The Celebration of Putna 150. The Continuity of an Ideal and the Anniversary Student Congress

The Dormition of the Mother of God