All are yours, and you are Christ’s!

The Gospel on the ninth Sunday after Pentecost speaks about the Savior Christ’s walking on water and calming the storm. The account is from chapter 14 in the Gospel of Matthew. 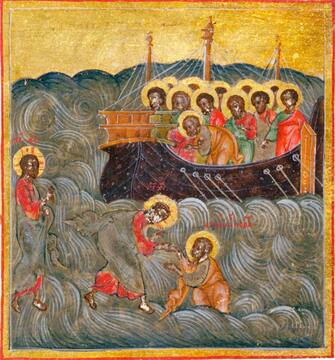 “Immediately Jesus made His disciples get into the boat and go before Him to the other side, while He sent the multitudes away” (22). And the Savior, after sending the multitudes away, went up on the mountain again by Himself “to pray. Now when evening came, He was alone there. But the boat was now in the middle of the sea, tossed by the waves, for the wind was contrary. Now in the fourth watch of the night Jesus went to them, walking on the sea. And when the disciples saw Him walking on the sea, they were troubled, saying, ‘It is a ghost.’ And they cried out for fear. But immediately Jesus spoke to them, saying ‘Be of good cheer! It is I; do not be afraid!’ And Peter answered Him and said, ‘Lord, if it is You, command me to come to You on the water.’ So He said, ‘Come.’ And when Peter had come down of the boat, he walked on the water to go to Jesus” (23–29).

This image of the Savior walking on water, beyond what is natural, is the image of the Gospel. Everything He told us, everything He brought us is above nature. It is not created. It is divine. It is akin to walking on water. And the significant thing is that, after Saint Peter saw Him, and the Lord assured him it was He and not a ghost, Saint Peter felt the urge to follow Him. It is the same with us. The Savior approaches us—through words, through our fathers in the Lord, through books, or other ways—and gives us the faith that we can follow Him. What we have here is a sort of a wordless call of St Peter. Because if he had not believed he could also do what the Savior did, he would not have asked it of the Savior; it did not occur to the other apostles to walk on the sea. But Peter had the impetus and the faith he could follow Him. That if the Savior was there—the One he knew well and saw every day, the true man—it meant he could do it as well.

So the Savior descended so far among us, into our world, becoming like us, that we may cling unto Him. He became like us to give us the faith and the impetus to be like Him. This is how the deification of man is accomplished. God became man, and we, following Him, become gods by grace. This is the dynamic of salvation. And this is seen in St Peter. He had the impetus; he thought it was possible. Later he saw what it truly means to walk on the sea, but what we have here is that initial impulse. The important thing is he thought it possible. If the Savior is there, I can do it! This is very important, and it is true. As it happened.

It is true the Gospel is above nature, divine, but it can be fulfilled. We believe at first also, only, like St Peter, we later lose this faith and sink. But the important thing is that the Gospel is real, and we can fulfill it with the help of the Savior. And how? Looking only and only at Him. “But when he saw that the wind was boisterous, he was afraid; and beginning to sink, he cried out, saying, ‘Lord, save me.’” (30). The same happens to us—we have this initial faith and begin to lead a Christian life, but then come winds, temptations, oppositions, and we begin paying attention to them, losing sight of the Savior, who called us to Him. And we sink.

We want to emphasize this aspect of the fact that the Savior, through all that He is and told us, represents the walking on water, to which He calls us. But the walk to Him requires strong faith.

Let us take a closer look at today’s epistle. St Paul tells the Corinthians in the first Epistle, in chapter 3, “Whether (…) the world or life or death, or things present or things to come—all are yours. And you are Christ’s” (22–23). This is the consciousness that the Apostle desires for the Corinthians, that they belong to Christ.

This is the aspect of walking on water we want to highlight. How would it translate into our lives that we belong to Christ and what value does it have?

St Cyril of Jerusalem says, “Our Lord Jesus Christ, tying the band of unclean demons and shedding His blood for us, and thus offering His death and purity, makes us His own as people who no longer live our lives but His.” It is an extraordinarily important idea. The Savior redeemed us, paid the full price. We are His, we are accountable only to Him. Not the enemy! The enemy has no right over me, he has no right to hold me accountable. He throws me into sin and then he comes and says, “Look at what you did. You are despicable, an animal,” and all other sorts of things he likes to tell me. And I believe him and am afraid; I am afraid of God and I and flee from Him. This fear is sinful because it makes me run away from Him and not approach Him. Good fear draws me closer to Him, just as it did the harlot.

We are not bondservants to the enemy, but to Christ! We are His own. But now it is up to us to keep this faith and lead our lives as followers and beholders of Christ the Savior.

Let us strengthen this idea with some beautiful words from Father Arsenie Papacioc. He always spoke of this dignity of ours as sons of God: 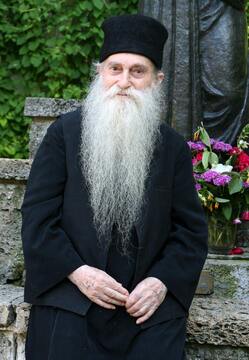 As for those who are the sons of God, I tried to tell as many people as possible about a position of spiritual strategy in our struggle with the one from without, the devil. His great helplessness over us is that we are and long to be with God. Do you see where our power lies? In this desire to be with God. It is the biggest weapon. The desire to be with Him.

The devil aims at this great goal: to separate us from God. He wants us to sink into the water and take our gaze off God, so he can lead us into the temptations he casts our way—the wind and all those at which St Peter looked and because of which he sank. When we no longer look to the Savior, but to temptation, we sink.

So the devil aims at this great goal, but knowing that he cannot accomplish it directly—because that is how so many martyrs came to be—he tries indirectly, through sin. He puts us in all kinds of sins and iniquities. And even if he succeeds, it does not mean that he has attained his great goal, but this plunges man into a great sorrow and makes him consider himself lost, as if he could no longer be forgiven. Being discouraged thus, he separates himself from God, and, behold, the goal of the enemy is reached. So we have sin, then sadness and discouragement, and then walking away of our own accord. No one can separate me from Him, not even sin. I do it on my own.

You ought not to bow your head and abdicate, no matter what and how great the sin is. Keep recognizing your merciful Master and know that no misfortune matters if you have unbreakable faith. This is what we wanted to underscore. The Savior walks on water and tacitly invites us to do it, as He made Peter believe he could, and scolds us if we do not reach Him. But we need unbreakable faith to go to Him.

As sinful as you are, God is truly very loving and, because you recognize Him, very merciful and forgiving. He alone will seek you, find you, embrace you, take you on His shoulders, bring you back into the fold, and love you more than the other sheep because you, in fact, did not leave Him.

This is a great spiritual position, which renders your great falls in life mere accidents. I recommend an endless joy within yourself because that confesses you are with Jesus Christ in your heart and in your breath. Your heart will always vibrate a wordless prayer. So, maintain a state of mastery and cheerful reassurance over yourself even if you are muddied, because whatever the reason for a disheartening sorrow may be, it is only from the devil.

This is the strategy of the sons of God. We ought to think like that even when we fall.

Let us keep this revelation with great holiness and unbreakable faith. The Lord, walking on water, calling us to do the same. We, struggling with evil in ourselves, in the world, and in everything that surrounds us, sinking but having unbreakable faith in the fact that He can make us walk on water.

May God help us all to behave like sons of God, for we are His! Amen!