In giving birth you preserved your virginity, in falling asleep you did not forsake the world, O Theotokos. You were translated to life, O Mother of Life, and by your prayers, you deliver our souls from death.

Your eminences, your graces, most reverend fathers, distinguished authorities, dear young participants in the Putna Celebration and the Youth Congress, beloved faithful; today, our Church celebrates the greatest feast of the Mother of God—namely, her Dormition. This holiday is replete with spiritual meanings. The Holy Scriptures say nothing about the Dormition because nothing was written about it, but the tradition of our Church evidences that the Mother of God passed to eternal life in Jerusalem, in her house, and was buried in the village of Gethsemane.

The teaching about the Dormition of the Blessed Virgin is more concentrated in the troparion of the Mother of God mentioned at the beginning: “In giving birth you preserved your virginity, in falling asleep you did not forsake the world, O Theotokos. You were translated to life, O Mother of Life, and by your prayers, you deliver our souls from death.” And the kontakion of this feast says, “Neither the tomb, nor death could hold the Theotokos, who is constant in prayer and our firm hope in her intercessions. For being the Mother of Life, she was translated to life by the One who dwelt in her virginal womb.”

The troparion and the kontakion summarize even better what the synaxarion says, that she fell asleep, meaning she passed through death but did not remain in the tomb. She did not remain in death; she did not know corruption. Why? Because the body of God the Word was formed from her body. The eternal Son of the heavenly Father, begotten eternally of the Father without a mother, was born as a man, but from the mother without a father. So she could not remain in the grave and know the corruption or corruptibility of the body from which God the Word incarnated. That is why both the synaxarion and the kontakion say that she was translated to heavenly life. First her soul—when the soul was separated from the body—and soon thereafter her body was also moved to the heavenly life, next to her Son. It is a great mystery because this move to her Son, to the dead and risen Christ, is called neither resurrection nor ascension, but “translation.” It is a very precise term. So we are not talking about the ascension of the Mother of God to heaven, but about the translation of the Mother of God to heaven. And not just anywhere, but right beside her Son, in heavenly and eternal glory.

The synaxarion tells us that three days before her dormition, Christ told the Archangel Gabriel to “go and tell My mother that it is time to take her to Me.” Archangel Gabriel, who had told her in Nazareth that she would give birth to a son, also informed her she would be moved to heaven, to her Son. Therefore, the Mother of God gladly received this news, because she would go to eternal life with her Son. We see here that the Orthodox Church emphasizes the personal relationship of the Mother of God with her Son, Jesus Christ, and that what He followed in the salvific work of the world, she followed as well. Namely, the Savior Jesus Christ willingly accepted death. His death is not only a crime committed by the political and religious authorities of the time, but it is also a self-sacrifice. That is why He said, “I lay down My life that I may take it again. No one takes it from Me, but I lay it down of Myself. This commandment I received from My Father” (John 10.17–18). And when we venerate the icon of the Savior, we say, “We worship Thine immaculate icon, O Good One, asking the forgiveness of our failings, O Christ our God; for of Thine own will Thou wast well-pleased to ascend the Cross in the flesh, that Thou mightest deliver from slavery to the enemy those whom Thou hadst fashioned. Wherefore, we cry to Thee thankfully: Thou didst fill all things with joy, O our Savior, when Thou camest to save the world.”

Because the Savior Jesus Christ willingly received His saving death, the Mother of God also receives this transition from earthly life to heavenly life, willingly, joyfully. For, as the Savior Jesus Christ said on the cross before His death, “Father, into Your hands I commit my spirit,” now the Mother of God, at the moment of her repose, says, “Son, into your hands I commit my soul.”

In the icon called “Deisis” of the Last Judgment, the Savior appears on the throne of glory, as Judge of the living and the dead; the Mother of God is at His right hand; and St John the Baptist, the teacher of repentance, at His left, interceding for the salvation of the world. That is why, in the troparion of today’s feast, it is said at the end, “And by your prayers, you deliver our souls from death.” The Mother of God prays for us at the hour of our death and on the day of judgment—that is, as soon as man dies and is privately judged, and then on the day of universal judgment. So she always prays; she is the icon of the Church in prayer who receives the blessing of Christ in response to her prayer.

Before falling asleep, the Mother of God prayed for the strengthening and peace of the world; distributed her clothes to poor women; and died praying, giving her soul into the hands of her Son, as the icon shows. We see the angels in the background, honoring her with hymns and ready to take her to her Son in body as well, body that remained in the tomb for a short time, as we learn from synaxarion. Three days later, when Thomas came and wanted to see the tomb, he found it empty and only the shroud that had clothed the Mother of God was there as a testimony to the fact that she was translated to heaven in body as well. 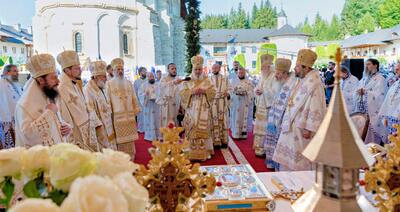 So this feast of the Mother of God shows us the wonderful work of our Lord Jesus Christ—His love for His mother from whom He took His human body. And at the same time, it shows us through the Mother of God as icon of the Church that the purpose of the Church on earth is to help people reach eternal, heavenly, incorruptible life. The Mother of God prays for everyone, but especially for virgins and mothers because she has always remained a virgin. And for mothers or families because she gave birth, nursed, and raised her Son, Jesus Christ. The Mother of God is also the protector of the clergy because her Son, Jesus Christ is the High Priest, or the eternal Hierarch. She is therefore the protector of bishops, priests, deacons, all people and especially the protector of widows, orphans, and all the afflicted. That is why Orthodox believers feel her motherly love. At the wedding in Cana of Galilee, she noticed that the wine was running out and asked her Son for help. And although the time of Jesus’ miracles had not yet arrived, at the request of His Mother, He turned water into wine, showing the blessing bestowed on the family by the presence of the Mother of God with her Son and the disciples. Therefore, at every wedding, Christ, the Mother of God, and His disciples, or servants of Christ, are invited to bless the new family. The Church also learned from the miracle in Cana of Galilee that the Mother of God is an invincible, unrejected, requited prayer. For this reason, no matter how long or short church services may be, they are always concluded with, “For the prayers of the Mother of God and of all the saints, Lord Jesus Christ, have mercy on us and save us.” Amen!

The Celebration of Putna 150. The Continuity of an Ideal and the Anniversary Student Congress