We are all awaiting Santa Claus, good old Saint Nicholas, to fill our stockings with presents on the eve of his feast or on the morning of December 6th. He comes to us, but do we follow him?

St Nicholas, in two instances, saved three people who were unjustly sentenced to death. What could we do in this direction? 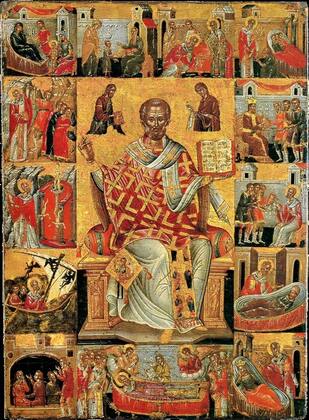 Few of us know someone wrongfully imprisoned, but we can all easily find those who suffer, without being guilty, for their imprisoned kin. Their loved ones, who lean on them for support: family members in general, but perhaps most of all, their children. Children are not guilty of their imprisoned parents’ wrongdoings, but they are deprived of the opportunity to play with them, to feel they have an adult in their lives who loves them, protects them, helps them grow. And we know they suffer most of all during the holidays: on birthdays and name days, Christmas, and Pascha, on the feast of St Nicholas, when their stockings remain empty. But any problem in this world, even if it may never be solved once and for all, has solutions in specific cases—that is, although there will always be parents who go to jail for their mistakes, some things can even improve at least partially for their children. In the United States, there are organizations that collect gifts and offer them to inmates, so that they can send them to their children for Christmas.

Those who organize such projects must be sensible people who know how to separate good from evil, who do not grow naive about evil when doing good deeds.

Another good deed of St Nicholas, which ought to be emulated much more today, is the almsgiving by which he saved the three young women from fornication. He secretly tossed a bag of money into the house of a father who, because he lacked dowries for his three daughters, intended to have them sell their bodies to earn a living.

St Nicholas knew that what was to happen would have been a grave sin, something that would have destroyed both the body, by sickness, and soul of those young women—for sin destroys man and renders him opaque both to the grace of the life-giving Holy Spirit and to a loving relationship with his peers. The father of the young women knew this all too well, and although he loved his daughters—as we learn from the story and from his gratitude to St Nicholas—he failed to find a solution to the problem of poverty.

In our time, hundreds of thousands of young women in Romania and around 40 million women in the world live this drama, mostly because of poverty and other problems in their families. Just as St Nicholas helped the father of the three young women, there are many families that need help to remain united, to shun passions and addictions, and to be able to offer the children all that is needed materially and spiritually.

Just as St Nicholas gave his help, there are people and organizations that help in this regard today, though many more are needed. Yet they also must have something of the power of St Nicholas: balance, a living faith, and a humble love of fellow men or else they might try to take up too much upon themselves and they might also fall.

The world of St Nicholas we see in childhood—that in which we receive gifts and they bring us joy—is the world we are called to build within ourselves and around us as adults. We are called to receive God’s gifts—our talents, our vocations—and to work together with Him in fulfilling our purpose and our life in the earthly world. Through our work, we are to give to others the gifts of life here and the gifts of eternal life.

Man’s unity with God gives rise to man’s unity with other people, by which man understands the needs of others according to God’s thought. The poet Ioan Alexander, in a poem about St Stephen the Great, writes that he was “a sacrifice in the tears of his people.” To wit, St Stephen felt the needs of his people because he was close to God, who allowed him to feel their pain.

Giving God to men and giving people to God—these were the life and will of St Nicholas—and through them he earned, he received so much glory from God.

This is how Saint Nicholas lived. Let us we pray that he help us live likewise, to the best of our ability, so we may meet him in the Kingdom of Heaven, where he who made us rejoice during our childhood will help us rejoice in eternity. Amen.

The Peace of Christ