To our Beloved Clergy and Orthodox Christians,
grace, peace, and joy from Christ the Lord, and from us hierarchical blessings.

Your Nativity, O Christ our God,
has shone upon the world the Light of knowledge…
(Troparion of the Feast) 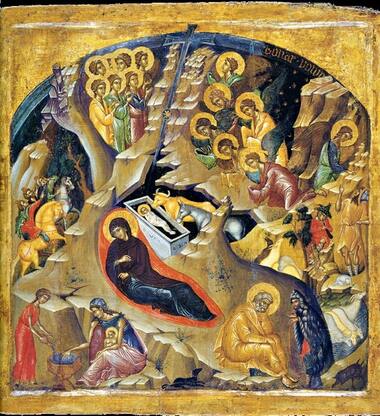 The Feast of the Lord’s Nativity is an occasion for proclaiming the news of God’s descent to humankind to bring them the understanding of their purpose and that of the universe. The joy of this proclamation is expressed in our carols, in the hymns of our holy services, calling us to take a pause from the world’s clamor and to reflect on the meaning of the sending of the Son of God to the earth for us and for our salvation.

The Troparion of the Lord’s Nativity speaks to us about the Light brought by the Son of God through the Incarnation:

Your Nativity, O Christ our God,
Has shone upon the world the Light of knowledge,
For by it, those who worshipped the stars
Were taught by a star to adore You, the Sun of Righteousness,
And to know You, the Orient from on high.
O Lord, glory to You!

On the first day of Creation God said, “Let there be light.” And there was light. And God saw the light, that it was good; and God divided the light from the darkness (Gen 1.3–4). God established light in the world He had created, light meaning order, the structuring of things according to the Creator’s plan, and the opportunity for man to understand this order. “God had made man… and had willed that he remain in incorruption,” St Athanasius the Great tells us. “But men, having turned from the contemplation of God to evil of their own devising, had come… under the law of death… and death had them completely under its dominion.”[1] The great Alexandrian father then shows us that the loss of the knowledge of God was causing them to return to non-existence, the loss of the possibility of reaching incorruption and of attaining the likeness of God, the One Who is.

But God did not leave man in the darkness of ignorance, for the Word Himself comes down, the Word being the prototype of man, and takes on our body “directly from a spotless, stainless virgin, without the agency of human father…. He, the Mighty One, the Artificer of all, Himself prepared this body in the virgin as a temple for Himself, and took it for His very own, as the instrument through which He was known and in which He dwelt… [and] through this union of the immortal Son of God with our human nature, all men were clothed with incorruption in the promise of the resurrection.”[2]

St Athanasius completes this explanation of the necessity of the Incarnation of the Word for the raising up of man from corruption with that of the regaining of the knowledge of the Creator: “Of what use is existence to the creature if it cannot know its Maker? How could men be reasonable beings if they had no knowledge of the Word and Reason of the Father, through Whom they had received their being? They would be no better than the beasts, had they no knowledge save of earthly things; and why should God have made them at all, if He had not intended them to know Him? But, in fact, the good God has given them a share in [the] Image [of] our Lord Jesus Christ, and has made even themselves after the same Image and Likeness… in order that through this gift… they may be able to perceive the Image Absolute, that is the Word Himself, and through Him to apprehend the Father; which knowledge of their Maker is for men the only really happy and blessed life.”[3]

The Lord’s Nativity acquires deep meaning through the words of St Athanasius, wonderfully revealing to us the love of God the Father, the Creator, who desires that we be restored to the knowledge of His divine mysteries through the Incarnation of the Son in Whose image we were created. This restoration of man is demonstrated in the Light of knowledge in which man once again partakes through the Birth of Christ from the Virgin Mary. And this light is the gift with which the Creator once again adorns man, who before Christ was lacking understanding. Out of this light of understanding springs forth grateful and joyful life.

St Leo the Great informs us, regarding this joy and gratitude: “For there is no proper place for sadness, when we keep the birthday of the Life, which destroys the fear of mortality and brings to us the joy of promised eternity. No one is kept from sharing in this happiness…. Let the saint exult in that he draws near to victory! Let the sinner be glad in that he is invited to pardon! Let the gentile take courage in that he is called to life!”[4]

Observing attentively our world permeated with suffering, fear, and so much misunderstanding, we find it similar to that of 2000 years ago when the Savior was born. The Bethlehem miracle brought to that world the hope that man can regain the countenance illuminated by the glory of God, that he could find the understanding of the meaning of the world and find the path of salvation that leads to God. For us and for our world Christ the Savior was born and has brought us the light of knowledge. Every Christian will find the answers to his own questions and will make wise choices for himself and his family by joyously receiving the news of salvation in Christ, Who said: “I am the light of the world. He who follows Me shall not walk in darkness, but have the light of life” (John 8.12). More than ever we understand, in these times of trial, that we need this light of life. For if the world doesn’t seek it and doesn’t desire to find answers to the acute questions of our times in accordance with this seeking, Christians can still receive it and can become illuminated,[5] that is, those who understand, who know about the way of the world, according to the example of the Magi from the East. They learned from a star to worship You, the Sun of Righteousness, and to know You, the Orient from on high. The Lord’s Nativity—the Troparion tells us—has the profound meaning of the knowledge of God Who reveals Himself to His creation, and of the separation of the Christian from the world of the darkness of ignorance of God!

With these understandings, I pray the One born in a manger to grant you health and growth in faith, the joy of the news of the Lord’s Nativity as a wellspring of light and understanding for your life! With a brotherly embrace in Christ the Lord, I wish you Happy Holidays and Many Years!

Your Brother in Prayer to God,
† Metropolitan NICOLAE

Chicago, The Feast of the Lord’s Nativity, 2021

[1] St Athanasius the Great, On the Incarnation, Ch I, (4) Fordham University e-text.

[4] St. Leo the Great, Sermon 21, On the Feast of the Nativity, NewAdvent.org/fathers

Tags: Word of the Metropolitan