My soul often found comfort in the parables of the Paterikon. Whenever I needed a word of encouragement, an example to follow, or perhaps just a breath of fresh air amid the daily commotion … A couple of lines in, and everything quietened, took on a different meaning. Or rather, it made sense!

But while it may not always be feasible to flip through the living pages of the Paterikon, God, in His great love, has given us people to fill ordinary days with life and holiness. And my thoughts take me not far, neither in time nor space, to the “ant,” as my grandmother called Aunt Ecaterina, who lived in the village of my childhood until February of this year, when she departed to the Lord. She was so small, so fragile, I expected somehow to glimpse her heart in her small chest. Because such a big heart was impossible to fit inconspicuously in a body like hers. She was a holy silence encompassed in a gentle smile. Life, with its good and bad alike, surrounded her large, bright eyes with deep grooves but never erased her smile. Later I understood her secret. She smiled because she believed! Old age arrived on her frail shoulders, but it did not bend her soul—only lifted it up. She had a strong faith, and that gave her the strength to overcome all lacks in life, and there were plenty. Although she could no longer hear well, that didn’t stop her from attending church every Sunday or feast day. She sat humbly in a corner, attentive—she couldn’t hear, but she felt it all. 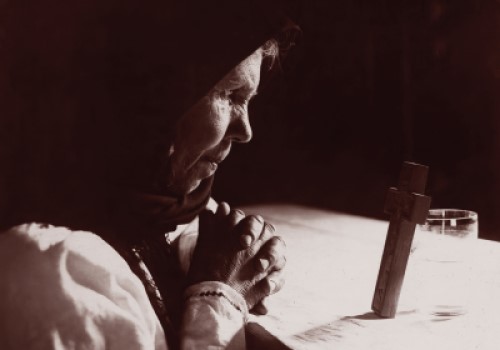 I learned about her faith in God a few years ago when one of her grandchildren died in a car accident. It was during Pascha, and he had just returned from abroad. To even touch on the wound opened then in his grandmother’s heart would be too much … the words are too poor, too empty. All I know is this: Her pain did not cry out; her pain did not ask God why. Instead, it kept flowing through the wrinkles encircling her eyes, dug out by life long before. A while later, she visited with my grandmother, and when the topic came to her grandson, I remember her saying that if that was God’s will, all she could do was pray he be saved. And she wept cleanly, humbly, without despair. Her bright eyes seemed then beacons befogged by tears. Behold a model of fully embracing His will!

And maybe this would be enough of an example to outline this Paterikon image because we all understand its hardship. But Auntie Ecaterina’s height continues. Seeing her always serene, content, I asked my grandmother about her life. Such peace, I thought, could only be the result of a tranquil life. But the story of the “ant” was far from the classic definition of peace. A few years later after getting married, voices in the village whispered her husband was cheating on her. Deeply saddened and hurt, but hoping it was not true, she decided to convince herself. And unfortunately, this time, the rumors were true. Asked by my grandmother what she did then, her answer was one from above: “I went home, I cried a lot, a lot, but ever since I assumed the role of a mute. I never said a word about it in my life.” All the pain nestled quietly in her heart, turning it an opportunity for sanctification. Surely, our modern thinking would condemn this position, which might seem as lacking in courage; but how many of us have the strength to hide our pain, instead of shouting it out and throwing it in the face of the one who hurt us?! When we suffer, we have two solutions, as a father used to say: We either crucify ourselves, or we crucify our fellow human. Aunt Ecaterina chose her own crucifixion without any second thoughts.

And her story goes on … Years after her husband died, when my grandmother, or maybe someone else tried to blame her husband for his misdeeds, she would quickly say: “Please, don’t say anything bad about him because he’s still alive. He lives in the bread I eat every day, because it is from his pension.” That was the only way she related to others. No matter what dishonest things someone did, maybe even a neighbor form her lane, her only answer was: “I don’t know anything, I haven’t seen anything.”

There it is! A Paterikon written on our native lands, with tears and nobility. What kind of heart did this woman have first to gather every wound in it without demanding an account, and then to be grateful to the one who hurt her?! It was this very adornment that rendered her so beautiful even during old age. I understand now! Faith, hope, love, forgiveness, patience. Now I understand why the whole village was at her funeral: Beautiful, hallowed people give off such a pleasant aroma that you always want to be around them—as my spiritual father puts it so beautifully. She had spread this aroma all her life and it seems even after …

Holiness seems difficult, far away, perhaps because we find it most often in books; but I believe that by affixing our heart’s eyes more often onto others and not just onto ourselves, we can discover a true Paterikon here and now, in the noise of contemporary life. And Aunt Ecaterina, the tiny old lady enlightening everyone’s heart with her smile and peace, who even at the age of 80 climbed trees to clean branches or reap fruit, remains for me a true image from the Paterikon!

The Cross: The Path to Salvation

On the Beginning of a New School Year