St Paul Epistle’s to the Romans was read in churches on the fourth Sunday after Pentecost. “Do you not know that to whom you present yourselves slaves to obey, you are that one’s slaves whom you obey, whether of sin leading to death, or of obedience leading to righteousness?” (6.16). We know from the Savior—who told the Jews that they were bondservants, and they said no, they were the sons of Abraham and never knew any bondage (cf. John 8.33)—that he who commits sin “is a slave of sin.” That is why the holy Apostle Paul says this. And he continues, “But God be thanked that though you were slaves of sin, yet you obeyed from the heart that form of doctrine to which you were delivered. And having been set free from sin, you became slaves of righteousness” (17–18). 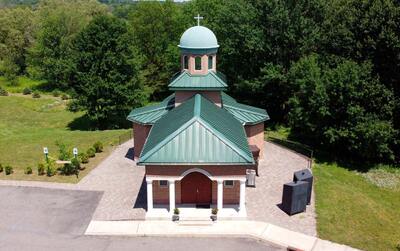 Here is an image: just as we were or are slaves to sin, so we must become slaves of God. We see how the bondage of sin manifests itself especially in a dependent man (and many of us have addictions). Something happens (a trigger, as the Americans say), for example a thought like, “I want to eat ice cream,” and I have no peace until I eat that ice cream. Or I want to watch a show, and I don’t have peace until I watch it. Or much more serious things. This is how we see we are slaves. The enemy rings the bell and we immediately “answer the call.” This shows how enslaved we are to sin. But the Apostle tells us that just as we are/were slaves of sin, so we must become slaves of God. In the words of the centurion in today’s Gospel, if God tell us, “Do this,” we do it. Not say we’ll do it tomorrow—we often hear during confession that people want to pray, but they postpone it and end up not doing it at all. Not like that. When God gives me the thought to pray, well then, I ought to pray. He says, “Go!” Well, I ought to go. He says, “Come!” Well, I ought to come (to church etc.). “Do this! Do prostrations! Do almsgiving!” I ought to do them. This means being slaves of God. Not “Meh, I’ll do it later.” If we do not immediately obey the command, it means we are not slaves!

St Paul continues, “I speak in human terms because of the weakness of your flesh. For just as you presented your members as slaves of uncleanness and of lawlessness leading to more lawlessness, so you now present your members as slaves of righteousness for holiness. For when you were slaves of sin, you were free in regard to righteousness. What fruit did you have then in the things of which you are now ashamed? For the end of those things is death” (19–21). Here we understand that it is very important to see whom we serve and what we get in return.

In general, being human is not easy. And it is never easy for man, whether he does evil or good. A wise man told me he heard a Russian father talking in a sermon about the hardships of Christians in the world, persecutions, and so on. And that father concluded by saying, “Being a Christian is hard. But it’s beautiful!” I personally do think so. On the other hand, being a sinner at first seems easy, but, really, it is not. Whether he commits sin or does good, in a sense, man will always find it hard. But the fruit of sin—for this the Apostle asks, “What fruit did you have?”—is death. Same hardship, yet you reap death. Here, when you take on the life in God, you take on the hardship of renouncing evil, of moving away from “the sin which easily ensnares us” (cf. Hebrews 12.1). It is a struggle with yourself, with the worldly spirit, and it is a cross. But the “cross means bearing that which you do not favor,” Father Arsenie Papacioc said. True, but its fruit is life!

We notice the fruits of the two ways beginning in this life. We see people who sinned or lived in pleasures, but their faces are sour, bitter. They themselves are withered by the heavy odor of sin. That is the odor of hell. And they reap it from this life. Conversely, the man who sacrificed himself, who did good deeds, as the centurion of today, has a bright face and reaps the grace of God. That is why St Paul asks, “What fruit did you have then,” and continues “[fruit] of which you are now ashamed? For the end of those is death. But now, having been set free from sin, and having become slaves of God, you have your fruit to holiness, and the end, everlasting life. For the wages of sin is death, but the gift of God is eternal life in Christ Jesus our Lord” (Romans 6.21–23).

These are the two ways. And we need to know whom we choose to obey. To whom we listen and whose slaves we are. Either sin or righteousness. Death or life. The choice is ours. They are both difficult. Although it seems at first that there is no hardship in sin, there is. And a lot of foul odor and heaviness for the soul. Depression, anxiety, and others. On the other hand, we have the cross that leads to life. It is the way of the Savior. It is not easy, but He and all the saints are our companions. This is the epistle of today: Let us become the servants of God to reap life everlasting. Amen!