I. “Be attentive to yourself, lest an unlawful word come to be hidden in your heart” [Deut 15.9]. We human beings are easily led toward sins of the mind. Therefore He who has formed our hearts individually, knowing that the greatest part of sin is accomplished in impulse through what is in our intention, has prescribed purity in our directive faculty as primary for us. For that by which we most readily sin was worthy of the most guarding and care.

II. God who is educating us has given us this great precept, that what comes to animals by nature, comes to us by the help of reason, and as they are set right without reflection, we may accomplish this through the attentive and continuous care of thoughts. And guarding strictly the resources given us by God, let us flee sin as the non-rational animals flee harmful foods but pursue justice as they pursue nourishing grass. So be attentive to yourself, that you may be able to distinguish what is harmful from what is healthful.

Be attentive to yourself, that is, observe yourself carefully from every side. Let the eye of your soul be sleepless to guard yourself.

III. Be attentive to yourself, that is, neither to what is yours nor to what is around you, but be attentive only to yourself. For we ourselves are one thing, and what is ours is another, and the things around us are another. Thus we are the soul and the mind, through which we have come into being according to the image of the Creator, but the body is ours and the sense perceptions through it, while around us are possessions, skills, and the other equipment of life. 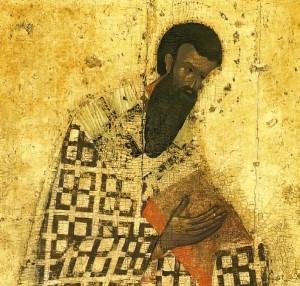 Look down on the flesh, for it is passing away; take care of the soul, for it is something immortal. Understand yourself with all exactness, that you may know what gift to apportion to each for the flesh nourishment and coverings, and for the soul doctrines of piety, education in courtesy, training in virtue, correction of passions.

IV. The same precept is both useful to the sick and very appropriate to the healthy.

Be attentive, then, to yourself, that you may also receive the aid of healing proportionate to your offense. If the sin is great and severe, you need many confessions, bitter tears, earnestness in vigils, continual fasting. If the transgression is light and tolerable, let the repentance be equal to it. Thus the same thing both heals the sick and makes perfect the healthy.

V. To yourself be attentive, it says, not taking nonexistent things for granted, but manage present things advantageously with a view to what takes place.

Do not spend time through thoughts scrutinizing the weakness that belongs to another, but be attentive to yourself, that is, turn the eye of your soul to inquire about things that belong to you.

Therefore do not cease examining yourself closely, to see whether life proceeds for you according to the commandments.

VI. First, then, you are a human being. Is this not enough to be reasonable grounds for the most exalted joy, that you have been entirely formed by the very hands of God who has made all things? That since you have come into being according to the image of the Creator you can ascend quickly toward equality of honor with the angels through good conduct?

VII. The exact comprehension of yourself also provides entirely sufficient guidance toward the concept of God. For if you are attentive to yourself, you will not need to trace your understanding of the Fashioner from the structure of the universe, but in yourself, as if in a kind of small ordered world, you will see the great wisdom of the Creator.

VIII. If you like, after your contemplation of the soul be attentive also to the structure of the body and marvel at how appropriate a dwelling for the rational soul the sovereign Fashioner has created. He has made the human being alone of the animals upright, that from his very form you may see that your life is akin to that on high (…) so as not to be devoted to the stomach or to the passions below the stomach but to direct his whole desire toward the journey on high. Therefore be attentive to yourself, that you may be attentive to God, to whom be glory and dominion unto the ages. Amen.

Sing in Your Hearts to the Lord!

Christ: Icon from Within our Heart