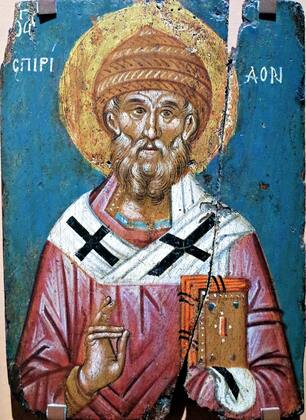 Holy Hierarch Spyridon, celebrated on December 12, was born of a simple and God-loving family on the island of Cyprus, around 270 A.D. He inherited the virtues of his parents from an early age, being gentle, humble, and faithful. He was a shepherd and had a wife and children. After his wife died, he dedicated his whole life to God, following His commandments. He attained a great spiritual height and was blessed by God with the gift of wonderworking. Later, he was appointed bishop of Tremithus. He passed to the Lord in 348. His holy relics are kept in the cathedral that bears his name on the island of Corfu, Greece.

Saint Spyridon never turns away from those who ask for his help, and he works his miracles even today. The saint is called the “Traveling Saint” because his holy relics wondrously leave the reliquary, and as a result his vestments and shoes become worn. They are replaced every year on December 12, the date of his celebration. Not only are the worn out shoes evidence of his presence among the faithful, but also the many testimonies of the miracles he performs in their lives. One of these beautiful wonders is presented below:

My name is Iuliana and I would like this miracle of Saint Spyridon be known because the saint really works miracles!

In the summer of 2003, my husband suffered a stroke. We woke up at 4 a.m. with his pillow soaked in blood… it wouldn’t stop. We went to Colentina Hospital. He underwent X-rays, and without any other check-ups, they diagnosed it as sinusitis. After two more days he couldn’t speak coherently, his right hand was numb, as was his right side. He was rushed to Bagdasar Arseni Hospital for investigations and tomography. The investigation revealed he had suffered a stroke and that only a miracle had caused the blood to flow out and not flood the brain. During this entire time, I kept going to Saint Spyridon’s Church, which was very dear to my heart. After three days of treatment, my husband recovered.

He left the hospital and kept telling me while he was in there, he dreamed of churches every night. I asked him to go with me to St Spyridon’s to thank the saint. But my husband came from a family of atheists and always said to me, “You go!” So I went and thanked St Spyridon the best I knew how. But the saint wanted my husband to go as well! Eight months passed, all good and beautiful, until one evening when my husband complained of severe headaches. We tried all kinds of treatments, but to no avail.

The next day we went to Colentina Hospital. He was checked and they discovered a hematoma that had been caused by another stroke. After that my husband went into a coma. I was crying and praying to St Spyridon to work another miracle, to help him once more. I placed some of my husband’s things on the saint’s reliquary every day, and my tears flowed, but I felt the saint’s power and it was fantastic. After a few more days, two or three perhaps, the doctors told me that if he ever recovered, we would have big problems. But… it wasn’t so.

One day, after leaving St Spyridon’s and heading to the Intensive Care Unit of Colentina Hospital, I felt better for the first time in three days. Once there, I saw doctors and nurses gathered at my husband’s bed. First, I thought the worst, but surprise! My husband had recovered, but he was confused, did not know where he was, and kept telling me he was in a church. I explained he was in the hospital and what had happened to him.

He remained in the hospital for three more weeks and then was discharged. As I was sitting next to him in the hospital one day, he told me about a dream he had had while in the coma. A dream that, although years have passed, still makes me tremble.

My husband was dreaming of his death. He saw a man driving a cart full of clay for making bricks to the cemetery. At one point, a “gentle bearded man” appeared and stopped the cart as it was about to enter the cemetery. He removed a mudbrick from the cart and put it down, saying, “Not yet for this one,” and the mudbrick took the form of my husband. (This dream frightened my husband badly and marked him for many years.)

The three weeks in the hospital were over and it was time to leave. That dream made me feel that St Spyridon had performed a miracle to give my husband a second chance. When we got in the car, he said, “Let’s go to the church where you pray!”

At that time, a large icon of St Spyridon was on one of the front pillars. Right as he entered, my husband started shouting, “That’s him! That’s him!” I understood then that the man who had taken the mudbrick from the cart was St Spyridon. My husband began to believe in miracles and started to attend church services. Although years have passed since, I must thank Saint Spyridon from the bottom of my heart for everything he does for us!

Diffidence in Our Relationship with God