On Saturday, June 12, 2021, the monastery dedicated to St. Demetrius the New celebrated its summer feast day: Ascension of the Lord. The joy of this great feast began on the prior evening, with the service of Great Vespers with Litya, and continued the following day with the services of Matins and Divine Liturgy, which was celebrated by His Eminence Metropolitan Nicolae together with 8 priests and a deacon. Just as in previous years, the founders and benefactors of the monastery who have already reposed in the Lord were not forgotten, but rather were commemorated at the memorial service that followed the Divine Liturgy. The grace of this beautiful feast was shared with a large assembly of faithful, some of which joyfully donned the Romanian national costume.

His Eminence Metropolitan Nicolae delivered a sermon on the Ascension, in which he recalled several interpretations of the feast. Among other things, His Eminence underscored that “Christ ascended to heaven so that He might help us ascend to heaven. Christ, being the Son of God and Himself God, descended to take on our body, our sick nature that was oriented towards the earth and had lost any contact with God, so that He might heal it. (…) The purpose of our life is the same: to ascend from earth to heaven, from death to life, from our many pursuits that tie us to this earth to those that lead us to heaven. The ultimate goal of our existence is not to put our body in the grave, but to ascend. This very goal of the Christian life is not something that we will only attain at some point in the distant future or at the end of the ages, and until then we remain here, tied to transient things. Rather, this is the goal of our life even now, in this very moment.” At the end of his sermon, His Eminence noted yet another reason for celebration and joy, namely, the 10-year anniversary of the consecration of the church. He also gave glory to God and thanked the faithful who had donated or otherwise helped the monastery, recalling also the various improvements to the monastery since then up until the present. Finally, His Eminence offered a gift to the faithful: an icon specially prepared for the Year of Homage for the Romanian Diaspora, which represents the icon “Mother of God from Guadalupe” (1534) together with the Holy Emperors Constantin and Helen, Saint Rafael of Brooklyn (the first Orthodox bishop ordained on American soil, 1905) and Saint George the Pilgrim (a 19th century Romanian pilgrim). Likewise, the brotherhood of the monastery offered an icon of the Mother of God “Sweet Kiss” to His Eminence.

During the festal meal, a short artistic program was organized. This began with three patriotic songs interpreted by a group of youth, who are members of the Romanian Orthodox Youth of the Americas (ROYA). Afterwards, the talented Ana Constantin played two pieces on violin by Romanian composers: “Balada” by Ciprian Porumbescu and “Romanian Rhapsody” by George Enescu. Ana’s virtuous performance was congratulated by a standing ovation and brought tears to many people’s eyes. The program finished with two Romanian songs interpreted by the children’s choir from St. Nicholas Church in Queens, NY.

The blessing of the Lord was immanently present: in the perfect weather, in the multitude of pilgrims, and in the joy that flooded many people’s hearts and filled the air. We thank God for all things! 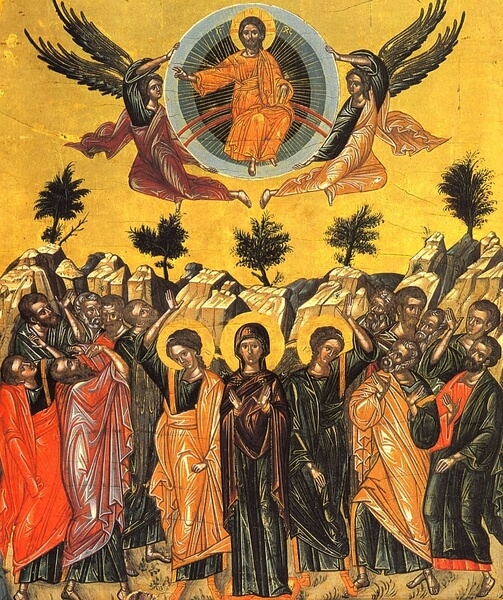