The reunion and service with the hierarchs of the other Orthodox Churches in Bucharest that autumn were the culmination of almost 30 years of struggle to preserve the canonicity of the diocese he shepherded and the most beautiful and uplifting moment in the entire career of Archbishop Victorin.

Yet all the difficulties encountered during those years left their mark on ROAA’s life, especially on its administration. Under the weight of time, the administrative activity of the diocese suffered greatly. Father himself said that until each parish had its own church, he would not take care of the residence of the Archdiocese, which by the end of his life had become almost uninhabitable. In addition to these circumstances, the lack of an effective diocesan chancellery and not having a vicar-bishop to get involved in pastoral-missionary activities in the vast North American territory led his close collaborators to ask for a vicar for the Archdiocese. Archbishop Victorin did not agree with this proposal, trusting only in his lifelong collaborator, Archimandrite Vasile Vasilachi, but who was three years his senior. This tension between the need for administrative renewal and Archbishop Victorin’s age determined an ROAA clerical delegation to address directly the Holy Synod of the Romanian Orthodox Church in 2000 to ensure the succession of the Archdiocese. Thus, in the plenary meeting of February 19–20, 2001, the Holy Synod approved Archbishop Victorin’s withdrawal, after previously recommending it, from the archbishop’s seat on February 22, 2001. As of that date, the ROAA archbishop’s seat was declared vacant. Archbishop Victorin stated: “I will submit to the decisions of the Holy Synod.”

His withdrawal from the seat was the last drop in the glass of bitterness. He celebrated his last Liturgy on Sunday, June 24, 2001, on the Feast of the Nativity of St. John the Baptist, at St. Andrew’s Church in Mississauga, Ontario, Canada. On Thursday, June 28, 2001, following a myocardial infarction, Archbishop Victorin was hospitalized at St. John’s Roman Catholic Hospital in Detroit where he fell asleep in the Lord on Monday, July 16, at 9:30 a.m.

According to his wish, the casket was transported to Romania to be buried at Putna Monastery, where it arrived on Saturday night. Contrary to international rules, the coffin was unsealed (almost six days had passed since his repose) and laid in the monastery church for burial rites. Not only were there no signs of degradation, but we also have the record of a pious elderly woman who exclaimed: “He is so beautiful! Will you still put him in the ground?” Many monks also testify to the inexplicable feeling of joy they had when they were near the coffin. There are testimonies of local people who sensed a fragrant scent from the venerable archbishop’s coffin.

The Holy Liturgy of the next day, Sunday, July 22, was celebrated by His Eminence Iosif, Romanian Archbishop of Western and Southern Europe and Deputy of ROAA; Metropolitan Bartolomeu of Cluj; Archbishop Pimen of Suceava and Rădăuți; Bishop Ioachim of Huși; and Bishop Gherasim of Putna. From the eve of the funeral and up until the placing of the coffin in the tomb, it seemed that the nature participated in the burial service—at times the sky darkened, pouring torrents of water, with thunders and lightening flashing from above; at times the clouds parted, and it cleared up—for the one who was an outsider, wanderer and traveler all his life; who embodied meekness, humility, and simplicity; and who left behind a great void with his departure. 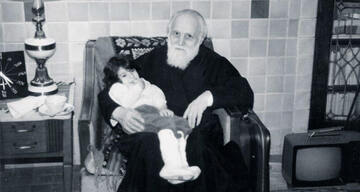 At the end of this brief biography included in the pages of our bulletin, we reproduce a fragment from Metropolitan Bartolomeu Anania’s panegyric. In the following issues of the bulletin, with God’s help we hope to present several testimonies of some people who, similarly to Metropolitan Bartolomeu, attest to Archbishop Victorin Ursache’s holiness.

“Every departure resembles a death. Every death resembles a separation. Every separation is accompanied by sorrow. All the more so when the departure is forever. It is fitting that we should be saddened today next to the earthly remains of His Eminence Archbishop Victorin. But spiritually we feel the joy of his ascension to heaven, where his disciple, Saint John Jacob of Chozeba, awaits him, and higher still, the Lord Jesus Christ expects him with open arms. And why should it be so? Because Archbishop Victorin was a monk with a choice life, with a pure life, with a holy life.

“I give you this testimony as one who was his close collaborator for ten years, between April 1966, when he became a hierarch, an archbishop in America; and until October 1976, when I had to leave the United States of America. In those ten years we lived in the same house, we ate at the same table, we shared the joys and the bitterness. And I realized that when it came to his becoming a bishop of the Romanians in America, the dilemma was the following: whether he was to adopt the political criterion or the canonical one. And on that, Victorin did not dither. Whatever politics is, it is human; governments come and go. We must keep high the flag of the Church’s canonicality, the connection with the mother Church, the connection with the Holy Synod, with all our ancestors, with our homeland, with our history and traditions.

“Of his pure life we already spoke. Although he had a bishop’s crown on his head, he remained the same monk from Neamț with his prayer rules, his fasting, his ascetic striving, and his all-night vigils. And all that was said here was well said. Before becoming a steward, he was a missionary par excellence, traveling the continent far and wide by thousands, and tens, and hundreds of thousands of miles.”

The Ethics of Memory

Through Humility and Humble Mindedness, Let Us Draw Closer to God