The second Sunday of the Great Lent is dedicated to Saint Gregory Palamas. St. Gregory publicly defended the tradition of prayer from the Holy Mountain, the hesychast tradition of the Jesus Prayer: “Lord Jesus Christ, Son of God, have mercy on me, the sinner.” And there were certain practices that went along with the prayer: for example, the fathers sat on a stool, perhaps hunched over, and focused their mind, trying to stay it pointedly either over the heart or the navel to prevent it from wandering. So this ascetic striving, this prayer, involves some bodily features as well through the concentration of the mind and the outward positioning of the body. It was this particular aspect that was ridiculed by a certain Calabrian monk, Barlaam.

In the dispute between the two, we have a difference between the correct, orthodox spirit of understanding matters according to the work of the Savior; and the spirit of ancient philosophy or pagan spirituality. The great problem in our daily practice is—and that is why we are now fasting—bodily restraint. Various spiritualities, followed later by philosophies such as Platonism and others, have always seen evil in the body. Plato posited that the body is a prison for the spirit. But this is a misunderstanding of both the problem and its solution. Because, as St. Gregory Palamas says: “We have not been taught to think that the body is bad, because God made it good; it is the fleshly thought that is bad.” The Savior did not come to throw away, to abolish what is not good but to transfigure and cleanse what we have and sanctify it. And He did so, first in His body. The Cross and all His acts were for this purpose: He sanctified His human nature. This is our asceticism. We cleanse ourselves. We do not amputate the body to rid ourselves of the problem. No! So how do we do it? Through the body, which helps us to cleanse it along with the soul.

St. Gregory Palamas claims that, paradoxically, man is more God-like than the angels precisely because of the body. For God made the human soul of mind (nous), reason (logos), and spirit (pneuma) in the image of the Holy Trinity: the Mind-God the Father who begets the Word-Logos and from whom the Spirit-Pneuma proceeds. “Then the eyes of the angels beheld the human soul … as another god … engraced by God … according to the divine image and likeness as a fully unitary being in mind, reason, and spirit.” St. Gregory also adds that the angels have the three components as well, but a more atrophied spirit, precisely because they have no body. This is because the rational soul of man, being built together with the earthy body, received from God the creative spirit of life through which it holds together and makes alive the body united with it: “The noetic and intelligent nature of the human soul has received a life-generating spirit from God since the soul is created together with an earthy body, and so by means of the spirit sustains and quickens the body conjoined to it.” This nature, which the incorporeal ones are lacking, was created in God’s likeness by Him. How paradoxical! So, for us humans, everything is valuable: both the soul and the body. It is not possible to be a real person without a body. In particular, this evinces the fundamental delusion of the belief in reincarnation.

From this correct understanding of man’s composition springs the principle of Christian asceticism: “It is evident to all that we have been commanded to crucify the flesh with its passions and desires” (cf. Galatians 5.24), but not to kill ourselves and thereby kill the entire work of the body and the power of the soul. On the one hand, to free ourselves from desires and evil deeds and flee from them irreversibly, and, on the other, to become men of the desires of the Spirit, like Daniel (cf. Daniel 5.23). And the saint adds, “We have not been taught that dispassion,” meaning perfection, escape from passions, “is the mortification of the passionate faculty” because we do have in us something that feels, we are sentient people, and for this reason we attach ourselves to one another and, regrettably, to things, matter, and even evil by following the mindset of the flesh. But dispassion “is an activity habitually directed toward the divine, entirely turning away from what is evil and toward what is good.” 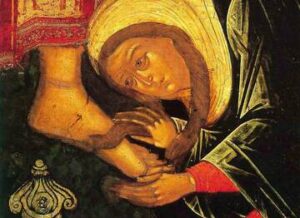 As for the directing of the soul’s passionate side toward God—that is, its transfiguration as a means of asceticism and gaining dispassion—Saint Gregory says, “The passionate faculty is not mortified by ascesis, but by being advanced to a God-loving work, it reaps the salvific piercing and joyful weeping that engender the bath of forgiveness, the renewal of the birth in God—to wit, the tears of repentance.” The passionate faculty, if we turn it to God, brings forth tears of repentance in us. And he continues, “These God-loving and useful tears give wings to prayer, enlighten the eyes of the mind, and preserve grace, bringing it back if it is lost. But these cleansing tears that seize from the earthly, lifting and uniting him who sheds them with the grace of birth in God, and thereby deifying him—are they not a common work of the body and of the passionate side of the soul?” So the tears are bodily, but they are also born of the soul. This is the correct understanding of Orthodox asceticism which involves both the body and the soul. Together we go to God; together, body and soul, we are cleansed through the tears of repentance!

Archbishop Victorin Ursache: A Saint among Us (V)

What Does It Mean for Me to Become a Christian?