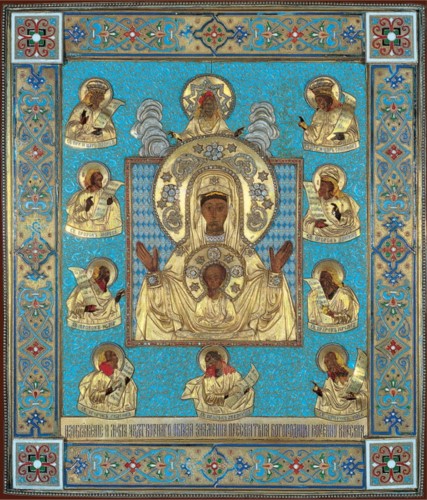 The miracle-working Kursk Root Icon of the Mother of God will visit St. Dumitru Monastery on Saturday, October 23, for the monastery’s patronal feast. His Grace Bishop Nicholas of Manhattan, Vicar Bishop of the Eastern American Diocese of ROCOR, will accompany the Icon and will concelebrate the Divine Liturgy together with His Eminence Metropolitan Nicolae.

Troparion of the Icon (Tone 4)

Having acquired thee as an unassailable rampart and a fount of miracles, we, thy servants, set at naught armies of adversaries, O most pure Theotokos. Wherefore, we entreat thee: Grant peace to our native land and great mercy to our souls.

Brief History of the Icon

On 8 September 1295, on the day of the Nativity of the Most-Holy Mother of God, a small group of hunters from Rylsk came to hunt at the Tuskora river about 18 miles from Kursk. One of the hunters, an honorable and pious man, seeking prey in the woods, found a small Icon lying face down on the root of a tree. He had barely lifted it to inspect it when the spot upon which the Icon lay burst out with a strong spring of pure water. The hunter who found the Icon knew that this was no ordinary occurrence. He called his companions and together they built a small wooden chapel, in which they placed this Icon. The residents of Rylsk, hearing of the newly appeared Icon of the Mother of God, began to visit it for veneration, and many miracles began to be associated with it.

In 1385 the Kursk region was swept by the Tatars. They tried to burn down the chapel and its Icon, but the wooden structure would not burn. The priest who served in the chapel, Fr. Bogolep, explained to them that the reason for this miracle was the Icon itself. The angry Tatars hacked the Icon in half, tossed the pieces in different directions, and then burned down the chapel. Afterwards, they took Fr. Bogolep prisoner and forced him to tend to their flocks. Eventually, he was ransomed by emissaries of the Muscovite Grand Duke and thus returned to the place where the chapel had stood. After a long search, while praying and fasting, he found both halves of the holy Icon, placed them side by side, and they grew together almost seamlessly.

In 1769, the future St. Seraphim of Sarov, who was then 10 years old, became deathly ill. One night, he saw a vision of the Mother of God in his sleep, and several days later the Kursk Root Icon was carried in procession through his village and passed right by his home. His mother lifted her young boy and took him outside to venerate the Icon, and afterwards he recovered rapidly. As a result, St. Seraphim had great love for the Mother of God throughout his life, and was made worthy to see her many times in visions.

On the night of 7-8 March 1898, atheist revolutionaries tried to blow up the miracle-working Icon and the cathedral where it was located with a bomb, but the Lord Jesus Christ glorified His Most-Pure Mother yet more, for despite the terrifying destruction in the cathedral, the Icon itself remained untouched.

In the aftermath of the Bolshevik Revolution, the Icon was taken to Serbia, where it remained until 1944 when, together with the ROCOR Synod of Bishops, it went abroad to Munich. Since 1957 the Icon had resided in the main cathedral of the Synod of Bishops in New York.

The Icon also has a special connection with St. John Maximovitch of Shanghai and San Francisco. On 2 July 1966, St. John was accompanying the Icon on a pilgrimage to Seattle. After serving the Divine Liturgy, he remained in the altar for almost three hours, praying. Afterwards, he returned with the Icon to his guest room in the parish house, and about an hour later, a loud crash was heard. The other people in the house ran upstairs, saw that the saint had fallen on the floor, and lifted him up into an armchair, where he gave his soul peacefully to God in the presence of the Icon.

As the protectress of the entire Russian Orthodox diaspora, the holy Icon travels regularly to churches worldwide. It brings joy and consolation to many faithful, who await it with great reverence and fondness.