“Stephen sleeps and a nation dreams” are the words of George Tofan, the soul of the Putna Celebration of 1904. Today, we are participants and witnesses to one of those moments when hopes become reality—Romanians from all over the country and abroad gathered here, on the “classic land of Bukovina,” on the land of the founders of Moldavia, which guard the tomb of the Father of Moldavia.

Let us rejoice, but let us also fulfill the purpose for which we are here today.

What is the purpose of our gathering to follow in the footsteps of the students of 1871?

The Source of the Past—the Fervor of the Present—the Hopes of the Future—this is the axis along which man’s journey unfolds through history, a history that is not arbitrary but full of meaning because history is, as Mihai Eminescu so poetically portrayed it, “the unfolding of God’s thought.”

On the arrow of time, today’s celebration, August 15–16, 2021, is a point in the Romanian history. But this point does not stand alone, because it has a past and participates in the construction of the future. One hundred fifty years after the Celebration of 1871, we have the chance to contribute to the perpetuation toward the future of the ideal expressed by the students of that time: the unity of the people through cultural and moral unity.

In today’s world, those of us who are now in Putna are not alone: ​​either physically present, or listening, or watching from other places, together we are a part of the Romanian nation. Just as in 1871 Ciprian Porumbescu played to the “whole of Dacia” in front of 3,000 Romanians, so do we, in our hearts and thoughts, carry the whole of Romania and Romanians everywhere. (….) 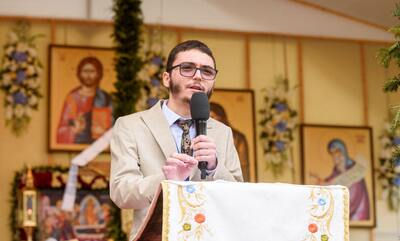 Today, at the anniversary hour, we are in Putna as in a school of patriotism, whose graduates we hope to be, following in the footsteps of the 1871 generation and those of Saint Stephen the Great.

And today, as yesterday, and the day before, Romania and Romanians face internal tensions, especially the tension between identity and integration. On the one hand, we feel the desire to belong to the Western world, but on the other hand, we feel that we cannot embrace some excesses, and we cannot live without those elements that gave confidence to our ancestors and which also give us a sense of life today.

The solution to this tension is not suppressing any of the feelings, because suppression leads to a subsequent violent backlash. The solution must be neither becoming someone else, nor isolating ourselves. This identity tension ought to be seen as a mission and an opportunity both for us, as Romanians, but also for the whole of Europe.

The solution of this tension should start from the inside, from the premise that “Romanianism should not be discussed, but affirmed.” The sense of nationality is the cause and the fundamental manifestation of the life of any nation, and the nation appears as a factor that brings together the freedom, dignity, identity, and memory of a people. An essential part of our identity as Romanians, but also as Eastern Europeans, is represented by the Christian faith, greatly Orthodox, which both under the Ottoman rule and during the communist regime, proved to be a guarantor of national identity and continuity that knew not to crush religious minorities.

As for the external manifestation, the Romanians have the vocation of synthesis between East and West. Only devotion to this creed can engender the “union of mind and heart” of which A. D. Xenopol also spoke in his 1871 speech.

So how do we do that? Here are two principles.

Because the organization of the 1871 Celebration started with Romanian students in Vienna who spoke German, allow me the following observation. The German term Leidenschaft translates as passion, devotion, dedication, but this word also has in its structure the verb leiden, which means to suffer, to endure, even to sacrifice. What I want to emphasize is that devotion to a certain principle, to certain values, ​​presupposes our willingness to suffer, to sacrifice ourselves in their name. The students of 1871 aimed for such devotion, and we must aim for it as well.

The second principle refers to avoiding the radicalization of the opinions by which the parts of a nation attack one other.

We live in a highly polarized society, and the radicalization—sometimes accidental, sometimes unconscious, and sometimes conscious of the supporters of currents, whether right or left, conservatism or progressivism—leads to the undermining of an essential element in the configuration of any state: national unity.

Stephen the Great succeeded in fighting against the military empires of the time because he succeeded to unify the people spiritually. Spiritual unity is even more needed today when cultural ideologies are confronted instead of military empires.

In 1871 and today, the most powerful weapon of a nation is culture. The outcome of the battle depends on each of us: not all of us have to give lectures about Stephen the Great, write books in Romanian, or publicly declare our pride to be Romanian, but every small gesture is important.

Here in the homeland, past experiences should be a guide and a tool for action in the present. Romania must be aware of its potential and then fight to achieve it by identifying needs and formulating ideas. This falls on the whole nation. About those at the top, Mihai Eminescu stated that they must translate into reality the ideas and needs of the people, not create new ones.

But every gesture made anywhere in Europe, from Nicosia to Reykjavik, and also on the other continents, is a step toward or against unity. That is why being Romanian at home and abroad is a daily challenge! Romania of the 21st century must actively participate in shaping the European project, (re)becoming an opinion leader and a main political-economic actor in the Central-Eastern European space.

I would like to end with four verses that belong to Ghe. Dem Teodorescu—the kind-hearted man from Bucharest who left the most extensive reports on the Putna Celebration—verses published in 1871 in the publication Românul (The Romanian):

“Go do your will, today you’re free,
Write and speak rightly what you know:
Tell Europe that which you once were,
What are you now, what you can be!”

We Are Christ’s Own