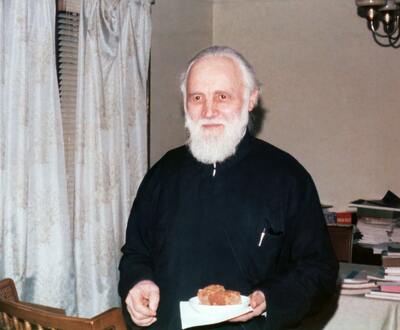 I believe that faith must be lived and not told, akin to the daily emotions of more than 30 years spent in the presence of His Eminence Victorin. Such a special person who lived in a completely different world, much better than this one, expressed in the serenity of his face and the peace, calm, contentment, and goodness of his soul.

The priests sent from the homeland to fill the vacant parishes in America made their first stop at the Archdiocese on their way from the airport. A few days later, a week perhaps, they went to their respective parishes.

My husband Gheorghe Alexe and I arrived in Detroit via Canada in 1971 for cultural activities at the Publications Department and had virtually no place to go. At the Archdiocese, His Eminence had no help of any kind. When a visitor rang the doorbell, he invited him inside and then went into the kitchen to prepare tea, coffee, etc.

The Patriarchate knew this and sent a few people, but they were also priests and monks. Once they came here, they wanted to go to parishes and His Eminence agreed because there were many vacant ones. But because some churches did not have the possibility to accommodate a permanent priest, they also remained in Detroit at the Archdiocese’s rectory and commuted. Manpower was needed here. There was no stove on the ground floor. Only one upstairs by the fathers’ bedrooms and another in the basement, with no sink. No refectory had been set up. Each had his own shelf in the refrigerator and took their meals in turns, individually.

So I started cooking and inviting those present to eat, ringing a bell at noon and gathering everyone around the table. But that required some money. His Eminence, with his discretion, placed on the shelf in the living room a little “box” that everyone ignored at first, even telling me that I am not obliged to cook for them. But how could I be indifferent and let His Eminence prepare his own meals when he had so much on his mind solving the problems of the newly founded parishes?

Personally, I felt at home because I came from a family with many children. We were five sisters of very wise, hardworking, God-fearing parents, who never scolded us but only taught us well and gave us examples of what is good and what is bad. And if during school we all tended to our lessons, during vacations, we all had to lend a helping hand with household chores. Planting, watering, weeding, feeding the livestock. We each had responsibilities according to age.

The American and Canadian people greatly appreciated His Eminence Victorin, honoring him on all occasions and participating to the Romanian events where he was present. 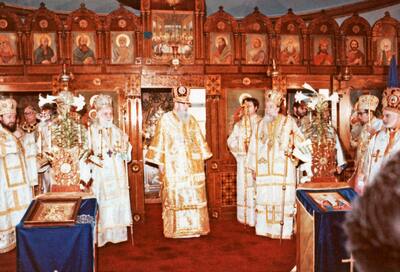 The priests from the Archdiocese did services by rotation in those churches without a permanent priest, but most of the times His Eminence Victorin went instead, to the joy of the faithful, even if the distances were long and he usually traveled by bus. Not only did he not like traveling by plane, but he did not want the parish to spend too much on travel, even though some trips took three days and two nights.

His Eminence did not usually give “orders” but asked when he needed help, “Could you do this?” And if the answer was yes, the second question followed, “But do you want to?” So he allowed us to choose.

All the money he received as donations for the Archdiocese, 10,000–20,000 dollars, he sent to parishes under construction or churches to be painted. He would say, “Until I see the churches and parish houses finished, I won’t make any renovations to the rectory.” And in fact, when he came to America, he came up with the idea of ​​collecting some books, to help the monks and nuns in Jerusalem who lived in great need. He even said that he never imagined he would find so much poverty in such a rich America.

His Eminence Victorin was a true monk, as I had seen in the homeland, who sacredly and strictly respected fasting and the canons of the Holy Fathers. I am glad that we were able to travel to Mănăstioara (Little Monastery)—what a suggestive name—where we met a part of his family: Mama Natalia, two brothers, a sister and two nephews.

May God rest him in peace and place him among the righteous, from where he can continue to help us. Amen.